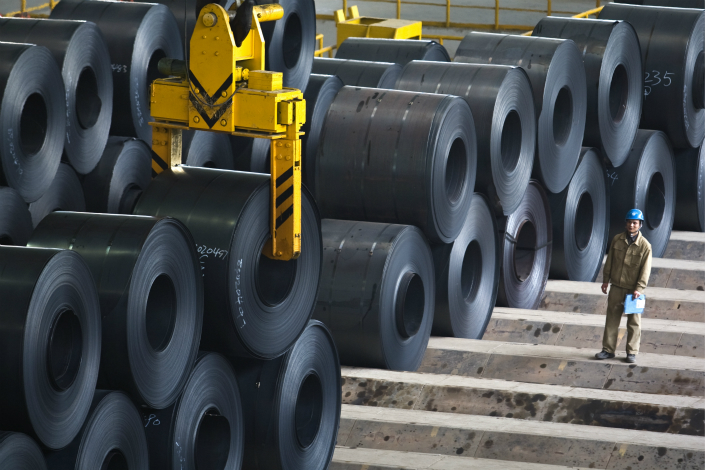 After struggling for years, China major steel makers have forecast better-the-expected earnings results for first half of 2017. Above, a worker stands in a steel factory in Wuhan, Hubei province, in August 2008. Photo: Visual China

(Beijing) — China’s steel sector continues to recover as several big names predict stronger results for the first half as steel prices edge up and efforts to trim overcapacity improve efficiency.

The country’s largest steel maker, China Baowu Steel Group Corp. Ltd., made a profit of 8.7 billion yuan ($1.3 billion) in the first half, according to Shen Ying, chief accountant of the State-owned Assets Supervision and Administration Commission (SASAC), which oversees Baowu and other state-owned enterprises.

Prior to the merger, the two companies each reported losses for 2016, Shen said at a press conference on Tuesday. The merger led to the integration of more than 180 departments within the two companies, significantly improving efficiency.

The overall performance figures of the two state-owned steel makers are not public, but figures from their listed subsidiaries showed how China’s steel sector has been in decline since 2015. The sole listed-arm of WISCO, which has been absorbed into Baosteel, reported a net loss of 7.5 billion yuan in 2015, and a 50% profit drop to 359 million yuan in the first half of 2016.

Other steel companies have also forecast better-than-expected financial results. Hebei-based HBIS Group Co. Ltd. estimated that its first-half profits had tripled to around 1.2 billion yuan from a year earlier, as “steel prices stabilized during the period,” it said in a filing to the Shenzhen Stock Exchange on Monday.

The smaller Hunan-based Valin Steel forecast a record profit of at least 1.2 billion yuan from January to June, after reporting first-half losses every year since 2015.

China’s steel mills were returning to health as a result of an uptick in demand, plus ongoing efforts to reduce overcapacity, especially in the steel and coal sectors, according to Valin’s filing to the Shenzhen Stock Exchange.

Central-government-controlled steel companies, including Baowu, have trimmed 5.95 million tons of excess production capacity in the first six months of 2017, hitting the annual target set by SASAC, Shen said on Tuesday.

The steel maker has also put its loss-making car rental subsidiary ALD Automotive up for sale in a bid to shore up its bottom line. ALD has been bleeding money since 2014.

Steel prices rebounded between late-2016 and February of this year, before edging down over the next two months as the government started to cool the sizzling property market, a large consumer of steel products, said Du Hui, steel analyst at Zhongtai Securities.

However, steel prices have since recovered and will continue to rise, allowing the industry to maintain “good profitability levels,” Du said.