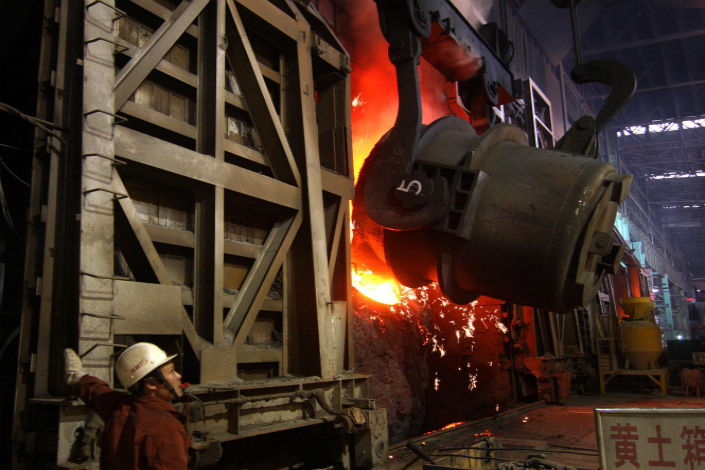 Hunan Valin Xiangtan Iron and Steel Co. Ltd. says its production assets are doing well enough that it can abandon its planned transition into financial services. Above, a steelworker watches a steel making converter in Loudi, Hunan province, in December 2007. Photo: Visual China

But the preliminary asset-replacement agreement between Hunan Valin and Hunan Caixin has now been terminated, the steel maker said Friday. The main reason given was the recent improved performance of Hunan Valin’s steel production assets, as well as Hunan Caixin’s poor performance so far this year.

In the first quarter of 2017, Hunan Valin posted operating revenue of 17.99 billion yuan ($2.65 billion), an 83.21 percent year-on-year increase. The company saw a net profit of 308 million yuan in the first quarter, a huge increase from the net loss of 815 million in the same period last year.

The company’s steel production assets had “made positive progress in structural adjustment,” the company said in its statement.

Hunan Valin’s abandoned plan to move away from the steel industry, which has been plagued by overcapacity and falling prices since 2015, is part of a larger trend of massive companies looking to restructure and even switch industries.

In mid-June, Jiangsu Shagang Group, a privately-owned, Shenzhen-listed steel maker, secured a $3.8 billion deal to buy two internet data companies. Jiangsu Shagang hopes to improve its profitability through the deal, as it recovers from an 80 billion yuan loss in 2015.

Last year, SGIS Songshan Co. Ltd., a Chinese steel maker that had suffered losses for two consecutive years, made plans to sell all of its steel and iron production assets and replace them with financial service assets bought from fellow steel giant Baosteel Group.

But Hunan Valin’s change of plans may mark a turning point in the industry, following its best-performing quarter since 2008. The country’s 36 listed steel companies reported in quarter one the highest combined net profit in seven years — 11 billion yuan, compared with a combined loss of 4 billion yuan a year earlier.

Hunan Valin suspended trading of its shares on the Shenzhen Stock Exchange on June 14 to keep share prices stable while it negotiated its planned asset reorganization. In a statement on Thursday, the company said it would not resume trading until after its deal with Hunan Caixin was officially terminated. Friday’s announcement did not specify a date for the resumption of trading.