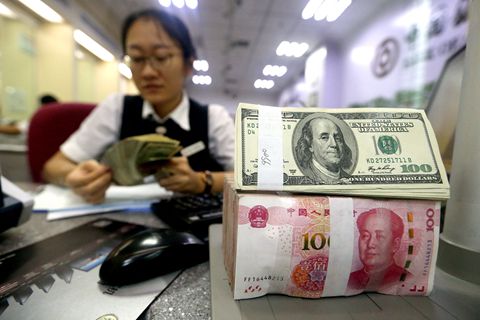 Haitong Asset Management, which obtained a quota of $800 million in January 2015, received a warning and a fine of 7.75 million yuan. Photo: Visual China

China’s foreign-exchange regulator handed out its first penalty to a domestic asset manager for transferring part of its investment quota to ineligible institutions.

Shanghai Haitong Asset Management Co. has been accused of transferring $16.28 million of its quota under the Qualified Domestic Institutional Investor (QDII) program to unqualified institutions between January 2015 and June 2016, the State Administration of Foreign Exchange (SAFE) said in a statement Friday. The asset manager also submitted false materials in its reports to SAFE, the regulator said.

Haitong Asset Management, which obtained a QDII quota of $800 million in January 2015, received a warning and a fine for 7.75 million yuan ($1.17 million), SAFE added.

For two years, China has not issued new quota for domestic institutional investors to legally invest in offshore markets under the country’s capital control, in a bid to stem capital outflows. Existing quotas have become a hot commodity since then, especially amid volatile domestic markets, low money-market rates and last year’s expectations of further yuan depreciation.

Caixin reported earlier that it became a problem for the regulator when non-QDII institutions were buying up existing quotas to relocate their assets for higher returns.

SAFE had said that it reserves the right to confiscate any unused part of a quota older than two years. It also asked companies not to transfer or resell any part of a quota to other institutions. So far, authorities have not reduced any company’s quota as punishment for transferring it to another company.

The fund manager bought nearly $3 million as a QDII investment, and then exchanged the dollars back to yuan at a cheaper exchange rate against dollar during the day, SAFE said. Lion Fund Management had been granted a QDII quota of $300 million in December 2014.

The QDII program, launched in 2006, has granted $90 billion in investment quotas to 132 qualified institutions through December 2015. It has been considered one of the few official channels for domestic institutions to invest abroad.