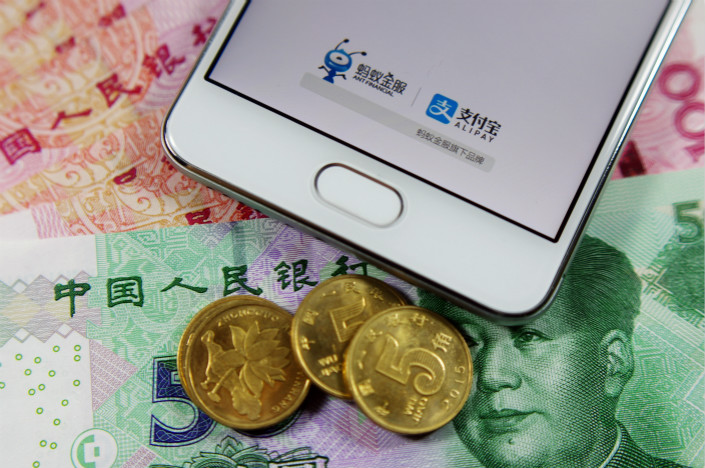 Jiebei, a microlending unit of Alibaba affiliate Ant Financial, had plans to sell 3 billion yuan ($453 million) worth of asset-backed notes on the interbank market on Thursday, but has so far not released any updates on the issuance. On Friday, Chinese financial regulators issued a slew of new rules to clean up the microlending sector, including banning microlenders from raising funds through asset-backed securities. Photo: Visual China

As regulations tighten, highly leveraged microlenders in China are having a tougher time raising funds.

Among new policies to rein in the freewheeling, high-growth industry announced last Friday, banks and other financial institutions are now banned from funding microlenders by buying structured products backed by future payments made on those lenders’ loans.

Before authorities banned microlenders from raising funds through asset-backed securities (ABS) — nearly all of which are exchange-traded — industry heavyweight Ant Financial Services Group had tried its luck on the interbank market, but now appears to be hitting a wall too. One of its microlending units, Jiebei, had plans to sell 3 billion yuan ($453 million) worth of asset-backed notes on the interbank market on Nov. 30, but there have been no updates so far.

Whether they are traded on the exchanges or the interbank market, structured products backed by expected cash flow from loan receivables have significantly boosted the leverage of microlenders. These lenders also raise funds from their own shareholders and take deposits from the public.

Last Friday, the China Banking Regulatory Commission and the central bank issued a slew of new rules to clean up a microlending sector rife with ultra-high interest rates, improper marketing and loan-collection practices, as well as to prevent default risks from spreading to the formal banking system.

The new rules banned unlicensed operations and capped borrowing costs of microloans, and tightened scrutiny of the capital sources of microlenders. The rules forbade banks from investing asset management funds in securitization products backed by cash loans, in a bid to prevent excessive leverage and rein in default risks.

In China, microloans, also known as cash loans, are nonbanking credit services that usually require no collateral, but charge high interest rates. They are usually small, unsecured loans that need to be repaid in six months. They were designed to serve borrowers with limited access to formal bank loans.

“(The issuance of ABSs) won’t resume for a while,” the source said.

Jiebei said last month it had plans to sell up to 30 billion yuan in asset-backed notes on the interbank market. According to the company’s sales document, the subscription of the first batch of 3 billion yuan notes was expected to be completed on Nov. 29.

But Jiebei hasn’t issued any update on the offering since then, fuelling speculation that the plan might also be in limbo amid China’s crackdown on online microlenders.

The last issuance of exchange-traded ABS by Ant Financial were two products issued by Jiebei on Nov. 24 and Nov. 30, which raised a total of 8 billion yuan.

The outstanding ABS products issued by Ant Financial’s two services currently account for more than 70% of all of the 394 billion yuan in microloan-backed ABS products traded at China’s exchanges, according to data from Wind Info.

Ant Financial has been one of the biggest issuers of ABSs in China to finance its online small-loan services “Jiebei,” which means “just borrow” in Chinese, and “Huabei,” which means “just spend.” Huabei is basically a virtual credit card that allows users to pay for things they buy on the online marketplace Taobao.com in installments. Jiebei provides cash loans to broader borrowers.