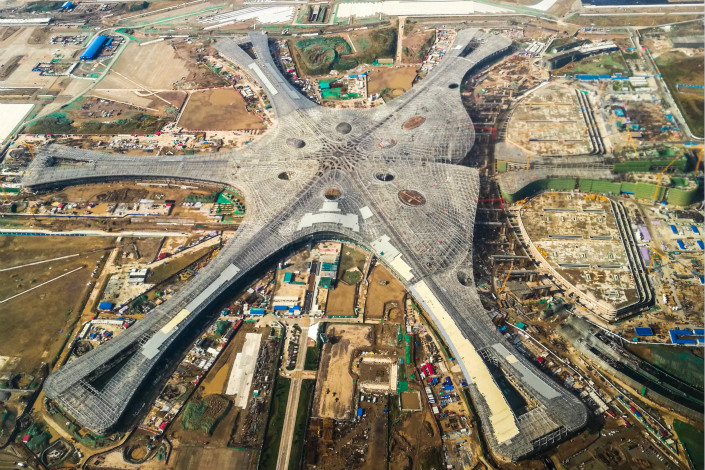 One civil aviation official has argued that Beijing's new airport (pictured) will not help ease congestion at the capital's existing airport, as the problem is due to airspace restrictions rather than insufficient infrastructure. Photo: IC

Dominating different hubs across the country, China’s three biggest state-owned airlines have each built their own sphere of influence in the country’s white-hot civil aviation market. But the balance is about change.

The game changer will be the new, seven-runway airport being built in Beijing’s southern suburbs. The airport, which will be the world’s largest and capable of handling 100 million passengers a year by 2040, has become the new battlefield for airlines fighting for a slice of the capital city’s rapidly growing commercial flight market.

The opening of Beijing Daxing International Airport, scheduled for 2019, will cause a reshuffle in Beijing’s civil aviation market as facilities and resources will be reallocated among major carriers.

Air China, the country’s flagship carrier and the biggest airline in the Beijing market, is facing looming threats from rivals China Eastern Airlines, which dominates China’s financial center of Shanghai, and China Southern Airlines, the major carrier based in southern China’s export gateway of Guangzhou, as the new airport will offer them space to run more routes out of Beijing.

According to a construction plan approved by the State Council in July 2016, the new Daxing airport will be designated as the hub for members of the SkyTeam alliance, a global group of airlines that includes China Eastern, China Southern, Delta Air Lines and Air France-KLM. Under the plan, China Southern and China Eastern will each account for 40% of the airport's passenger traffic and move their existing operations away from Beijing Capital International Airport.

Meanwhile, facilities at Beijing Capital will be left mainly to Air China and its fellow airlines in the Star Alliance, such as Air Canada, Lufthansa and United Airlines.

Yu Zhanfu, a principal consultant at Roland Berger, said allocating airlines based on the alliance to which they belong might be the most convenient solution as alliance members often have code sharing and flight connecting agreements.

But the government-ordered allocation has triggered debates, and a final version of the plan hasn’t yet been settled. Major airlines are expecting to get access to the new hub while keeping a presence in the old one.

As of October, both China Eastern and China Southern have started immense construction projects on their new hubs at Daxing Airport. China Eastern, which is planning to invest 13.2 billion yuan ($1.9 billion) in the new facility, said it would deploy 150 to 200 planes and over 20,000 employees at the new hub. China Southern has decided to invest 14.8 billion yuan in its facility, which will support 250 aircraft and 20,000 employees.

Air China, on the other hand, is seeking to allocate one of its subsidiary airlines to the new airport to get a foothold at the new facility, sources close to the matter said.

With the opening of the new airport, private and foreign airlines are also closely watching opportunities to gain more access to the Beijing market.

No one wants to miss the opportunity to access an airport that will handle 100 million passengers a year, said Shao Fengru, a transportation expert at the China Academy of Civil Aviation Science and Technology. “Everyone will fight for the chance,” Shao said.

Major airlines are making moves as the opening of Daxing Airport approaches. Overseas media reported in July that China Eastern was considering selling a majority stake in its wholly owned subsidiary Shanghai Airlines to make it an independent company, which would allow it to stay at Beijing Capital.

China Eastern controls over 50% of air traffic flow between Beijing and Shanghai, one of the most profitable domestic routes due to the large number of routine business travellers between the two metropolises.

But after moving to Daxing Airport, China Eastern is likely to lose some frequent business travellers to Air China because the new airport, 46 kilometers (28.6 miles) south of the city center, is further away than Beijing Capital.

China Southern is also mulling over how to keep one of its subsidiaries, Xiamen Airlines, at Beijing Capital to preserve its presence at the old hub, sources close to the company said.

Another source with knowledge of the situation said Air China is also seeking to gain access at the new airport by allocating its subsidiary Beijing Airlines to Daxing.

The State Council’s plan didn’t mention to which airport Hainan Airlines, China’s fourth largest airline, would be designated. But Capital Airlines, a subsidiary of Hainan Airlines, will be moved to the new airport, according to the plan.

Private budget airlines, which have had little access to the Beijing Capital, see the new airport as a good opportunity to break into the capital market. Caixin learned that Spring Airlines, Juneyao Airlines and Okay Airways have all signed agreements with Capital Airport Group (CAG), Beijing’s airport operator, to build an aviation base in the new airport. But the final decision on whether these companies can access Daxing Airport will depend on the Civil Aviation Administration (CAAC), said Wang Yu, chairman of Spring Airlines.

The 102 foreign airline companies that are currently operating at the Beijing Capital are also closely monitoring the possible changes. Although the plan said all SkyTeam members will be moved to the new airport, a manager at SkyTeam said there is possibility that foreign airlines will be granted the option to remain their current locations.

Nevertheless, airlines expect the new airport will offer them a chance to get routes that they had in the past been unable to access, especially long-range international routes.

In August, the CAAC proposed in a draft regulation to introduce a bidding system for domestic airlines to open international routes, ending a decade-long restriction to limit international routes for many long-range destinations to a single airline.

If the regulation were to take effect, airlines will get more opportunities to fly between the new facility and international destinations.

China Southern, which became the first Chinese airline to order an Airbus A380 in 2005, has bet that the immense investment on the jumbo jet will help it expand its presence in Beijing. However, the company has not been able to obtain a single arrival or departure slot for a long-distance international route at Beijing Capital.

Beijing already has two airports to serve its over 20 million residents, not to mention all the travelers who pass through on connecting flights.

Beijing Capital, located in the municipality’s northeast, is one of the most congested airports in the world. It was designed to handle 82 million passengers a year, a number it surpassed by 12 million passengers in 2016. The airport is the nexus of an extensive air route network that links 147 domestic and 132 international destinations.

Beijing has another, much smaller civilian airport called Beijing Nanyuan Airport, which is also located in the city’s southern outskirts. Beijing Nanyuan has an annual capacity of 6 million. Once Daxing Airport opens, Nanyuan will be relocated away from Beijing.

Beijing started doing the due diligence for the new airport in 1993, according to the environmental assessment report for Daxing Airport. It wasn’t until 2008 that authorities decided on the airport’s location.

The new airport is expected to take some of the stress off overtaxed Beijing Capital. According to the environmental assessment report, Beijing Capital’s capacity has fallen short of demand by 400 flights a day because it has run out of arrival and departure slots. Meanwhile, flight delays have caused headaches for passengers and airlines as the airport has approached full capacity.

Under the construction plan, Daxing Airport is equally suited to be an international hub as Beijing Capital, and both airports are expected to be among the world’s largest in terms of passenger volume, according to Roland Berger’s Yu. “(The new airport) will offer an alternative option for travelers and the two will compete in services,” Yu said.

But some industry experts doubt the necessity of building another mega airport in Beijing. “Maybe there will be enough demand for two major aviation hubs in one city in the future, given China’s massive market size and population, but today it is a waste of resources,” said Ma Chongxian, deputy general manager of Aviation Industry Corp.

Despite the frequent delays at Beijing Capital, the ground facilities like runways and terminals haven’t been fully used, analysts said. And the key problem stems from inadequate airspace.

Most of China's airspace is reserved for military use, meaning civilian aircraft are prohibited from flying over much of the country. It has been increasingly difficult to accommodate the rapidly growing demand for commercial flights in this limited space, resulting in a notorious amount of delayed flights.

Public calls to reform China’s airspace management system and grant more airspace or more flexibility for civilian use have grown over the years.

If the airspace limits stay the same, the new airport will hardly have any significant impact on the current situation, said a CAAC official. “It is like building new bus stops without expanding the road. It won’t do much to help the traffic congestion,” he said.