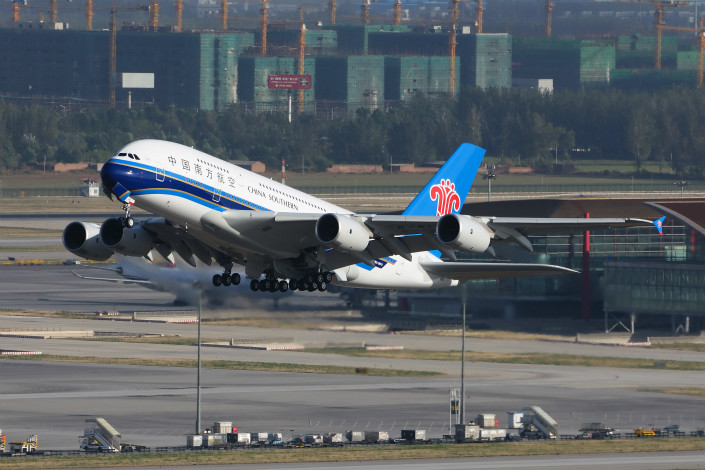 The parent of China Southern Airlines broke ground on its new hub in Beijing on Tuesday as the Guangzhou-based carrier seeks to expand its turf with the construction of the capital’s new airport.

The groundbreaking illustrates how China Southern Airlines Co. Ltd. is seizing the opportunity presented by Beijing Daxing International Airport, set to open in 2019, which is being built to take some of the stress off the overtaxed Beijing Capital International Airport.

Beijing Capital, located in the municipality’s northeast, is one of the most congested airports in the world. It was designed to handle 82 million passengers a year, a number it exceeded by 12 million passengers in 2016. Meanwhile, the city’s other operating civilian airport — Beijing Nanyuan Airport — has an annual capacity of only 6 million.

China Southern will send 250 aircraft and 20,000 employees to the new Beijing Daxing International, which is being built 46 kilometers (28.6 miles) south of the city center. It was designed to handle 72 million passengers a year.

China Eastern Airlines Corp. Ltd. will join China Southern in operating a new hub out of Beijing Daxing International. China Eastern, which began constructing its new hub in June, plans to operate 150 to 200 planes out of the new airport.

Both companies have long sought to beef up their presence in the city, whose airline market has been dominated by their Beijing-based rival Air China Ltd.

In 2005, China Southern became the first Chinese airline to order an Airbus A380. The purchase was a bet on getting a bigger presence in Beijing, as the long-distance jumbo jet would be most profitable flying out of the capital due to the city’s large demand for long, overseas flights.

Despite its immense investment in the planes, China Southern was unable to obtain a single arrival or departure slot for a long-distance international route at Beijing Capital.

Shares of Shanghai-listed China Southern inched up 0.12% on Wednesday, while its Hong Kong-listed shares rose nearly 1.1%.