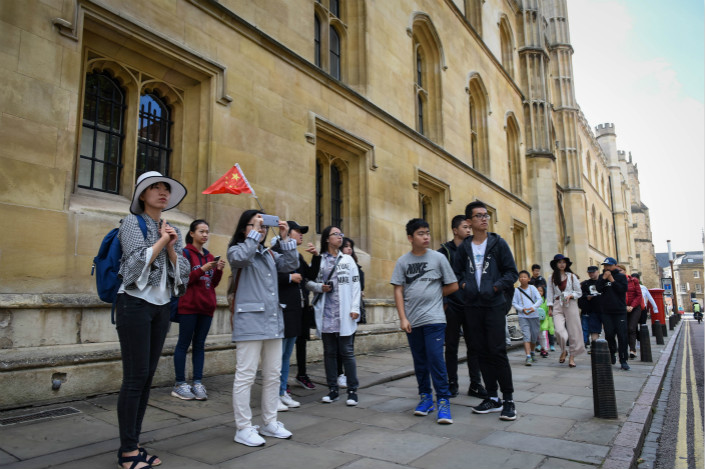 China Mobile said the addressable audience for its new MVNO service, called CMLink, could include 433,000 British-Chinese living in the UK and 82,000 Chinese citizens who are there studying on student visas. Photo: Visual China

China Mobile International (CMI) will launch the service as a mobile virtual network operator (MVNO) in partnership with U.K. giant BT Group Plc., the company said in an announcement on Wednesday in the UK. It said the service will target Chinese people living, working and studying in the country, and more broadly be aimed at Chinese people based in Europe.

“While China Mobile serves 880 million domestic mobile subscribers, CMI — its operating subsidiary responsible for international business — is breaking new ground in overseas markets,” said CMI Chairman Li Feng. “We expect the UK launch to be a new chapter in CMI delivering compelling digital services that break down barriers of communication for global consumers while fostering open exchange between Belt and Road companies,” he said, a reference to China’s “One Belt, One Road” initiative that encourages Chinese companies to develop infrastructure around the world.

China Mobile said the addressable audience for its new MVNO service, called CMLink, could include 433,000 British-Chinese living in the UK and 82,000 Chinese citizens who are there studying on student visas. Frequent Chinese travelers to Britain could also find the service attractive.

MVNOs are relatively common around the world, used by well-known brands to try and extend their reach to other markets without incurring the expense of owning and operating a network. China is also experimenting with MVNOs at home, with China Mobile and its two main rivals both leasing their network capacity to third-party operators for such virtual networks.

China Mobile’s move also extends a business model that sees globally-minded Chinese service providers taking some of their earliest steps abroad by catering to the millions of travelers from their home market. Others who have taken such an approach include electronic payment service providers Alipay, as well as the payment service linked to Tencent Holdings Ltd.’s popular WeChat service.

China has been encouraging its newly minted corporate champions to go abroad over the last decade in search of new business. More recently it has also pushed infrastructure-related firms like China Mobile to go out and play a role in Beijing’s “One Belt, One Road” initiative.