A Poster Child of the Cultural Revolution Dies Aged 56 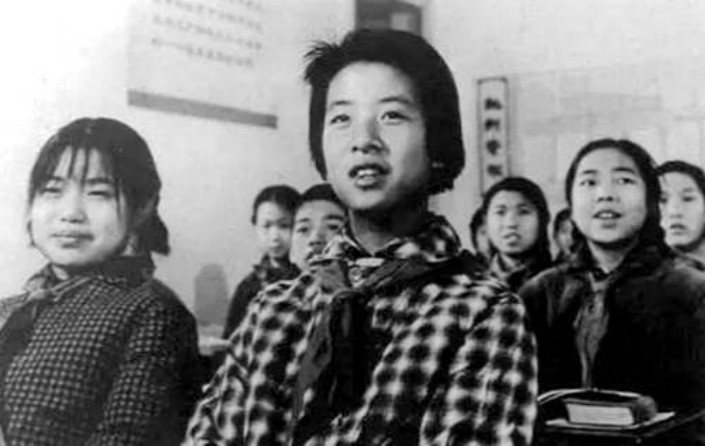 Huang Shuai was featured in numerous revolutionary posters, magazines and books, and was invited to speak at rallies staged by the revolutionary left.

Huang Shuai, who became a household name after inadvertently triggering a crackdown on academia during China’s Cultural Revolution, has died at the age of 56.

She was a mere fifth-grader when a letter complaining against her primary school teacher made her a poster child of “the fight against revisionist elements,” which saw hundreds of teachers and academics sent to the countryside and forced into hard labor.

Her legacy as “a little daring general of the anti-establishment struggle” haunted Huang for much of her life.

The former editor at a publishing house affiliated with the Beijing Institute of Technology died of an unidentified form of cancer on Dec. 10, Law & Life, a bimonthly magazine, reported.

The news of Huang’s death, which went unnoticed among the post-1970s generation, triggered an outpouring of grief mixed with pain among those who lived through the most tumultuous decade of modern Chinese history, from 1966 to 1976.

Huang was a student at Zhongguancun No. 1 Primary School in Beijing’s Haidian district when she wrote a letter to editors at the state-controlled Beijing Daily in 1973, complaining about how she had been isolated from the rest of her class at the behest of her teacher.

The teacher’s order came in response to Huang’s critical comments written in an open diary, in which she wrote that the teacher was wrong when he threatened to cane her for breaking minor school rules, according to several history books.

Huang claimed she had nightmares and cried at night over the mistreatment, and expressed in the letter her resolve to “fight on as a junior Red Guard.”

“What have I done terribly wrong to deserve this punishment?” she asked in the letter. “Are youth in Mao Zedong’s era still condemned to be the slaves of an old education system dictated by rigid teaching measures?”

In a rare interview with Shanghai-based Xinmin Evening News in 2009, Huang said she wrote the letter simply in the hope that it would help resolve the issue between the teacher and her. She said she immediately regretted her actions after posting the letter because she was wrong in the first place and her teacher had treated her well in general.

But it was too late, and she could do little after the populist forces on the left — led by Mao’s wife, Jiang Qing, and her accomplices — quickly seized upon it and blew it up into something beyond a dispute between a student and a teacher.

Instead, the row was upheld as an example of the class struggle between proletariat and bourgeoisie, and the divergence of two paths guided by traditionalism and revisionism.

The Beijing Daily and the People’s Daily, both controlled by the revolutionary left at the time, later published excerpts of her letter with an editor’s note, catapulting the 13-year-old into the national limelight. Soon Huang became a poster child for the far left’s campaign against China’s establishment.

Huang was featured in numerous revolutionary posters, magazines and books, and was invited to speak at rallies staged by the revolutionary left.

Many schoolteachers and university professors lived in fear amid this anti-establishment furor, because anything they might do to discipline students could be dismissed as “rigid or an act of revisionism.” This may have forced them to write long confessions or self-criticisms, or face public humiliation.

Huang is among several infamous icons of the Cultural Revolution, who were used by the left to whip up zealous ideological campaigns that pit “leftists against rightists” — or workers, peasants and soldiers against scholars. Often these were violent confrontations.

Massive disruptions across the spectrum of Chinese political, social and economic life during this tumultuous decade pushed the country to the verge of collapse.

Research institutions, universities and schools were among those hardest hit as scholars, teachers and artists were targeted for physical abuse or were sent to factories and labor camps in remote rural areas for reeducation.

Qi Hongrui, Huang’s teacher, was lucky to keep his job after he apologized over the episode, he said in media interviews back in 2006.

He never thought of punishing Huang though he admitted that he was young himself and might have been a little harsh on her. Qi said he recalled visiting Huang at her home on a day she was sick, and even the day when her letter was published on Beijing Daily.

Qi said Huang and several of her classmates visited him after she was admitted to college.

“We spent the entire day rowing in a lake inside the Summer Palace,” he said. “We didn’t touch on what had happened between us as we felt we had both made peace with that incident,” he said.

But in a twist of fate, Huang was briefly targeted for criticism and even bullied over her role shortly after the end of the Cultural Revolution. Her father, a zealous leftist, was sent to prison, though there is little information on the reason for his downfall.

Huang was nearly barred from attending college after a background check linked to her activities during the Cultural Revolution, although she had passed the national college entrance exams in 1979. She was eventually allowed to enter the Beijing Institute of Technology, her top choice, after rumored intervention from someone high-up in the administration. This figure is supposed to be Hu Yaobang, the Communist Party's general secretary at the time, who noted that she was too young to be held accountable for what had happened during the Cultural Revolution.

Huang had kept up the hobby of writing a diary, but her mother, who was horrified by what had happened to her, is said to have knelt down in front of her when she entered college, begging her to stop and burn all her previous journals, Huang wrote in a collection of diary entries published in 1993.

Huang said she didn’t return to her hobby until she went to study in Japan two years after her graduation from the Beijing Institute of Technology in 1984. She was part of an army of Chinese youth leaving to study abroad in the 1980s and she stayed in Japan until 1998.

Information about her life after the Cultural Revolution is hard to come by. Her years in college and in Japan helped shield her from the public glare, she told Xinmin Evening News in the 2009 interview.

She had married and had a son who was born in Japan in 1996, according to the newspaper.

When asked by the newspaper about her thoughts on what happened to her during the Cultural Revolution, she said “during my entire adolescence, what I felt the most was my own hurt, the pain of that era and the pain that others went through.”