The Artist Who Has Never Surrendered 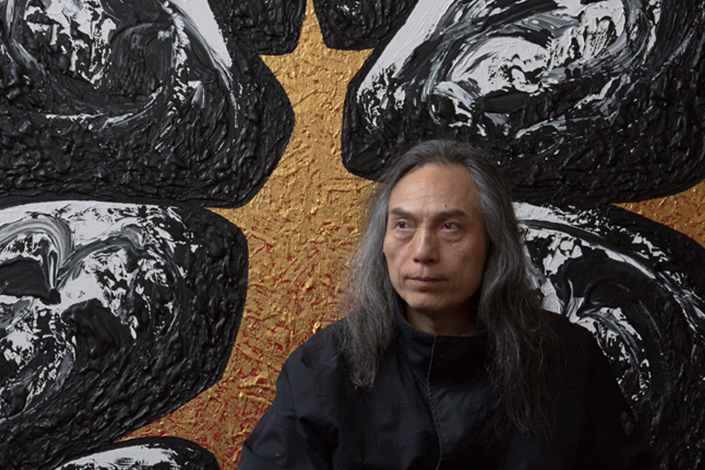 Ma Desheng has been recognized as one of "the protagonists" of an artistic awakening that dawned during the tumultuous Cultural Revolution, said Dai Haoshi, a former curator for the Guimet Museum in Paris, home of one of the world’s largest Asian art collections. Photo: Andrew Cohen/ ArtAsiaPacific.com

Artist Ma Desheng was born in Beijing in 1952 and stricken with polio at a young age. Despite partial paralysis, he graduated from middle school and took a job at an electronics plant. Later, during the Cultural Revolution, he worked as a draftsman.

Ma yearned for something more out of life. Deep inside this young draftsman on crutches was an artist’s heart aching for an expressive outlet. He followed his heart, refusing to surrender to physical limitations.

Ma was particularly fascinated by Western oil paintings and wood carvings. He learned to paint, carve and write. Soon, the young Ma found himself a career path that carried him through the Cultural Revolution and shaped a successful, yet tragic, life as a popular artist.

In 1979, Ma and his fellow artist Huang Rui sponsored a small, outdoor exhibition for a few guests along an iron fence near the National Art Museum in Beijing. They hung several paintings and wood carvings on the fence and called the exhibition “The Stars.”

Word of the exhibition quickly spread, and soon the capital city was buzzing about the messages on that iron fence. The media praised the artworks and extolled Ma as a new standard-bearer for modern Chinese fine art.

Ma pursued various mediums of self-expression. He wrote an existential short story set in a desert called “The Skinny Wretch.” He produced woodblock prints based on the everyday struggles of common people: One depicted an exhausted garbage collector rolling a cigarette. In another, a peasant on his knees raises his hands to the sky.

“During the Cultural Revolution, artistic self-expression and unorthodox ideas were severely criticized, and even punishable by internment and hard labor,” according to a Ma retrospective written by arts reviewer Andrew Cohen for the March-April 2014 issue of Arts Asia Pacific magazine. “Throughout this societal upheaval of the late 1960s and early 1970s, Ma maintained a stony, conformist exterior while secretly honing a more radical sensibility with like-minded confidants.”

In fact, Cohen wrote, Ma “and his circle of artists and poet friends held underground meetings in dimly lit and smoke-filled hutong flats.”

Ma explained: “We kept our work at home, hidden. When we had girls pose as naked models, we would put black curtains over the windows so no one could see. If there was a knock on the door, the girl rushed to put her clothes on.”

“We lived under constant fear, moral pressure,” Ma said. Theirs was a “fear of being criticized and arrested.”

Ma and Huang are recognized today “as the protagonists” of an artistic awakening that dawned during the tumultuous Cultural Revolution, said Dai Haoshi, a former curator for the Guimet Museum in Paris, home of one of the world’s largest Asian art collections.

The iron fence exhibition “was taken down after two days by the local police and was not exhibited (again) until August 20, 1980,” Dai said. “But this time, the exhibition was finally held inside a gallery.”

The gallery exhibit attracted more than 40,000 visitors within 10 days. It was the first, avant-garde art exhibition held in China since the Cultural Revolution.

Subsequently, Ma and Huang were invited by other artists to visit them in more than 20 big cities nationwide. As their popularity grew, they were invited to join a variety of debates and forums.

“People noticed that a new art genre was being put forward,” Dai said. “It was spontaneous and irreversible.”

At one street-side event, Ma faced a large crowd while leaning on his crutches and delivered a passionate speech. “My compatriots!” he said. “What do our farmer brothers fill their stomachs with? They feed themselves merely with cabbage stalks!”

Like many Chinese artists of his generation, Ma hungered for the kind of formal training denied during the Cultural Revolution years when art schools were forced to close. Earning a graduate degree would have given him an opportunity to work as an official, salaried artist.

In 1977, Ma applied to the then-recently re-established Beijing Central Academy of Fine Arts. But entry was denied.

“One reason for the rejection,” Ma explains, “was due to my handicap. The other was because I was a very liberal thinker.”

Undeterred and with a sense of artistic destiny, Ma pressed forward with a personal training program. He relied on skills he learned as a factory draftsman to improve his talents as a woodblock printer. He did not surrender.

Ma was known to be straightforward, even tactless. He liked to drink, and whenever he got drunk he would become erratic and sometimes harmlessly bite the shoulders and arms of his companions.

Ma’s behavior drew attention from a group of foreigners living Beijing. They grew fond of his art and enjoyed his company. Among expatriates in the Chinese capital there was a saying “when you’re here in Beijing, go see the Great Wall first and then come see Ma Desheng.”

Ma liked to dress in green military uniforms and wear shoulder-length hair, even though his appearance prevented him from being allowed to dine in at least one fancy restaurant.

As the story goes, Ma told a restaurant doorman who refused him, “I am only here for a bowl of noodles.” The doorman joked back, “then go back to the Chongwenmen street food stands, please.” But before he could go, the restaurant manager arrived and recognized the artist, who happened to be his personal guest.

Ma moved to Paris, where he lives today, in 1986. He was the first Chinese ink painter to have an exhibition sponsored by French Ministry of Culture. Ma has also continued writing, focusing on poetry.

Ma met his longtime companion Barbara Holesten in 1990 at a New York gallery that was hosting a Chinese painters’ exhibition.

Holesten was an attractive and wealthy German-American psychiatrist in her early 30s. She was also an art collector who frequented galleries.

Holesten and Ma communicated in French, their common language, and fell in love. Soon, they were living together in a New York apartment.

A devoted companion, Holesten left her office and returned to their apartment every noontime to prepare Ma’s lunch. She then went back to work.

Barbara wanted to marry, but Ma refused. He doubted he could earn enough in New York to be their breadwinner, and he did not want to financially rely on her. True, he could support himself by selling paintings in Europe. But the American market was different. They remained unmarried.

Once during a trip to a topless beach in Greece, Holesten asked Ma to strip and walk with her on the beach. At first, he was reluctant. But after she said “I think your body is beautiful,” he assented.

In 1992, Barbara bought a car specially equipped for a disabled driver and gave it to Ma. Later, on a highway during a road trip to Miami, their vehicle was struck head-on by a pickup. Barbara died instantly. Ma lost his legs.

Today, Ma lives in a Paris apartment and needs daily care. Only his hands function normally. Yet he can still use his hands to create.

In 2002, Ma completed several new, acrylic-on-canvas works depicting human figures with snow-like textures and traditional ink styles. He had not surrendered. He still has not.