By Li Liuqian and Coco Feng 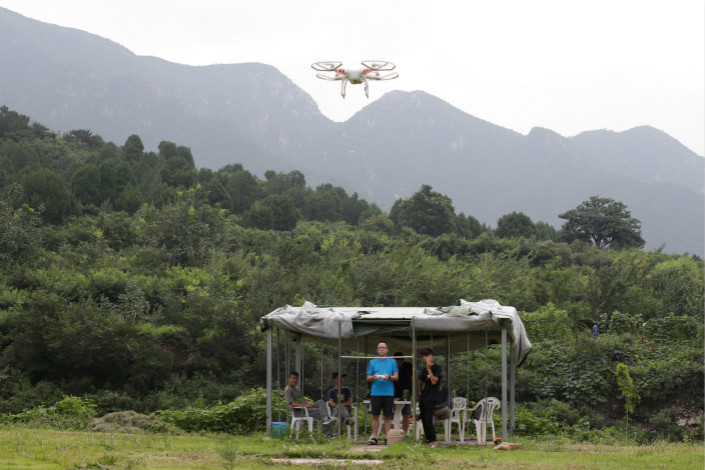 DJI leads the world in consumer drone sales, with a global market share of 70%. But the company was a latecomer to agricultural devices, with its first launch in March 2016. Photo: Visual China

The world’s top seller of consumer unmanned aerial vehicles (UAVs) has released updated versions of its agricultural drone, with price tags low enough to draw the ire of competitors for “disturbing the industry.”

Shenzhen-based DJI Technology Co. Ltd. launched two new versions of a drone used for agricultural purposes, such as spraying pesticides on crops — which the firm will market at a 12% lower cost compared to the previous model, released in November last year.

Rivals argued that resultant price wars could weaken the ability of companies in the industry to provide post-sales services — such as instructing customers on the use of the devices.

A representative from an agricultural drone maker in Wuxi, in East China’s Jiangsu province, told Caixin that DJI has made a huge impact on the sector. The representative said that some customers have said that the money they spent on one of the Wuxi company’s products could be used to purchase three to four DJI drones.

But the company makes oil-fueled drones, which are typically more expensive than electric UVAs such as the DJI ones.

“Drones for agricultural care are not only about the devices and their prices,” said Zhou Guoqiang, general manager of smaller rival Anyang Quanfeng Aviation Plant Protection Technology Co. Ltd. “The future of the industry will focus on the performance and efficiency of drones.”

DJI leads the world in consumer drone sales, with a global market share of 70%. But the company was a latecomer to agricultural devices, with its first launch in March 2016. It has adopted a price-reduction strategy for its newer versions, with the cost of the latest model dropping to 29,999 yuan ($4,500) from the initial cost of 52,999 yuan.

In the agricultural drone sector, the company had a market share of nearly 70% in China by November, according to DJI. But the company hasn’t yet turned a profit, Chen Tao, who is in charge of DJI agriculture UAV sales in China, told Caixin.