Shanghai to Cap Population at 25 Million by 2035 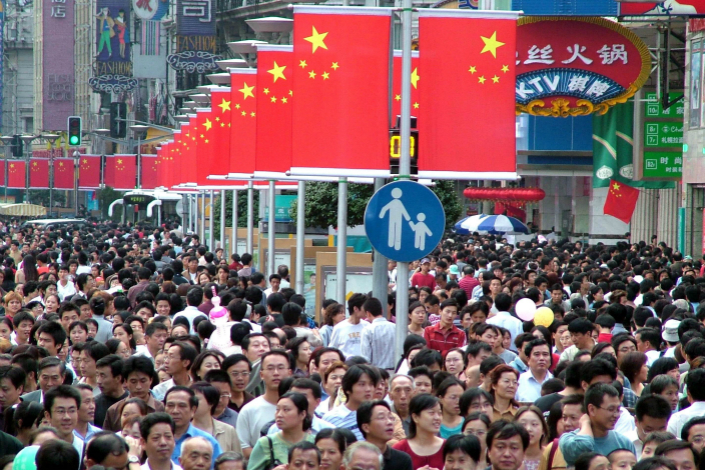 Pedestrians crowd Nanjing Road in Shanghai, whose population stood at 24.2 million at the end of 2016, up 0.4% from a year earlier. Nearly 40% of the city’s residents were migrant workers. Photo: Visual China

China’s cabinet said it has approved a plan for Shanghai to cap its population at 25 million by 2035 to ease pollution and relieve the strain on public services.

In an attempt to contain urban sprawl, city planners were told they could only release up to 3,200 square kilometers of government land for development over the next 18 years, according to the document approved by the State Council on Monday. That land area is roughly half the size of the city at the end of 2015.

Shanghai’s population stood at 24.2 million people by end of 2016, up 0.4% from a year earlier, largely due to an influx of workers from other parts of the country, government data showed. Nearly 40% of the residents in China’s financial hub were out-of-town workers, according to official statistics.

The city has seen its traffic woes worsen and air and water quality suffer as a result of unrestrained development.

Last year, Shanghai experienced 276 blue-sky days, or days when the air quality is considered to be good, down from 343 in 2012, according to the Shanghai Environmental Protection Bureau.

The city government issued its latest smog advisory on Sunday, when the level of cancer-causing PM2.5 particulates rose above 200 micrograms per cubic meter, indicating heavy pollution.

In September, Beijing announced similar plans to cap its population at 23 million by 2020. In recent months, the Chinese capital has relocated dozens of migrant-employing wholesale markets to outside the city limits and demolished factories and villages deemed “unsafe or illegal” — all in an effort to stem the tide of rural workers coming to the city.