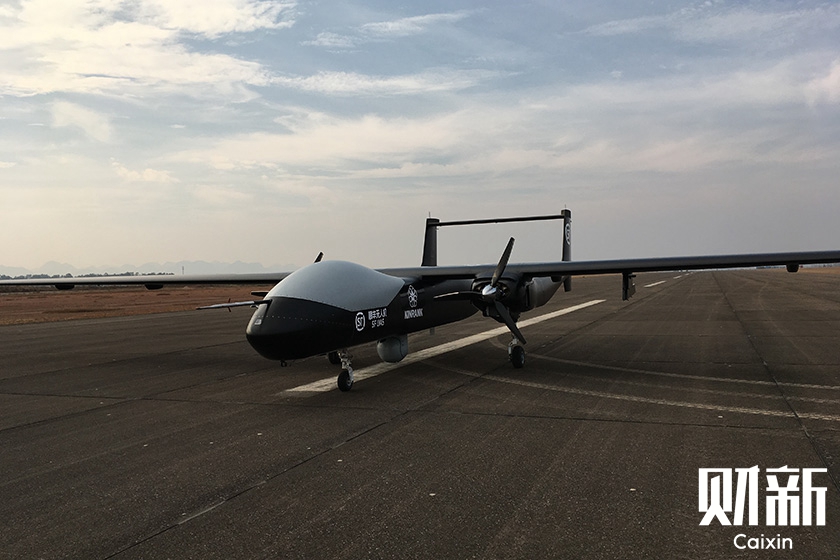 SF Express hopes to begin commercial use of large delivery drones by 2019 and is exploring other uses for its drones, such as emergency logistics, the courier giant’s Vice President Li Dongqi told Caixin.

The company completed the first emergency logistics testing of its newest drone model Tuesday. After taking off from an airport in Southwest China’s Yunnan province, the drone — which is the third developed by SF Express and its partner Sichuan Tengdun Technology Co. Ltd. — successfully simulated a preprogramed delivery of spare parts in an emergency situation.

SF began a pilot drone delivery service in southeastern China in July, using smaller drones that can carry up to 25 kilograms (55 pounds).

With a wingspan of 20 meters (65 feet), takeoff weight of around 3 metric tons (3.3 tons) and the ability to carry 1.2 tons in cargo, SF’s latest large drone model can reach a maximum speed of 250 kph (155 mph), and travel up to 3,000 kilometers at a time. The test flight comes just two months after SF tested its AT200 delivery vehicle, China’s heaviest drone at the time. The company also tested an amphibious large drone in July.

Drones are easier to maneuver and more convenient than traditional aircraft, Li said. They can be put to use delivering supplies to mountains and islands, he added.

Other applications for SF’s drones could including helping farmers in western China overcome geographical isolation and transport their goods to other areas, according to Li.

SF currently owns 41 aircraft, including manned and unmanned vehicles. It is building a cargo airport in Ezhou, Hebei province, which is expected to become operational by 2021.

To realize SF’s plan for commercial large-drone use by 2019, the company must overcome some regulatory hurdles. Larger drones don’t fit into existing aircraft categories, and the Civil Aviation Administration of China is still in the process of designing an airworthiness certification system for heavier vehicles.