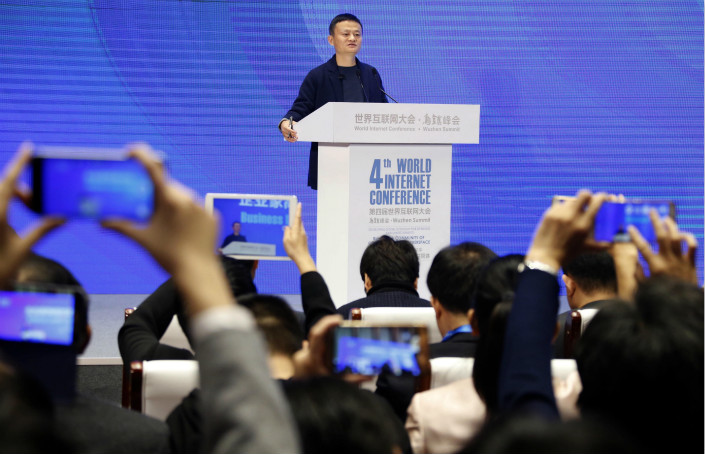 Using a combination of initials to characterize groups of big and fast growing-companies is nothing new. Just as the United States has FANG — Facebook, Amazon.com, Netflix and Alphabet (Google) — China has its own combinations, including BAT, BATJ, TMD and CV.

BAT refers to the primary three Chinese internet companies — Baidu Inc., Alibaba Holding Company Ltd. and Tencent Holdings Ltd. The combination was the dominant keyword of the Chinese new economy from 2012 to 2016. In 2016 and 2017, it evolved to both AT and BATJ, reflecting the subtraction of Baidu and addition of JD.com Inc. respectively.

The changes in the combinations revealed changes in the structure of cybergiants in China. The combination TMD on the other hand referred to a group of rising stars that includes Toutiao, Meituan.com and Didi Chuxing. In many vertical industries, startups would go in the red very quickly; as a result, many initial combinations were invented to describe these industries’ “unicorns,” or startups valued at over $1 billion.

One to two years before the Nasdaq tech-stock bubble burst, the BAT companies started their empires in search engine, e-commerce and social networks respectively. After competing with international tech giants, BAT consolidated its grounds in the Chinese market. In the past few years, BAT expanded rapidly and infiltrated every layer of China’s internet society, as well as investing offline. From O2O (online to offline), culture and entertainment, health and medical to finance, all the vertical industries were described as “scenarios” by the internet giants and were conquered one by one. The BAT companies used their advantages in capital, users and technology to invest and incubate startups, which in turn forced the startups to choose sides among the trio.

But BAT’s structure transformed rapidly in 2017. Baidu’s core business, its search engine, is no longer a dominant business in the mobile internet age; Baidu’s revenue and market capital increasingly lags behind Alibaba and Tencent. By the start of 2017, Baidu had made the most decisive strategic turn since its founding.

The last straw in the change in Baidu’s direction was the Wei Zexi incident of a year ago. A patient named Wei Zexi, who had a rare disease, searched on Baidu for a hospital. He ended up checking into one run by investors from Putian, Fujian province, where he died. Privately owned Putian hospitals has long been criticized for their irregular and irresponsible business models, but Baidu had turned a blind eye on the quality of these hospitals for a long time while relying on them for advertisement income.

Baidu started to move toward the artificial intelligence (AI) industry in 2016. Lu Qi, a computer science expert who formerly worked at Microsoft Corp., was hired as Baidu’s chief operating officer in January 2017. Around the time that Lu joined, Baidu discarded its noncore businesses such as music and O2O, and began to focus on AI and information flow services. Baidu’s effort on AI includes the autopilot system called Apollo; the company is currently trying to cooperate with car manufacturers to develop self-driving cars.

Baidu also suddenly exited the offline battle, with two mergers and acquisitions characterizing that. Baidu’s food delivery service was acquired by another food delivery company called Ele.me in the third quarter in 2017. Alibaba, which was the largest shareholder of Ele.me, reaped the benefits from this transaction. Baidu’s online ticketing service, Maoyan, also merged with another online ticketing platform, while Tencent brokered this transaction and increased its investment, tightening the grip on this market.

While the competition between the duopoly of Alibaba and Tencent is getting fierce, the front line of this battle is between Ant Financial Services Group and Tencent’s WeChat, both of which want to win the payment-service war. Alipay, affiliated with Alibaba, has been consolidating its stance in online payment services for more than a decade, but was losing ground to WeChat Pay in offline payments in 2015 and 2016. The initial attempt to implement a social network feature in the Alipay app failed in 2016, but in 2017 Alipay regained parity after focusing on getting new customers among small-to-midsize stores, and providing two-way financial services between commercial and individual users.

The bigger battleground between Alibaba and Tencent is their respective ecosystems, with the climax of this rivalry occurring during the Wuzhen World Internet Summit. This summit is considered the largest party of Chinese new-economy companies, but this year a dinner became center stage. A dinner event initiated by JD.com’s founder, Liu Qiangdong, and Meituan’s founder, Wang Xing, was joined by Tencent’s founder, Pony Ma, along with many leaders of smaller internet companies that Tencent invested in.

On the other side, Jack Ma, Alibaba’s founder, was sitting alone in his hotel eating noodles. This difference was quickly seen as the embodiment of Alibaba and Tencent’s respective ecosystem: While Alibaba is about control, Tencent is more open.

Tencent’s dinner event also included two other initial combinations. The “J” in BATJ is JD.com, an online retail company that claimed to be the Amazon.com of China when it went public in 2014. By establishing a big logistics service group, JD.com managed to survive despite Alibaba’s user base advantage, and JD.com become a new force on the battleground. In the first quarter of 2017, JD.com’s market capitalization reached $50 billion, approaching Baidu’s $60 billion. JD.com swapped shares with Tencent before it went public, after which Tencent acted multiple times to maintain its status as the second-largest shareholder of JD.com, which led to the identification of JD.com as a member of the Tencent faction.

Another squad of CEOs appearing at the banquet are from late-arriving tech giants collectively known as TMD — news aggregator Toutiao, online group-buying and restaurant-services operator Meituan-Dianping, and ride-hailing platform Didi Chuxing. These companies have risen to dominating roles in each of their fields in the past few years through mergers and squeezing out competitors. By the end of 2017, the three companies are valued at $20 billion, $30 billion and $56 billion respectively, entering the list of top unlisted companies in China.

Although both Meituan and Didi have Tencent as a major stakeholder, the two companies have been quietly expanding into each other’s turfs. In February, Meituan started a pilot program ride-hailing service in Nanjing, Jiangsu province. On the other hand, Didi has been developing take-out food delivery business and plans to debut in the first quarter of 2018.

In 2016, Didi acquired Uber China, monopolizing ride-hailing business in China. Ctrip continued to lead the online travel service. In 2017, Nasdaq-listed Ctrip has a market value of about $23 billion.

Meituan has also been engaged in head-to-head battles with Ctrip in travel and hotel booking services in 2017. At the same time, Meituan is also competing with Ele.me and Koubei in restaurant and take-out services. Didi is also expanding outside the country, trying to invest in the multinational Uber company with the help of investor Softbank.

Toutiao is seen as the equivalent of Baidu among the newer batch of internet giants, as it has been making a fortune out of so-called in-feed advertisement services. The business model, which involves embedding ads in newsfeeds or social media streams, has proved extremely successful. Toutiao is expected to garner up to 15 billion yuan ($2.3 billion) of revenue by the end of this year. It is threatening the business of search engine giant Baidu; news portals Tencent.com, 163.com and sina.com.cn; as well as social media platforms Weibo.com and WeChat. As a result, the entire industry has been trying to copy Toutiao’s success.

Although reports said in 2016 that Tencent and Baidu were trying to acquire Toutiao, as the year 2017 comes to an end, and Toutiao’s business also grows into video and livestreaming, it has become increasingly unlikely that an internet giant will swallow the younger giant.

While the internet giants fought closer-up battles this year, unicorns have been emerging in other areas. The hottest areas are bike-sharing, new retail and AI.

Dozens of startups joined the battle in the smartphone-based bike business that enables people to scan a code and unlock a rental bicycle. Hundreds of funds and venture capitalists have been attracted to the businesses. At one time, the streets of China’s major cities were full of variously colored bikes for rent. But in less than a year, most of the smaller startups have been bowing out of the market and almost forgotten. Big players have Beijing Mobike Technology Co. Ltd. and Ofo Inc., managed to survive, but because of complicated stakeholder relations, ending their war via a merger is still unlikely.

In the field of new retail, Fresh Hema, an offline fresh-food retail store incubated by Alibaba, has become a star of the industry. In the face of competition from online retailers, offline retailer has been trying to transform but achieved little. Unmanned convenience stores and unmanned retail shelves appeared in the middle of 2017. Despite user needs and experience are still clear; these inventions were already adopted by startups.

AI is also becoming a market star after AlphaGo made its name. In the voice command field, ever since Amazon rolled out the Echo, Chinese internet and smart-device-makers began to make their own smart-speaker devices, the prices of which fell to as low as 99 yuan. In the graphics field, the so-called “four beasts of CV” (computer vision), the four unicorns in the industry — SenseTime, Megvii Inc., Edraw and Cloudwalk — quickly established themselves thanks to the unique security and surveillance needs in China.

The biggest drama in the tech industry in 2017 was LeEco’s fall from glory. Once a market darling whose businesses spanned across smartphones, video streaming, TV sets, sports and movies, LeEco’s listed subsidiary Leshi Internet Information & Technology Corp. saw its market capitalization peak at 160 billion yuan in 2015. Founder Jia Yueting said that the company planned to build smart cars that could challenge Tesla.

His empire collapsed on 2017 as the company suffered a capital crunch and triggered a chain reaction of debt crises. Leshi has been taken over by property developer Sunuc China. Jia ran away to the U.S. to pursue his increasingly intangible car-making dream and refused to come back despite Chinese authorities’ calls for him to return to China and meet his financial obligations.

In retrospect, the main theme of China’s new economy is still played by the top players, while some companies have become new stars of their respective industries. In the meantime, smaller players have been left behind or kicked out of the race in quick fashion. A few heavyweights, which at times have appeared invincible and growing nonstop, collapsed and winked out like a shooting star.

After all, that is the rule of the jungle. The fierce market competition did create tougher players that are ready to face rivals on the global stage. But besides that, any anxiety about China’s innovation capabilities has gradually faded. After all, it is said that China has one-third of the world’s AI talent.