By Wang Liwei and Zhang Qizhi 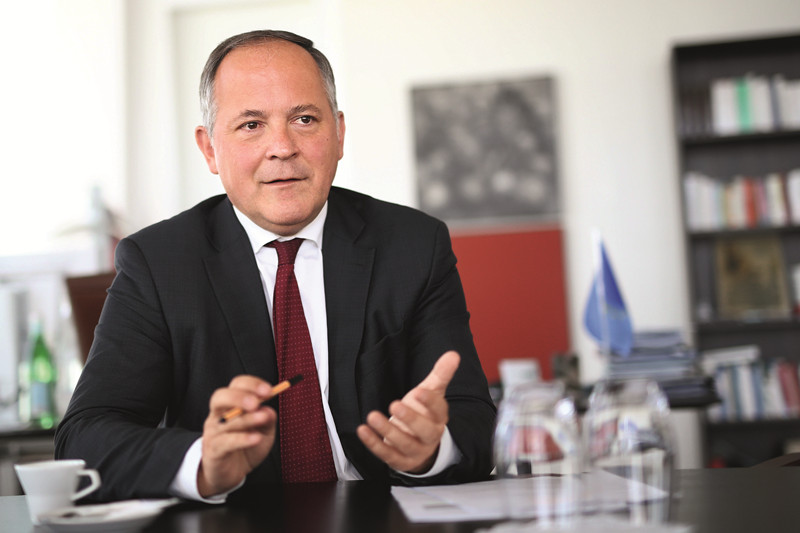 European Central Bank Executive Board member Benoit Coeure said the spike in bitcoin is "clearly a bubble," warning that despite its sharp rise in value, it is "a speculative investment" with "a risk of large capital losses." Photo: Visual China

Benoit Coeure, a member of the European Central Bank (ECB) Executive Board, and in charge of market operations, market infrastructure and payments, and international and European relations, sat down for an interview with Caixin on Dec. 17. He shared his opinions on a wide range of issues, including outlook for the international role of China’s currency; the European economy’s recovery; and the bitcoin bubble.

Below are excerpts from the dialogue:

Caixin: The ECB in June invested a small amount of foreign reserves in the renminbi (RMB). Why? Any plans ahead?

Coeure: The amount is equivalent to 500 million euros ($602 million), roughly 1% of the ECB’s foreign currency reserves. We sold U.S. dollar reserves to do this. At the end of 2016, the ECB’s reserves consisted of 83% U.S. dollars and 17% Japanese yen. We also have a 45 billion euros / 350 billion yuan bilateral currency swap agreement with the PBOC (People’s Bank of China).

Both initiatives are an acknowledgment of the growing international role of the renminbi and a first step toward a better understanding of how the Chinese monetary and foreign exchange markets work.

I’m quite sure that there will be further steps in the future. But central banks are conservative by nature. This is a long-term process.

How do you see the prospect of RMB internationalization?

To understand the international monetary system, one needs to take a very long-term perspective, even if the rise of China on the global economic stage has been much faster than anything we’ve seen before.

It’s quite evident to me that the renminbi will eventually become a major international currency, and I personally believe that a multipolar monetary system is good for the stability of the global economy. For the renminbi to achieve that status, further steps will need to be taken, including a further opening of the capital account, the pace and modalities of which are for the Chinese authorities to decide.

How does the global central banking community view the PBOC’s role in recent years?

Over the last 10 years or so, there has been a clear evolution. The PBOC has been engaging more and more with the international community and its central bank counterparts in line with the changing role of China in the global economy.

From an ECB perspective, I can say that we now have a relationship with the PBOC that is as broad and deep as it is with a core group of other central banks. This includes discussions on financial markets, monetary policy and payment systems, to name just a few. The PBOC is part of that core group.

How is Europe’s recovery progressing?

We don’t see it as a recovery anymore, but as an expansion. The annual growth rate in the eurozone is the strongest in 10 years. We expect a GDP (gross domestic product) growth rate of 2.4% for 2017, and business and consumer confidence are at their highest levels in over 17 years, according to the November reading of the European Commission’s Economic Sentiment Indicator. Seven million jobs have been created in the eurozone since mid-2013.

Growth today is not only very strong, but also very broad-based. The expansion is also more sustainable as it is driven by domestic demand and an improving labor market, and it is less reliant on credit.

We have definitely left the crisis behind us. Europe is back!

What are the risks to Europe’s economy?

At a deeper level, we see risks to global growth resulting from the erosion of support for international trade and openness. Europe clearly remains committed to openness and international cooperation. We are open for business. We don’t agree with those countries that want to curb international trade.

And let me add a more-political remark. In a world which is more uncertain and volatile than ever, Europe can project itself on the world stage and work jointly with China to provide stability.

While Europe needs to rebuild fiscal buffers now, as ECB President Mario Draghi recently mentioned, the United States is embarking on a major tax reform involving major tax cuts. How do Europeans see tasks on the fiscal side?

In Europe, there are two different discussions. One is on the level of the deficit, or “fiscal stance,” the other on the composition, i.e. the quality of public finances.

In all countries, there is scope to make public finances friendlier to growth, in particular to reduce nonproductive public spending and cut distortionary taxes.

But not many countries have fiscal space because their public debt is too high. Their priority should be to use the current economic expansion to rebuild fiscal buffers so that when the next crisis hits, they can use fiscal policy to react to it. In the meantime, they can still improve the composition of their public finances.

So Europeans need to carry out their own fiscal agendas, and not follow the U.S.?

It’s not for the ECB to comment, but I don't see a great appetite among European leaders to follow the U.S. example at the current juncture.

What do you think of bitcoin?

What we are witnessing today is clearly a bubble, made possible by scarcity and by an expected sequence of gains that investors believe will be sustained irrespective of the fundamentals. That is the definition of a bubble.

Bitcoin is not a currency. Investors should not believe that they will be able to use it as a means of payment. It is a speculative investment. There is a risk of large capital losses that investors should be aware of.

So the main concern related to bitcoin is not a monetary one but one that relates to investor protection, and possibly also to tax evasion, money-laundering and criminal finance.

With two American exchanges (the Chicago Board Options Exchange and the Chicago Mercantile Exchange) introducing bitcoin futures, how do you see the policy for it going forward?

The ECB is not a securities regulator. Regulators worldwide have recently warned investors repeatedly about possible losses. In Europe, the Fourth Anti-Money Laundering Directive, adopted by the European Council and the European Parliament last Friday (Dec. 15), requires exchange platforms and wallet providers to report suspicious transactions and identify owners of digital currencies. I’m quite sure that further steps will be taken to regulate this market.