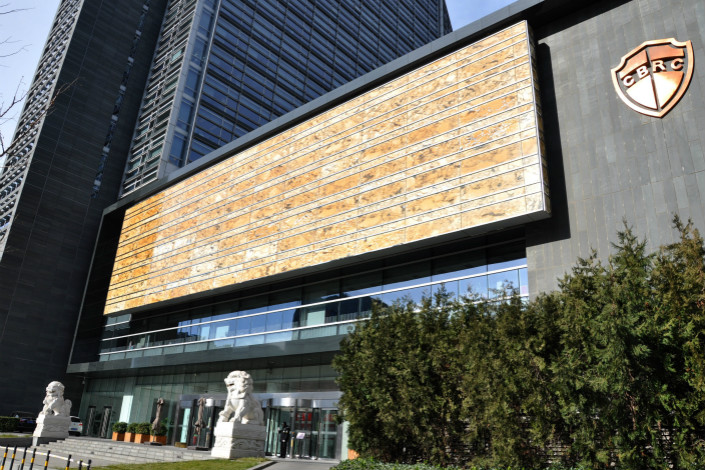 By the end of 2016, entrusted loans had grown to 13.2 trillion yuan ($2.03 trillion), accounting for 8.5% of outstanding total social financing, the country’s broadest measure of credit. By the end of November 2017, that proportion had dropped slipped to 8%. Photo: IC

China’s banking watchdog has taken another step in its campaign to curb financial risks, introducing tighter scrutiny of lenders’ activities in one of the main segments of the country’s shadow-banking industry – entrusted loans.

The China Banking Regulatory Commission (CBRC) announced a set of sweeping new rules to control such lending in a statement dated Jan. 5. It said that a lack of unified regulations on entrusted loans had created “certain hidden risks” and that the time was ripe to strengthen risk control and guide credit to better serve the real economy.

The regulations, which were first drafted back in 2015, are being rolled out amid a broader effort by the government to crack down on activities by financial institutions that could destabilize the financial system. In November, the People’s Bank of China (PBOC) and the banking, securities and insurance watchdogs released proposals to tame country’s $15 trillion asset management industry and untangle the complex web of investments that exist outside the formal banking system.

In an entrusted loan, a bank acts only as an intermediary to arrange and administer the financing between the borrower, usually a company, and lender, normally a financial institution, and in theory does not bear any of the risk, though in reality that has often not been the case.

The new rules stipulate that when arranging entrusted loans, banks are only allowed to act as intermediaries and are banned from providing guarantees or from becoming involved in making decisions about how the loans can be used.

The regulations ban the use of money raised through entrusted loans for investment in financial products such as bonds and stocks, and stipulate the funds should be used in accordance with the country’s industrial policies. The regulations also impose tighter requirements on banks regarding information disclosure and risk management of entrusted loans.

The commission will also tighten scrutiny of the sources of funding for entrusted loans, making sure that money can be traced back to its source and does not come from capital borrowed from other institutions.

The PBOC first permitted entrusted loans in 2011 as a way of reducing lending risks for banks and boosting their fee income while helping companies obtain loans. But the funds raised soon started to be used for investment in asset management products, and many deals were structured to hide the fact that the banks retained the risks even though they weren’t making adequate provision in case the loans turned bad.

By the end of 2016, entrusted loans had grown to 13.2 trillion yuan ($2.03 trillion), accounting for 8.5% of outstanding total social financing, the country’s broadest measure of credit that includes bank loans, corporate bond and equity issuance and bank acceptance bills. By the end of November 2017, that proportion had dropped slightly to 8%, PBOC data show.

The financial authorities became increasingly concerned that banks were using entrusted loans to shift debt off their balance sheets and to circumvent curbs on lending to industries such as real estate and to local government financing vehicles.

Regulators also worried that the proceeds of many of the loans were being used by institutions to leverage up and invest in financial products such as bonds, derivatives, asset management products or equities, contributing to the growth of asset bubbles.

The CBRC also on Friday rolled out a regulation limiting the number of commercial banks that one investor can take a stake in, aiming to tackle the problem of major shareholders with multiple stakes in commercial lenders abusing their power.

This story has been updated to remove an incorrect statement on prohibitions banks have about using their own money for entrusted loans.