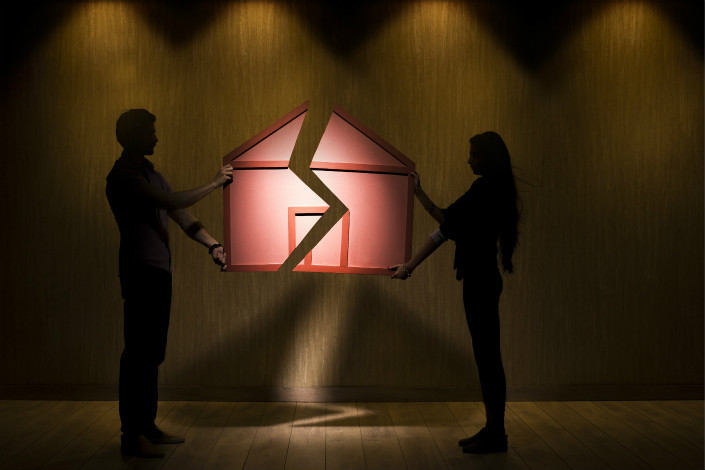 China’s highest court has issued a new interpretation of the country’s marriage law to protect a spouse from hidden debt accumulated by a partner. Under the new interpretation, husbands or wives must repay loans only if they signed paperwork or gave formal consent. Photo: Visual China

China’s top court has released a new interpretation to the country’s Marriage Law to prevent a spouse from being forced to pay any hidden debts of their husband or wife.

Lawmakers redefined the concept of marital joint liability amid growing public anger surrounding gaps in a previous interpretation in 2004, which forced a spouse to prove that the family didn’t benefit from the borrowed money, putting them in hot water. In some previous cases, a married partner was held accountable for debt incurred through illicit activities like gambling, or were told to repay money borrowed and used during a previous marriage.

In the revised interpretation (link in Chinese) issued on Jan. 17, the supreme court said debts will be considered shared liabilities only if both partners sign the original paperwork, or if there is proof that a nonsignatory has later approved the borrowing.

This condition doesn’t apply to money borrowed for family expenses, such as paying rent, buying a home, a joint holiday or children’s tuition. “An individual is not liable to repay a debt his or her spouse has accrued when the amount far exceeds what the couple needs for their family expenses and/or joint business operations,” the top court said.

But, if a creditor can prove the loan benefited the family, the borrower’s spouse can be held accountable “regardless of the amount,” it added.

The court is still vague on what a “joint business operation” means. According to Li Mingshun, deputy head of the Chinese Marriage Law and Family Research Association, this interpretation is only applicable to revenue from farming contracted rural land and business operations by a sole proprietor, he said.

Under the earlier regulation, the burden of proof to show that the family benefited from a loan fell on the spouse. But the new interpretation, which takes effect on Jan. 18, shifts some of the burden of proof onto creditors, which means they need to be more vigilant when lending.

But, it is hard for creditors to track how the money will be spent, said You Le, a lawyer with King & Capital Law Firm in Beijing.

The 2004 interpretation was designed to clamp down on debt fraudsters who used sham divorces to dodge liabilities. But it has been dogged by controversy as it put spouses in an awkward position while trying to gather evidence on how their partners have spent borrowed money. In some cases this has unearthed extramarital affairs and children born out of wedlock. The situation has also led to abuses of the law by irresponsible spouses or estranged spouses who have used the provision to take revenge on their partners.

In 2016 alone, Chinese media reported at least 10 cases of people being dragged into lawsuits in which they were told to cough up millions of yuan to pay the interest and principal of loans borrowed by spouses without their knowledge or during a previous marriage.

In one recent case, a Beijing court ordered the widow of Chinese media tycoon Li Ming to pay 200 million yuan ($31.12 million) to an investor who lent 450 million yuan to her late husband’s company, Beijing Galloping Horse Film & TV Productions. The ruling created an online uproar because the woman, Jin Yan, was not involved in the company at the time the money was borrowed, nor had her family used any of the money.

Galloping Horse hit international headlines in 2012, when it became the first Chinese company to invest in Hollywood by acquiring Digital Domain, a bankrupt visual and special effects company founded by director James Cameron.

The company is also known for signing on some of the industry’s big names including “Face Off” director John Woo as well as producing some of China’s popular films and TV series.

In 2011, the company was estimated to be worth 3 billion yuan, making it the most valuable film and TV studio in China. That’s when it raised 750 million yuan to fund an expansion, including 450 million yuan from Tianjin-based CCB Culture Fund. The latter investment was based on the condition that Galloping Horse would go public before the end of 2013.

Under the agreement known as a valuation adjustment mechanism (VAM), sometime called a “bet-on agreement,” CCB Culture Fund was entitled to a refund plus an interest payment and a mark-up, totaling 635 million yuan, if Galloping Horse failed to go public by its promised deadline.

When plans for an initial public offering derailed, it led to finger-pointing over the failure. Since the unexpected death of Li Ming from a heart attack in January 2014, both companies have been embroiled in a legal battle over the payout.

Li’s wife, Jin Yan, was hastily brought on board as Galloping Horse’s new president in a bid to hold the company together shortly after her husband’s death. It was then that she learned about the VAM agreement for the first time. But, she didn’t realize more troubles were ahead for her.

“The only thing I could remember was that Li Ming woke up one morning in 2011 boasting in front of me that he just signed a deal, saying specifically it wasn’t a VAM deal,” she said. “He said Galloping Horse has become China’s most valuable film and TV firm.”

Jin was ousted in October 2014, due to a lingering feud with her two sisters-in-law, who ran the company with Jin’s late husband for years.

In February 2016, the China International Economic and Trade Arbitration Commission ruled against Jin, demanding nearly 200 million yuan from her to settle her husband’s portion of debt, which he owed to CCB Culture Fund.

CCB Culture Fund followed up with a lawsuit at Beijing No.1 Intermediate People’s Court, which had upheld an arbitration ruling in September, saying she had to honor the debt obligation as Li’s wife in accordance with the 2004 Marriage Law interpretation.

Under the 2004 interpretation, a spouse is only let off the hook if a couple has a written agreement that exempts one party from shouldering the debts of the other or prohibiting access to one’s assets or earnings prior to marriage or only owned by one spouse.

Jin Yan argued her family hadn’t benefited from the 450 million yuan raised by Galloping Horse, and hence she wasn’t liable for it. But the Beijing court insisted business operations — even those in which only one party is involved — are part of a couple’s shared life. It said the funds raised would have brought in more revenue for the company, which would have eventually benefited Jin Yan. Such broad interpretations in the past have served as a catch-all that traps spouses into paying debts that they didn’t even know existed.

The lower court in the Chinese capital was wrong to interpret fundraising activity at Galloping Horse as part of Li’s family business operations, said marriage law researcher Li Mingshun. “The court can’t simply hold someone liable for money his or her spouse has borrowed just because this person can’t prove how the money was spent,” Li Mingshun said.

The lower court in Beijing should have asked the creditor to provide evidence to prove that Jin benefited from the money that was lent to her late husband.

The new interpretation goes a step further in clarifying the conditions for joint marital liability. Meanwhile, Jin has filed an appeal at Beijing People’s High Court.

The new interpretation is clearer and balanced in defining spousal liability in debt disputes, said Li Hongxiang, a law professor at Jilin University in northeastern China.

“As for creditors, they should be more vigilant when lending and request signatures from both spouses to prove they both agree to take the loan and that such loans are intended for family use,” he said.