By Fang Yuan and Li Rongde 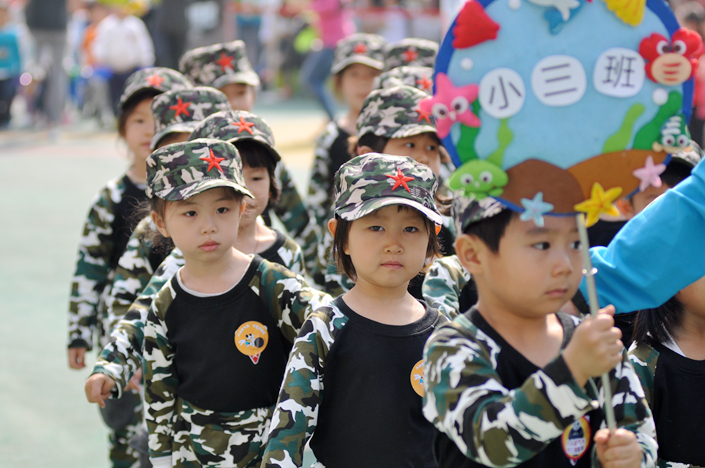 Kindergarteners in eastern Beijing walk in a parade for their school’s sports meet in April 2016. Experts warn that a nationwide rush to build new preschools and kindergartens may have been premature. Photo: Wu Gang/Caixin

Experts warn that a China-wide rush to build new preschools and kindergartens ahead of an anticipated baby boom may lead to an oversupply of classrooms.

That's because the 2016 scrapping of China's one-child policy may have failed to trigger a widely expected wave of childbirths and higher demand for early education.

Indeed, experts are now calling on the government to do more research into China's demographic conditions before pouring additional funds into classroom building projects.

The Beijing municipal government has already pledged to give any school operator or investor 10,000 yuan ($1,500) for every classroom seat created in a kindergarten, according to a city government document on school subsidies released in January.

Southern Guangdong province, long a magnet for migrant workers, in recent weeks started converting city middle schools and high schools into kindergartens for future use. Students who were attending classes in these schools have been transferred to other facilities.

The push to increase preschool slots began after the central government decided in October 2015 to ease the decades-old family planning policy, which limited most couples to one child. The new, two-child policy took effect in January 2016.

Policymakers predicted the move could lead to a baby boom and drive up demand for early education services.

A study completed last year in connection with a national plan for educational development for the period 2016-2020 projected the number of preschool-aged students would grow to more than 59 million by 2022 from about 48 million in 2016. The demographic change would require adding 75,000 new kindergartens to the existing pool of 223,700 facilities by the end of 2015.

The number of preschool-aged students in Beijing was expected to swell to 603,400 by 2021, far beyond the 417,000 students enrolled in 2016, according to a study financed by a Ministry of Education affiliate.

But childbirth data released Thursday by the government's National Bureau of Statistics (NBS) cast a shadow of doubt over earlier projections: NBS said childbirths nationwide declined to 17.3 million in 2017, down 680,000 from 2016 and far below an estimate of up to 21.95 million childbirths for 2017 issued by the National Health and Family Planning Commission shortly after the two-child policy was introduced.

China could in fact experience a “precipitous fall” in childbirths as women in their child-bearing years have recently appeared reluctant to bear more than one offspring due to rising housing and schooling costs, according to a recent report by Liang Jianzhang, a professor at Peking University's Guanghua School of Management, and Huang Wenzheng, a demographer at Johns Hopkins University.

Liang and Huang further expect the number of childbirths to decline sharply this year and by between 300,000 and 800,000 annually over the next decade.

Although the new family planning policy could challenge public resource allocations, more studies will be needed to assess its full impact, according to Professor Lu Ping at Zhejiang University’s Research Center for Public Policy for Children.

“Given the rising number of migrants amid rapid urbanization, policymakers could be blindsided if they continue to use data collected via the household registration system, which excludes migrants, to allocate school resources,” Lu said.

Many kindergartens that have not been counted by government statisticians have been deemed “illicit” not because of poor construction or substandard teaching but because their builders violated zoning rules, according to Song Yingquan, an associate professor at Peking University’s China Institute for Educational Finance Research.

An easing of zoning rules "could help ease the supply crunch and save public resources,” he said.