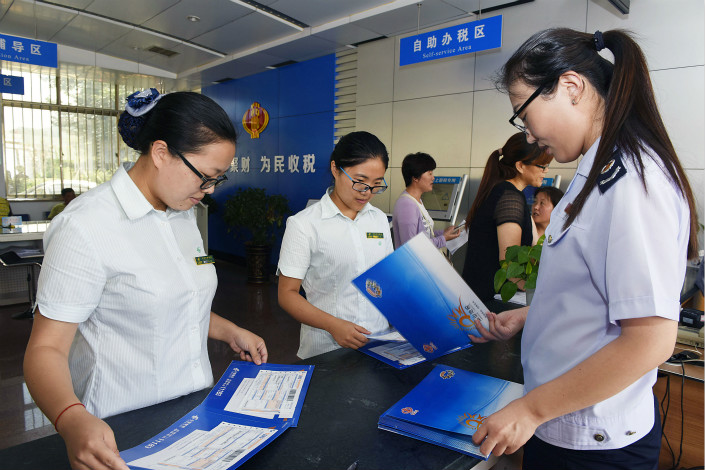 Nearly a dozen employees of a Beijing tax office were found guilty of helping homebuyers evade taxes, costing the government more than 100 million yuan ($15.6 million) in revenue, according to the city’s graft-busting agency.

An investigation into the tax office found that from 2011 to 2015 a group of employees took bribes worth 15 million yuan in exchange for waiving or reducing transaction taxes for buyers of existing homes, the Beijing Commission for Discipline Inspection (BCDI) said in a statement earlier this month.

Corruption related to real estate transaction taxes has been rampant over the past few years, the BCDI said in a statement in July. At the time, the commission instructed employees of the tax office in Beijing’s southern Daxing district to impose levies according to the rules.

Prosecutors indicted 26 people in the case, 11 of whom were convicted for taking or offering bribes or abusing their positions to personally profit, prosecutors said. The BCDI said the case was extremely unusual in terms of its scope and involved systematic corruption that did tremendous damage to society.

The employees helped people avoid sales taxes and personal income taxes imposed on existing homebuyers by tampering with tax declaration documents, the BCDI said. For instance, they often disguised what was a normal home sale as a property transfer between family members, which is subject to a smaller fee.

Among those involved in the case was Jing Daobin, a former tax official who fled to the United Arab Emirates in September 2016. The investigation found that Jing had forgone land and sales levies at the request of a real estate agent, causing the government to lose more than 1 million yuan in tax revenue. Three months after Jing fled, investigators enlisted his wife to persuade him to return to the country and cooperate with the investigation.

Two other tax office employees, Zhang Ying and Liu Xinran, both in their 20s, received a prison sentence of six years and one year, respectively, for corruption involving around 1 million yuan.