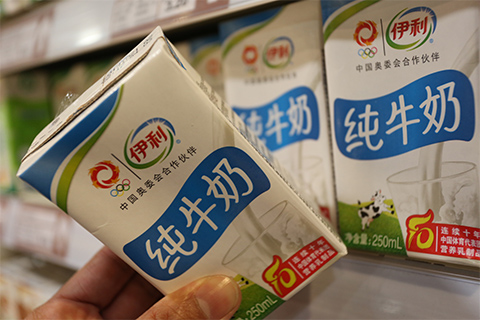 (Davos, Switzerland) – Leading Chinese dairy Yili is building a global network to boost its product quality, with an aim of moving beyond its domestic market to sell to 2 billion consumers at home and abroad within the next three years, its chief executive told Caixin.

The company and its domestic peers still suffer from an image crisis in their home China market, following a scandal a decade ago that saw hundreds of babies sickened by infant formula tainted with the industrial chemical melamine. Since then, Inner Mongolia Yili Industrial Group Co. and peers like Mengniu have been trying to regain the trust of Chinese consumers in one of the world’s largest dairy markets.

Following more than a decade of breakneck expansion, China’s economy is heading into a new slower growth phase where quality will become increasingly important for the country’s traditionally cost-conscious consumers, CEO Zhang Jianqiu told Caixin in written answers to questions during his trip to Davos, Switzerland, where he took part in a China consumer panel at this year’s World Economic Forum.

He noted that Chinese consumers have developed a penchant for buying certain products abroad. Infant formula falls into that category following the earlier crisis, with new parents distrustful of domestic brands often bringing back big stocks of foreign products from their overseas trips.

“As to Chinese consumers traveling all over the world and buying record amounts of goods, this is evidence that the era of quality consumption is at hand,” he said. “How will businesses respond?”

Yili is China’s biggest dairy. The company had 22% of the market in 2017, slightly ahead of No. 2 producer China Mengniu Dairy Co. Ltd., according to Euromonitor International. Among foreign brands, only Taiwan’s Want Want and Switzerland’s Nestle made it into the top 10 last year, finishing at sixth and seventh, respectively.

But the picture changes dramatically in the infant formula category, with only one Chinese company, Feihe, in the top six, reflecting lingering consumer distrust after the melamine scandal. Yili comes in seventh in that category, with sales just a third of those of industry leader Nestle, according to Euromonitor.

In a bid to improve its products and expand globally, Yili has set up a worldwide research network that includes presences in Australia, Europe and North America. The company also made headlines last year when it made a bid for a controlling stake of financially troubled Australian dairy giant Murray Goulburn, even though that bid eventually failed. Other Chinese dairies have also experimented with global purchases, with Bright Food, China’s third largest dairy, buying 78% of Israel’s Tnuva in 2014 in a deal that valued the company at $2.5 billion.

“I think that in the future, Chinese product quality will receive recognition from more and more countries around the world,” Zhang said. “We have a small goal, which is to allow 2 billion consumers around the world enjoy our products by 2020.”


This story has been updated to clarify that Yili had 22% of China’s dairy market in 2017. A previous version had misstated the number as a sales figure.