Reporter’s Notebook: One of These Things Is Not Like the Others, but Who Cares? 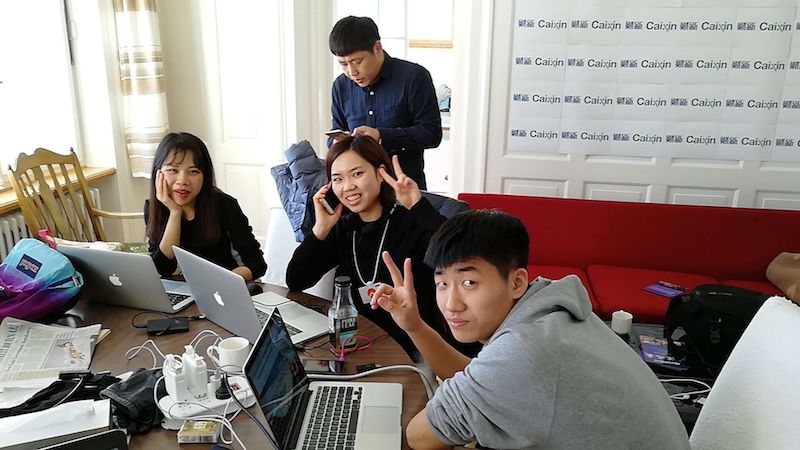 Caixin reporters working in our Davos, Switzerland, hotel room to bring the World Economic Forum to China and the world.

As my first trip to the World Economic Forum winds down, I thought I would close out this series of reporter’s notebooks with a bit of my own experience as the lone foreigner traveling with an all-Chinese contingent from my current employer, Caixin. My own foreignness in the group didn’t even really occur to me until a low-key but eye-opening experience at the lobby of the hotel where we were staying.

In a scene that harkens back to my college days in the 1980s, Caixin chose a dormitory-like situation for the dozen of us that traveled to Davos, Switzerland, renting out a large space called “the apartment” at one of the town’s major hotels. That meant we got a single key for the apartment, which consisted of four or five rooms containing two to four beds each. Completing the dorm-like situation was the availability of just a single shower and toilet for the entire group, which ended up creating far fewer problems than I initially thought.

We left our single key in the room as long as it was occupied, and returned it to the front desk when everyone was out. I returned to the hotel one afternoon and discovered the door locked, so I went to retrieve it from the front desk. That was when I got my eye-opener, as the reception woman gave me a sideways, slightly suspicious look. It took a second to realize she was wondering why a pale-face like me was asking for a room that had become a sort of “China-central” during Davos week.

I blushed just a little and explained that I was the lone foreigner in the group, and after a slight hesitation she retrieved the key and passed it over to me.

So what was it like being the lone foreigner in this kind of global Chinese delegation? Such a reality would have been nearly impossible even a decade ago, since most such international contingents back then were still from big state-owned companies that rarely employ foreigners. Caixin is one of a new generation of private companies that are quickly growing, often fueled by private equity, and can afford and embrace this kind of global travel. Such companies aren’t afraid to hire foreigners when needed, and pretty much treat us just like everyone else in the organization, for better or worse.

Apart from the constant cooking of instant noodles around in the background as my Caixin colleagues and I worked around a big wooden table, the other big thing I noticed in my environs was my age. At a mature 53, I was easily the oldest person in our contingent. The two next oldest just scraped their way into being children of the ‘70s, having been born in 1979, making them a sprightly 38. After that it was mostly 20-somethings and perhaps a few early 30s sprinkled in.

If I had been with any international media, the median age probably would have been somewhere in the 40s, or perhaps even the 50s, since such outlets typically send their more seasoned and veteran reporters and producers to such events. But China has no such people, since anyone older than 40 or 45 would have grown up in an era of mostly big state-run entities, including news outlets that worried more about spreading the Communist Party line than providing real and objective news.

That youth-skewing theme gets repeated throughout today’s China, especially in the young private sector, where average ages are often in the 20s and the oldest person in the group can be just around 40. Foreigners are an exception, as our ages can go much higher.

At the end of the day, I was impressed by the broadly equal treatment everyone received within such a diverse group. No one yielded the bathroom due to age or seniority, and everyone was quite accommodating while pursuing their own individual tasks. The result was an overarching camaraderie that made the entire experience quite pleasant. I don’t know if I’ll come back next year, as I’d like to give the opportunity to one of the younger reporters who would undoubtedly delight in the prospect. But I’ll certainly remember the experience fondly, in no small part because of the group I got to share it with.