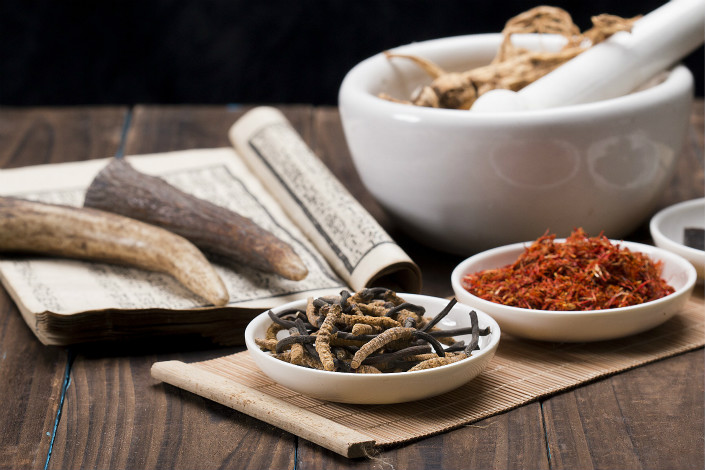 Traditional Chinese medicine (TCM) practitioners usually prescribe customized herbal formulas that vary in both amount and combination of herbs. In recent years, TCM drugmakers have largely standardized some of the most popular formulas, and tried to export them to the most-recognized U.S. and European markets. Photo: VCG

A stream of chocolate-colored pellets rolls down a thin metal tube and into a machine where they are delicately deposited into bottles shaped like tiny jade vases.

The automated production line of Tasly Pharmaceutical Group in this northern Chinese port city exemplifies the recent progress that has been made in the manufacture and delivery of traditional Chinese medicine (TCM). It wasn’t that long ago that TCM was still being administered in much the same way it had been for thousands of years — a bitter draft of mixed herbs, often collected in the wild, that had been crushed, boiled and reduced in a clay pot.

Tasly’s 40,000-square-meter Tianjin complex represents a step forward in a national campaign to modernize the TCM industry that began more than two decades ago. The goal is to export China’s best TCM products to major pharmaceutical markets around the world.

However, TCM remains unproven in the eyes of the drug regulators in many countries, particularly the United States. “For most conditions, there is not enough rigorous scientific evidence to know whether TCM methods work for the conditions for which they are used,” according to the U.S. National Center for Complementary and Integrative Health, the agency for research about “products that are not generally considered part of conventional medicine.”

Winning approval from the U.S. Food and Drug Administration (FDA), considered to have the world’s toughest drug approval regime, would go a long way toward bolstering TCM’s reputation.

Consequently, a handful of TCM makers like Tasly are putting products through FDA clinical trials. In August, the company reached a milestone in this endeavor when it became the first Chinese TCM company to announce the results of the third phase of clinical trials.

Although China started its TCM export campaign in the 1990s, no TCM product has ever won FDA approval to be marketed as a drug in the U.S. Although the industry has encountered serious questions about quality and standardization, some of its products have made inroads in other counties. Still, U.S. FDA approval remains the holy grail for TCM makers because it would serve as an endorsement by the Western medical establishment and crack open lucrative pharmaceutical markets — not only in the U.S., but elsewhere around the world.

“Due to FDA’s authoritativeness in many countries, obtaining its approval will subsequently increase its chances of accessing the entire foreign market,” a Tasly representative told Caixin.

When China began its national campaign to modernize the TCM industry, the government set an initial goal to launch two to three products in the mainstream Western market by 2000. Later, it postponed its target date to 2010. The goal has since disappeared from official documents.

“China lives up to the reputation as a ‘large’ drugmaker, but it greatly lags behind other ‘strong’ drug-making countries in terms of scientific research capabilities,” a Tasly representative told Caixin.

In 1997, Tasly became the first TCM developer to file for a new drug investigation with the U.S. FDA when it submitted its Compound Danshen Dripping Pills, its bestselling TCM treatment for coronary heart disease, for approval.

To get greenlighted by the FDA, a drug has to go through three phases of testing for safety and efficacy, after which the authority will review all the trial data and investigate whether the drug is suitable for the U.S. market. The entire process usually takes eight to 10 years and costs at least $100 million, said Ming Wang, an ophthalmologist who worked for the FDA for five years.

Despite the costs, FDA approval translates into a cash infusion. Since 2004, when the FDA released its Guidance for Industry: Botanical Drug Products, the regulator has approved only two herbal medicines. One was Veregen, developed by German firm Medigene AG, an ointment for warts made from green tea extract. The other was Fulyzaq, a tablet containing the sap of a South American tree. It is used to treat diarrhea suffered by people living with HIV.

The FDA’s endorsement turned out to be a windfall for Medigene. After earning FDA approval in 2006, Veregen was recognized by several European countries over the next few years. The drug went from an obscure product that made up “a small proportion” of Medigene’s income in 2009 to accounting for about one-third of its revenue in 2016, according to the company’s financial statements.

Even if Tasly makes it through the final phase of FDA clinical trials, there’s still only a small chance it will launch its drug in the U.S. According to Michael Yao, a senior clinical review officer with the FDA, for every 10 drugs that pass the third phase of clinical trials, only one ends up making it to market.

TCM dates back to ancient China. Its practice, which includes herbal medicine, acupuncture, massage and other remedies, is based on the belief that there is vital energy circulating through the body that connects the organs.

When it comes to drugs, TCM practitioners usually prescribe customized herbal formulas that vary in both amount and combination of herbs from one patient to another. The lack of standardization has been an obstacle to modernizing TCM. In recent years, however, TCM drugmakers have largely standardized some of the most popular formulas, turning them into pills, capsules and injections.

However, there is a “fundamental difference” between herbal medicine, which in TCM are complex mixtures of organic chemicals, and conventional Western medicine, which consists of “isolated pure chemicals synthesized in a laboratory,” said Bahia Al-Salihi, an American chiropractic physician and licensed acupuncturist who has been practicing TCM for 25 years.

The inherent complexity of TCM has led to quality problems. Because chemical compounds in plants are diverse, the same herb can contain some elements that are beneficial as well as some that are toxic. A recent study found that aristolochic acid, commonly found in birthwort — an herb whose species are used in TCM to treat rheumatism and relieve pain — is linked to liver cancer. The substance has already been known to cause kidney failure, and China’s drug regulator vowed to take action.

And then there’s the problem of TCM products containing substances they are not supposed to. “There have been reports of Chinese herbal products being contaminated with drugs, toxins, or heavy metals or not containing the listed ingredients,” according to the U.S. National Center for Complementary and Integrative Health.

These issues have undermined TCM’s reputation, hurting its chances of winning mainstream acceptance outside of China. “I don't anticipate that herbal medicine will be accepted easily or widely by Western physicians and the American population,” Al-Salihi said.

Consequently, in most markets outside China, TCM can only be sold as an herbal supplement, rather than a full-fledged pharmaceutical. On the plus side, that designation means TCM is subject to less stringent regulations in the U.S.’s herbal dietary supplement market, which, according to the American Botanical Council, was worth $7.5 billion in 2016. However, it also means that it can’t be sold as a drug, and therefore can’t access the country’s far larger pharmaceutical market. In the U.S., consumers spent $450 billion on prescription medicine in 2016, according to the IQVIA Institute for Human Data Science.

Unlike standardized Western pharmaceuticals, TCM’s effects are harder to predict, so it’s much more difficult for Chinese companies to maintain quality control, said Shan Xiaopeng, who studied TCM in college and has worked in China’s pharmaceutical industry for 17 years.

Tasly has put a lot of effort into improving quality control, Shan said.

Since 1998, a year after it submitted its FDA application, the company has sought to standardize every stage of TCM manufacturing from the farming of herbs to extracting the active compounds to marketing the final products.

Success outside the U.S.

Although Tasly has not received FDA approval, it has won the right to distribute several products as prescription drugs in other countries including Russia, Singapore, Vietnam and the Philippines.

Tasly marketed its first drug in a Western market in 2016, when it launched another drug for cardiovascular disease, the Danshen Capsule, in the Netherlands. The launch benefited from the European Union’s simplified application process for traditional herbal medicines with a long history of use.

In 2004, the EU amended its drug law so that clinical trials weren’t required for any traditional herbal medicine that has been used for at least 30 years preceding the date of application, including at least 15 years within the EU. To launch in an EU country, firms only need to file a new drug application with that country’s drug regulator. So far, at least three TCM drugs have made it to market in the EU under the rule — two in the Netherlands and one in UK. The approval process took around four years.

Even though approvals take far less time in the EU than the U.S., there is no difference is quality control, said Mei Wang, chairperson of the Leiden University European Center for Chinese Medicine and Natural Compounds. Wang collaborated with Chinese TCM developer Diao Group to launch the first TCM drug in the Netherlands in 2012.

Of the nearly 1,000 Dutch patients that have taken the medication, no adverse reaction has been reported, she said.