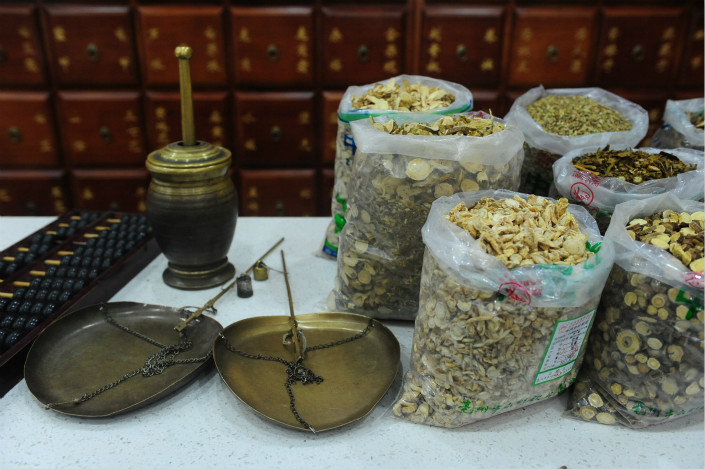 A recent article in the British medical journal Nature argued that “minimizing clinical-trial requirements could put more patients at risk.” However others have claimed that this new rule is similar to the EU's regulations on herbal medicines. Photo: Visual China

Some traditional Chinese medicines (TCM) will soon be allowed to launch in China without effectiveness trials, a reform the industry has sought for almost a decade despite raising concerns.

TCMs whose formulas are based on classic medical texts published through the Qing Dynasty (1644-1911), will be exempt from time-consuming effectiveness trials if manufacturers prepare ingredients by essentially the same method and claim the same curative effect as the books do, according to a policy published in October by the China Food and Drug Administration.

The rule repeated a 2008 document that was never implemented, partly because the list of acceptable classical medicines was never published. But the list has now been completed, and includes 100 drugs. It will be made public as early as this month, a TCM professional surnamed Ding told Caixin.

As the date of loosened oversight approaches, some people have expressed concerns about the quality of drugs that will become eligible for sale without effectiveness testing. A recent article in the British medical journal Nature argued that “minimizing clinical-trial requirements could put more patients at risk.”

And just because some drugs have been used for centuries doesn’t mean they are always safe, some say. An October study in the journal Science Translational Medicine found that aristolochic acid, a herbal substance found in dozens of TCMs and already known to cause kidney failure, was also linked to liver cancer.

But some experts said drug formulas dating back centuries should be reliable, and the reform, which only removes effectiveness trials but not safety checks, will help save time for TCM-makers looking to launch their products.

Pharmaceutical formulas and methods recorded in classical medical texts were very strict, said Shan Xiaopeng who studied TCM in college and has worked in China’s pharmaceutical industry for 17 years. He added that some techniques are no longer used by modern drugmakers, which means they won’t be exempt from effectiveness trials under the new policy.

The new rule is also in line with the European Union’s regulation on herbal medicine, Shan said. In 2004, the EU amended its drug law, stipulating that clinical trials weren’t required for any traditional herbal medicine that has been used for at least 30 years preceding the date of the application, including at least 15 years within the EU.

So far, at least three TCM drugs have been launched within the EU thanks to the simplified rule. But no products have been recognized by the U.S. system, considered the world’s toughest, requiring all medicines to go through safety and effectiveness tests.

“Both EU and U.S. ways of approving drugs have no difference in quality control,” said Mei Wang, chairperson of the Leiden University European Center for Chinese Medicine and Natural Compounds.