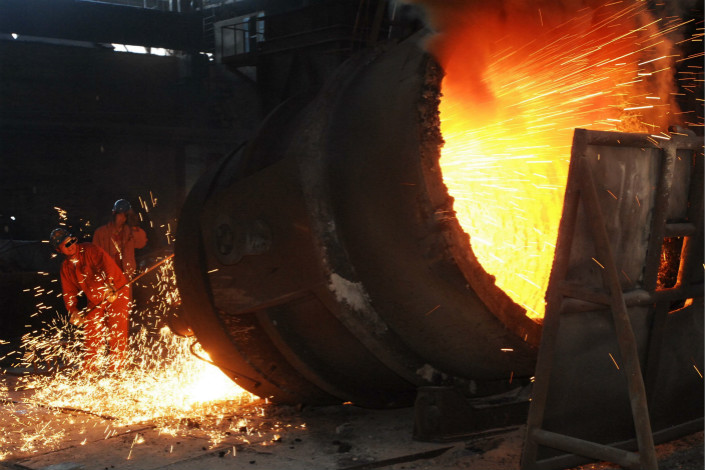 Fushun Special Steel production is seen at its Liaoning province plant in September 2016. Fushun said it expects to record a loss for 2017, and will need to revise previous financial results after discovering false asset data during an internal review. Photo: VCG

The Shanghai-listed subsidiary of bankrupt steel-maker Dongbei Special Steel has acknowledged that it falsely reported assets and is at risk of being delisted.

The disclosure by Fushun Special Steel deals another blow to Dongbei Special Steel’s creditors and investors, as it leaves them holding an asset far less profitable than originally thought following a 10-month tug-of-war with the bankrupt company.

The Liaoning province-based Fushun said it expects to record a loss for 2017, and will need to revise previous financial results after discovering false asset data during an internal review, according to a filing with the Shanghai Stock Exchange on Wednesday.

The company’s shares have been suspended from trading since Tuesday pending a regulatory review.

Dongbei Special Steel, which holds a 38.22% stake in Fushun, is currently under bankruptcy restructuring after the state-owned steel-maker defaulted 10 times on billions of yuan in bonds. Fushun was excluded from the restructuring because it was then considered a profit-making unit.

Liaoning province’s securities regulator ordered Fushun to make changes after it identified problems with the company’s management and accounting practices, according to Fushun’s stock exchange filing. The local securities regulator also said there were numerous “weak links” in Fushun’s asset management methods, including its management of inventory, fixed assets and products under construction, so the regulator could not reasonably guarantee that information in Fushun’s financial reports was either true or complete.

Fushun specializes in steel production as well as research into military and industrial materials. According to a document drafted by the Liaoning government that came to light in July about tackling the debt crisis in Dongbei Special Steel, the province wanted to safeguard the equity of Fushun, as its business was involved in the military industry.

Fushun has a market capitalization of 7.15 billion yuan, based on its last trading price of 5.50 yuan per share.