China, UK to Sign $13 Billion in Deals on Theresa May Trip

By Chen Mengfan and Wu Gang 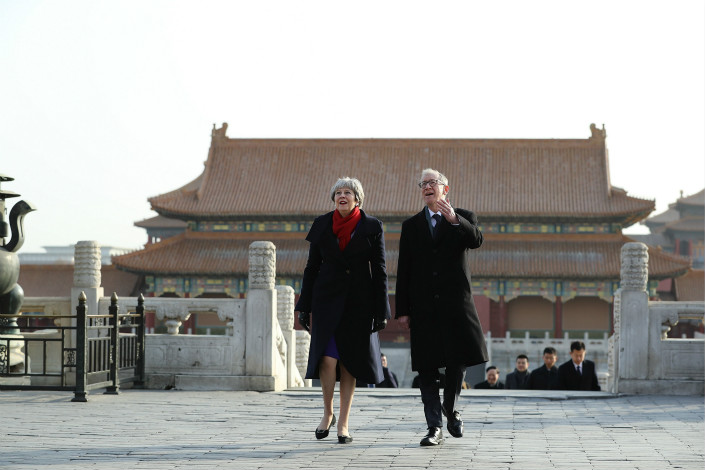 British Prime Minister Theresa May and husband Philip visit Beijing's Forbidden City on Thursday. In the Chinese capital, May met representatives from a council of 31 Chinese and British firms covering industries including finance, energy, cars, telecommunications and pharmaceuticals, according to China’s Ministry of Commerce. Photo: VCG

China and the U.K. will sign $12.8 billion worth of business deals covering construction, finance, agriculture and technology, as British Prime Minister Theresa May makes her first state visit to the country accompanied by a 50-strong business delegation.

After stopping in the central Chinese city of Wuhan, where she announced educational cooperation programs, May went to Beijing on Wednesday evening to meet top Chinese leaders.

Chinese President Xi Jinping held a meeting with May on Thursday. The two leaders pledged to further cooperate in areas including trade, investment, technology, environment and culture, while promoting coordination on major global and regional issues, according to official Xinhua News Agency.

Xi at the meeting called on both countries to forge an enhanced version of the "Golden Era" bilateral ties, a phrase coined by Xi during his visit to Britain in October 2015.

To enhance bilateral ties, Xi said the two countries should continue high-level dialogues in areas of strategy, finance and culture to enhance mutual understanding; promote bilateral economic and trade cooperation; enhance exchange and cooperation within multilateral institutions such as the United Nations, G20 and the World Trade Organization; and reinforce people-to-people and cultural exchanges.

May said Britain shares similar views with China on many global issues and values China's role in international affairs.

Li said Sino-British trade and economic cooperation have entered a “fast lane,” but added that companies from both countries need to receive equal treatment when operating in the other’s market. “We will continue to optimize approval procedures for foreign investors entering the Chinese market. We also hope the British side will become more transparent and fair in their investigations into Chinese investment (in the U.K.),” Li said during a Wednesday meeting with May.

Gao disclosed the two sides will sign 9 billion pound in deals, but didn’t provide any details. Individual deal announcements are often provided by the companies themselves.

“The council will become an important platform for Chinese and British entrepreneurs to deepen cooperation under the ‘Belt and Road’ framework, particularly cooperation in actual projects,” Gao told a press meeting on Thursday in Beijing, speaking of the new bilateral council.

Belt and Road refers to an initiative launched by Chinese President Xi Jinping in 2013 aimed at boosting China’s trade and overseas investment with countries along the ancient Silk Road routes to Europe, Africa and Asian countries over land and sea. It has since become a major trade focus.

“We will work together to encourage free and fair trade, ensure a transparent, rules-based multilateral trading system, and build an open global economy that works for all,” she said.

China and Britain also agreed to jointly build a finance and technology park in North China’s Xiongan New Area, an area near Beijing slated for major development as an alternate location for companies and other offices that don’t need to be in China’s overcrowded capital. They also agreed to build an industrial park in the coastal city of Qingdao in east China’s Shandong province.