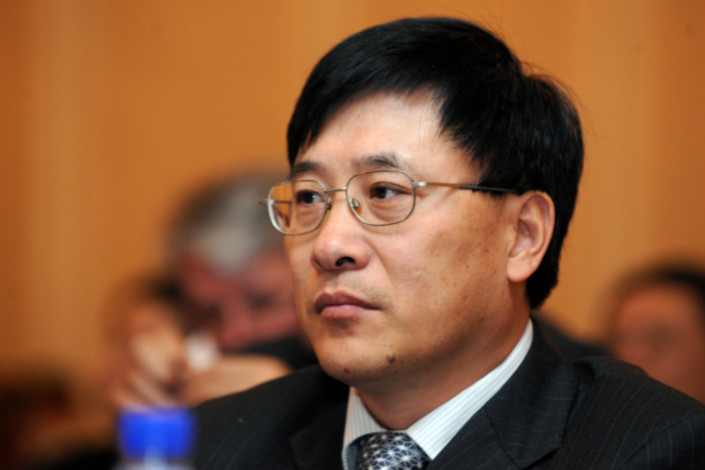 China Securities Finance Corp. (CSF), which led the so-called “national team” that propped up share prices after the 2015 China stock market turmoil, is appointing a new helmsman from the country’s top securities watchdog.

CSF is sanctioned by China’s State Council and the China Securities Regulatory Commission, and 100% of its shares are held by the Shanghai and Shenzhen stock exchanges, the Dalian and Zhengzhou commodities exchanges, and the Shanghai Futures Exchange.

CSF describes itself as “the only institution that provides margin financing loan services to qualified securities companies in China’s capital markets.”

Caixin has learned that CSF’s new general manager will be Li Qingying, vice director of the Department of Public Offering Supervision of the China Securities Regulatory Commission (CSRC). The appointment has been made known internally, while the official announcement and appointment are still pending, according to sources.

The personnel change will make Li the third general manager of the state-owned CSF since the company was established in 2011. He follows the first manager, Nie Qingping, who was later promoted to president of CSF; and Zhuang Mu, who became general manager in February 2014.

Li’s move will also focus the market’s attention on how the “national team,” a group of entities used by the central bank to move cash into the market, continues to play a role in China’s equity market.

Current General Manager Zhuang will be named chairman of the board of supervisors of the China Securities Depository and Clearing Corp., the state-owned securities clearing house, Caixin learned. The appointment hasn’t been officially announced yet.

Once an obscure agency, CSF injected massive rescue funds into the mainland stock market after the securities regulator boosted its capital base to 100 billion yuan (about $16.3 billion at the time) in July 2015. The funds, also coming partly from government-owned investment company Central Huijin Investment Ltd., helped shore up prices on the A-share market later that year, stabilizing the rout that wiped out two-thirds of the market’s capitalization in two months.

As the national team bought blue chip stocks and invested in larger companies to stabilize the market, other investors followed in its footsteps, showing less appetite for stock market risk. Blue chips have outperformed smaller caps since late 2016.

An unaudited annual CSF report dated Jan. 19 showed that the yearly profits of the company rose by 87.2% to 3.27 billion yuan in 2017, while revenues also jumped 85.3% to 4.3 billion yuan as of December. More than 85% of company’s revenue came from interest income on margin financing loans lent out to brokerages, the report showed, largely surpassing the portion stemming from its stock investment.

Li worked his way up the ladder in the securities regulatory system for more than two decades. He earned a reputation as a professional supervisor of the country’s public listings, and was known to have a strong sense of responsibility when emergency issues needed to be dealt with, Caixin learned.

Li made a rare public appearance at the latest internal meeting between regulators and securities firms held in Dec. 20, when he reminded the investment banking departments of securities firms to thoroughly investigate companies they plan to underwrite, in response to the plummeting stock issuance approval rate of a stricter CSRC reviewing panel.