Market Backs Up as IPO Approvals Slow to Crawl 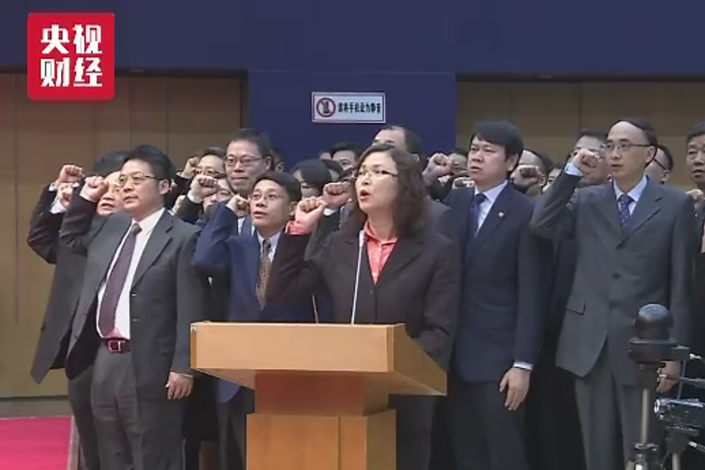 A screen grab of state television shows members of the new panel that reviews initial public offering applications getting sworn in at a ceremony on Nov. 20 in Beijing. Photo: CCTV

An approval rate of zero is unprecedented. A review panel under the China Securities Regulatory Commission (CSRC) rejected listing proposals from all three companies lined up for the session.

Although the panel detailed its reasons why each applicant didn’t pass the mark, market participants said they were befuddled by what they saw as an increasingly strict IPO review process, which appears to contradict what the CSRC chief pledged late last year when he vowed to speed up IPO approvals.

The panel, which was reshuffled in October, has given the green light to 57% of IPO applicants through November. That figure is down from 81% during the previous committee’s tenor, which lasted the first nine months of the year.

The slowdown in IPO approvals comes at a time when several CSRC officials who reviewed and approved of now financially crippled Leshi Internet Information & Technology Corp.’s listing plan are being investigated by judicial authorities on corruption allegations. Also, the composition and workflow of the panel was also changed to prevent corruption, but some bankers believe that has at least in part led to fewer IPO approvals.

Amid a backdrop of graft-busting, it could be more politically correct to be on the harsh side, the banker added.

New stock listings have always been a hotly contested policy area in China’s financial market. CSRC chief Liu Shiyu, who took the helm in March 2016, said the regulator would prioritize improving the quality of listed companies and market disclosure in part through reviewing IPO rules. One of his initiatives was allowing more IPOs, as hundreds of applications were still backlogged at the time he took the job.

“There has been some pressure on the IPO business since the regulator tightened its grip on applications,” an investment banker at a major Shanghai-based brokerage told Caixin. “Now, there is clearer evidence of ongoing and strict supervision.”

The current panel, which reviews new listings for both the main board and ChiNext, has 66 members, up from 60 in the previous panel. Two-thirds of the panelists are recruited from within the CSRC’s ranks, which has led some market participants to think the panelists do not have a strong market background and therefore are harsher in the review process.

The investigation into alleged corruption links with Leshi’s IPO has to some extent lowered the credibility of panelists who came from law firms and brokerages, market insiders told Caixin. The investigation is one factor that led to more CSRC members on the IPO approval board.

“As panelists, CSRC members have a strong political background for sure, but challenges remain as to whether that background means they are competent in the role,” an industry executive said.

Also, sources told Caixin that panelists are randomly assigned to any session only one week ahead of time to minimize the possibility of corruption and bribery. However, that also means panelists may not have enough time to become familiar with the sector and the company they are about to review, which puts applicants at a disadvantage.

The slowdown in IPO approvals isn’t something that’s going to change anytime soon, some market participants reckoned, especially after CSRC chief Liu said Monday that the commission will establish a new committee within the CSRC to closely oversee the panel.

“I guess what is left for us to do in the future is to follow that policy and select companies (for IPO) under strict standards,” another investment banker said.

On Nov. 7, the new panel approved one IPO application and rejected five others, citing suspected financial-data distortion and “unfair” transactions with connected parties. In its latest review on Wednesday, Bola Wangluo Co. Ltd., a developer of e-commerce websites currently traded on the over-the-counter market, was rejected for a listing on the main board due to its unclear shareholder structure, which contains private funds and trusts.