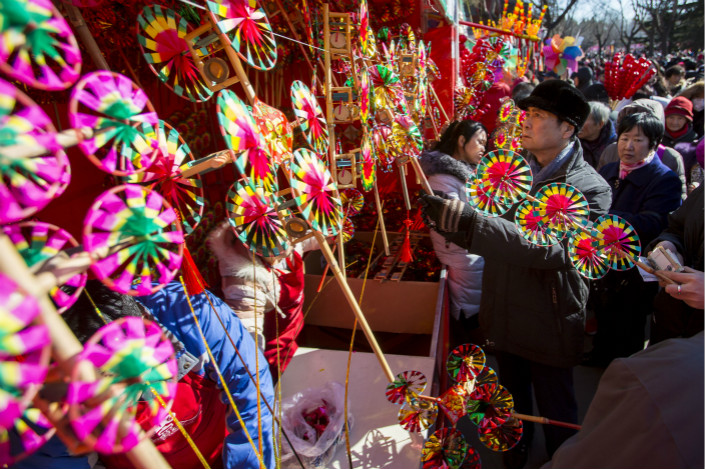 People buy traditional handmade pinwheels at Changdian Temple Fair in Beijing during last year's Lunar New Year holiday. The annual fair, which dates back to the Ming dynasty which ruled from 1368 to 1644, was stopped during World War II and was revived after a long hiatus in 2001, but many people have long complained that its now become commercialized. Photo: VCG

Are Chinese Lunar New Year traditions dying? While many young people complain the country’s biggest festival is losing its “authentic feel,” some small groups — both young and old — are quietly working to revive some traditions that are on the verge of disappearing.

“Chinese people are starting to value traditional culture and are becoming increasingly confident, especially after learning a lot from other developed countries since the opening-up policy, when many Chinese were more inclined to adopt Western culture and festivals,” said Yin Hubin, a folk customs researcher at the Chinese Academy of Social Sciences.

One such young cultural crusader is 20-year-old Wei Xilian, a Chinese calligraphy major who writes traditional couplets to show his respect to his grandparents.

“My grandparents are quite happy when they get my work and will paste it on their front door immediately,” Wei said “I remember they were quite surprised when I first sent them my own couplets because not many teenagers were able to write traditional calligraphy with brushes.”

He also sends handwritten red cards with New Year greetings to his friends.

The practice of exchanging cards, known as “bainiantie,” dates back to the Tang dynasty, which ruled China between 618 and 907. Noble families dispatched cards through servants to relatives and friends who they couldn’t visit.

“Fu” is the most popular character used in Lunar New Year decorations. The character, which first appeared during the Shang Dynasty, more than 3,000 years ago, has seen its meaning evolve from a prayer for more fertile land to embody wishes for longevity, wealth, health, spiritual serenity, to cultivating kindness and generosity, and a painless death. In modern times it’s also used to signify the desire to have a large family. Putting up decorations containing the character is a way to welcome all these blessings into your home.

“I love Chinese calligraphy and traditional Chinese poetry ,which are closely related to each other. Poetry conveys emotions shared by all people and using calligraphy to write them down is the best way to demonstrate the feelings and aesthetic,” said Wei, who started learning calligraphy at the age of 10.

Writing Spring Festival couplets is another tradition that is slowly fading away, as cheap, mass-produced poetry flood the market.

Spring Festival couplets are written with black or golden ink on red paper to express wishes for the new year, and are pasted vertically on both sides of the front door, with a four-character horizontal scroll – which summarizes the meaning of the poems ‑ pasted above the doorframe.

Zhao Jianyong, 47, from Hebei province, is fighting to keep the art of writing spontaneous, customized couplets alive. On the last 10 days of the Chinese lunar calendar, Zhao sets up a small table on a random street in his hometown in Jinzhou county, Shijiazhuang, and grinds his ink stone while he waits for passersby to request a handwritten couplet.

Zhao, who has done this for over two decades, said more people have started buying handwritten couplets in the last two years, although a pair costs between 10 yuan ($1.5) to 30 yuan, depending on the size of the scrolls.

“Most of my clients believe that handwritten couplets, rather than those printed by a machine, add to the authenticity of the celebrations because they have a tighter emotional connection to the writing and that the wishes are more sincere,” Zhao said.

Although the government-mandated Spring Festival holiday starts on Lunar New Year’s eve, traditionally, there is a seven-day preparatory period, with different customs that need to be followed.

The 23rd day of the last lunar month is dedicated to the “kitchen god” and people usually offer him tanggua, a melon-shaped molten sugar candy, to sweeten his mouth so that he’d put in a good word on behalf of the family to the Jade Emperor, a deity that bestows good fortune.

This day is also known as “xiaonian,” or the “little year.” The day after the kitchen god’s day is dedicated to cleaning house.

Yang Yilian, 79, who is strict about following rituals, said she never hired a cleaner, and did the dusting and scrubbing herself because it was way to show her love for her family and welcome in luck.

She spent the rest of the week cooking large batches of tofu, boiled pork and fried meatballs for New Year’s Eve dinner when the entire family would gather around her table.

While the grandmother from Guanqia village, Hebei still keeps the tradition of cooking all the festive foods at home, many families are opting to buy food from supermarkets and specialty stores. Some dishes that take days to make are disappearing off tables as they are replaced by cheap, mass-produced alternatives as youngsters don’t know how to cook these special dishes.

Sun Guihua, 90, still remembers how she worked late into the night every day from xiaonian to make steamed buns, sausages, stewed pork and beef, deep-fried twisted dough and fish delicacies.

It took her days to make the different types of bread, shaped like fish or animals from the Chinese zodiac, needed to decorate the ancestor’s shrine and adorn the dinner table. The grandmother from the Shandong province port city of Qingdao particularly misses one special delicacy known as a “date mountain,” cone of dough covered in dates and buns stuffed with sweet red bean paste or sticky rice.

Sun said she is “dismayed” by the loss of these traditions as young people in her family, like in most of other families, no longer show an interest in following these customs.

“But the New Year is no longer the same without the steam, the aroma of special dishes being cooked in the home kitchen and the frantic race against the clock till it’s time to start the countdown for the New Year,” she said.

While some mourn the loss of tradition, some small groups are even lobbying government to revive old spring festival traditions.

Once such example is a citizen-led campaign to hold Beijing’ Changdian Temple Fair in its original location. The annual fair, which dates back to the Ming dynasty which ruled from 1368 to 1644, was stopped during World War II and revived after a long hiatus in 2001. But several important booths and performances were shifted to Taoranting Park in south Beijing in 2010 from its original location in nearby the Liulichang old quarter. And since then people have complained that the fair has become too commercialized.

“Many citizens have complained in recent years that all they can do at a temple fair is eat barbeque skewers and buy cheap trinkets and playthings” said Xi Xiaohui, the organizer of the Changdian Temple Fair. “Many with cultural and artistic tastes preferred to go to museums instead of a temple fairs. They all want a temple fair that has traditional cultural elements.”

This year, organizers have decided to add a bit of old-school charm and exhibit rare books and invite centuries-old brands to sell their wares at the original fair location. Some experts will also employed to introduce different cultural activities.

“It’s an attempt to protect the intangible cultural heritage, including its historic location, which provides and environment where modern people can feel the historic atmosphere of this temple fair,” said Zhao Shu, an expert in folklore at the Beijing Research Institute of Culture and History.