First Day of Chinese New Year Is a Box-Office Winner 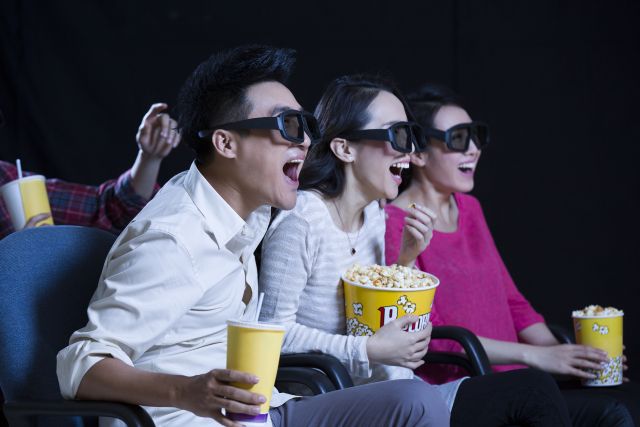 Movie-ticket sales on Friday — the first day of the Chinese Lunar New Year — jumped by nearly two-thirds to 1.32 billion yuan ($208 million) compared to the same day of the holiday a year ago. Above, moviegoers in China in an undated photo. Photo: VCG

The Year of the Dog may turn out to be a howling success for China’s movie industry.

Movie-ticket sales on Friday -- the first day of Chinese Lunar New Year — jumped by nearly two-thirds to 1.32 billion yuan ($208 million) compared to the same day of the holiday a year ago. Analysts say that signals another robust year ahead for the Chinese film industry.

Real-time ticket sales, including service charges for moviegoers who bought tickets online, surged above 900 million yuan around midday Friday. That exceeded the 802 million yuan in box office sales on the first day of the lunar new year in 2017, according to Maoyan.com, a Chinese box office tracking service provider.

Ticket sales for the seven-day holiday — which began on Thursday, on the eve of the Chinese Lunar New Year — are expected to handily beat the 3.3 billion yuan recorded during the previous holiday season due to rave reviews for several new big-budget productions, some industry analysts said.

Several Chinese-made productions are dominating domestic screens, including the second installments of “Monster Hunt” and “Detective Chinatown” and the third installment of “Monkey King.”

“Monster Hunt Two,” a 3D film wrapping in fantasy, action, comedy and adventure, took in in 555.5 million yuan Friday, making it the highest-grossing film of the day, according to Maoyan.

“The Detective Chinatown Two,” a wacky adventure comedy set in New York’s Chinatown, came in second place, with 342.9 million yuan in one-day ticket sales on Friday, followed by “Monkey King Three,” the latest franchise adapted from the Chinese classic “Journey to the West,” which raked in 168.3 million yuan the same day.

“Operation Red Sea,” a patriotic action film on the evacuation of hundreds of Chinese nationals and foreigners from Yemen’s southern port of Aden during the civil war in Yemen 2015, took in 127.8 million yuan in box office sales.

“Operation Red Sea and Detective Chinatown Two” received 9.6 and 9.3 out of 10, respectively, in viewer’s ratings on Maoyan. “Monster Hunt Two” was given a 8.5 out of 10 by moviegoers on Maoyan, while “Monkey King Three” received a 7.7.

“Boonie Bear: The Big Shrink,” the only animation featured in the top five films of the day, received a 9.2 rating and grossed 75.5 million yuan on Friday.

In all of 2017, movie ticket sales reached 55.9 billion yuan, an increase of 13% over the previous year. That was a return to strong growth after 2016, which saw only a 4% year-on-year increase, according to the State Administration of Press, Publication, Radio, Film and Television.

However, some of the surge last year was due to service charges beginning to be included in box office sales figures.