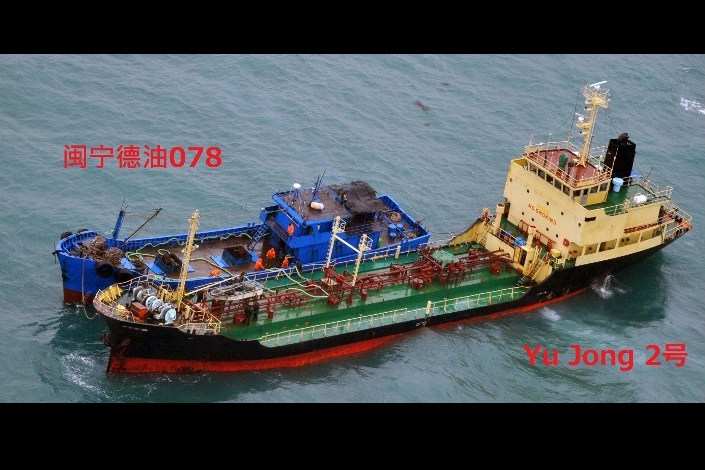 The Yu Jong 2, a North Korean-flagged tanker, sits next to a small, blue vessel of unknown nationality in the East China Sea, in a photo taken by a Japanese maritime surveillance plane on Feb. 16. China said it is investigating a possible breach of U.N. sanctions since Chinese characters were on the blue vessel. Photo: Japanese Ministry of Foreign Affairs

China said Thursday it is investigating a Japanese report that a ship marked with Chinese characters transferred cargo to a North Korean vessel in violation of U.N. sanctions.

“We attach great importance to the relevant information and are carrying out an investigation,” Chinese Foreign Ministry spokesman Geng Shuang said Thursday.

“China has been fully and strictly implementing the Security Council resolutions,” he said.

The investigation comes after Japan’s Foreign Ministry on Tuesday posted photos of Yu Jong 2, a North Korean-flagged tanker, lying alongside a small vessel of unknown nationality, “around 250 kilometers (155 miles) offshore from Shanghai” in the East China Sea.

The photos, taken on Feb. 16 by a Japanese maritime surveillance plane and an escort vessel, show the two ships with what appear to be hoses running between them. Four Chinese characters and a number that read “Min Ningde You 078,” meaning “Fujian Province, Ningde city, oil tanker 078,” are seen on the bow of the smaller vessel, the Japanese Foreign Ministry said.

Tokyo said it had reported the incident to the Security Council and shared information with relevant countries.

It is the third time this year that Tokyo has reported a cargo transfer between a foreign ship and a North Korean vessel in violation of U.N. sanctions imposed after Pyongyang ratcheted up its nuclear and ballistic-missile programs.

The Security Council slapped three sets of sanctions on North Korea last year: one on Aug. 5, aimed at the iron, coal and fishing industries; another on Sept. 11, squeezing textile trade and oil supplies; and the latest on Dec. 22, targeting refined petroleum products.

China’s trade with North Korea fell to $215.97 million in January, the lowest since June 2014, according to data from the General Administration of Customs released on Friday.

Last year, China’s Ministry of Commerce ordered North Korean businesses in China, including joint ventures with Chinese partners in which North Korea is the majority stakeholder, to wind down operations by early January.