By Poornima Weerasekara and Yu Bokun 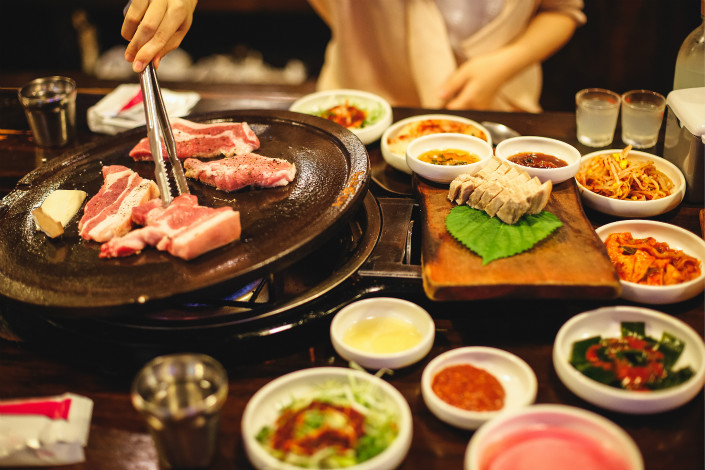 Several of Beijing's North Korean restaurants are expected to close after the China government ordered North Korean companies in the country to wind down by mid-January. Photo: Visual China

When the Alaska pollock, the “national fish of the Korean peninsula,” started disappearing from menus at Beijing’s North Korean restaurants in late August, it was a sign China’s trade sanctions on Pyongyang had taken effect.

Now, some of the restaurants themselves are on the brink of closure after China ordered all North Korean businesses in the country to wind down by mid-January. This has been Beijing’s sixth and toughest sanction since April 2016 in response to Pyongyang’s repeated ballistic missile and nuclear tests.

“All of our staff will be sent back to North Korea when the restaurant closes in three months,” said a waitress at Unban, a popular restaurant near the sprawling North Korean embassy in downtown Beijing.

Jin is among a small group of North Koreans sent by the regime to work abroad. The 19-year-old says she came to Beijing seven months ago, right after finishing high school. Several other workers told Caixin that they had a bachelor’s degree. It is unclear how many North Korean nationals are working in China, but in addition to restaurant workers, Chinese media reports show there are others employed as animators, coal miners or software developers.

China’s Ministry of Commerce said in a statement on Sept. 28 that it was giving North Korean businesses and individuals in China, as well as joint ventures between Chinese and North Korean companies, 120 days to close. The countdown started Sept. 11, the date the United Nations Security Council imposed a tough new round of sanctions against Pyongyang.

But, some joint ventures that have a Chinese company as the majority stakeholder have said the sanctions won’t affect them.

The Chilbosan Hotel in downtown Shenyang, Liaoning province, is one such company. Data from China’s National Enterprise Credit Information Publicity System shows that Shenyang Qi Baoshan Hotel Co. Ltd. is co-owned by Korean landscape economic exchange and Dandong Hongxiang Industrial Development Co. Ltd., which is the main Chinese stakeholder. There is no data available to show where the North Korean partner is registered. But Chilbosan’s only other branch, a four-star hotel, is in North Korea.

An employee from the hotel, speaking on grounds of anonymity, told Caixin that the company “has no plans to close.”

Haedanghwa, a restaurant in Dongdaqiao with North Korean workers, also plans to stay open after the January deadline. “We won’t have to shut down, because our ‘big boss’ (owner) is Chinese,” said a waitress at Haedanghwa, with the Chinese name Zhao Xiuxiang.

Caixin was unable to verify whether Haedanghwa is a Sino-North Korean joint venture or a solely Chinese-owned business. But most of the waitresses employed there are North Korean nationals.

The 23-year-old waitress Zhao told Caixin that she was sent to China by the Pyongyang government after completing her degree in business administration. “I’ve been here for about 2 1/2 years and I’ll go home next year after finishing my three-year contract,” she said.

Zhao spoke in Chinese with a Korean accent and said she taught herself Chinese after coming to Beijing. That conversation was in early October, and if Zhao’s statement is right she would still be working after the Chinese government’s deadline.

Despite the tough wording, China will seek to be “more flexible” in the enforcement of sanctions, said professor Zhao Tong, a researcher on nuclear issues at the Carnegie-Tsinghua Center for Global Policy.

Migrant workers “won’t be banned, but no fresh recruitment will be made,” Zhao said, indicating that workers with contracts might be allowed to stay until their agreements expire.

“China has agreed to all U.N. sanctions (announced on Sept. 11)…. But if there are any written clauses that can be interpreted flexibly, China may not follow the strictest standards,” he added. “After all, China is fundamentally not in agreement with the use of sanctions in policies toward the DPRK (Democratic People’s Republic of Korea), which could cause a backlash from North Korea.”

Nonprofit organizations are exempt from the sanctions.

The situation has left some wiggle room for companies like Beijing Yuan Mansudae Culture Co., which operates an art gallery exhibiting works from North Korean painters and sculptors in Beijing’s 798 Art District.

“Sanctions have no direct impact on our civilian institutions, and our art museum will remain open as usual,” said its Chairman Ji Zhengtai, who didn’t offer details on whether the gallery was operating as a nonprofit.

North Korean art is known for its meticulous attention to detail and stark realism. One 4-meter panel titled “Constructing Power Plants,” jumps into sight as one enters the gallery. The vivid colors with a red flag, grey smog, yellow caps and different shades of blue for each worker’s shirt paint a cozy picture of camaraderie. Another work, “Mountain Spring,” shows two female commandos on a snowcapped mountain.

The only staff member at the gallery declined to say how much the paintings cost, but they are for sale. The gallery’s official English website says “all works shown in this web-site are on sale. They belong to an Italian company and were purchased before the U.N. sanctions went into effect.”

“Their price is usually higher since they are offered mainly to Chinese collectors that have more familiarity with Mansudae artists,” it added.

It is unclear what channels will be used to transfer money to North Korea because China’s central bank has instructed banks to stop providing financial services to North Korea.

The gallery’s website says “all transactions are made with an Italian company, not directly with the Mansudae Art Studio nor with any North Korean company. The transactions are regulated by Italian (European) law and shipping is made from Italy.”

Ji didn’t answer questions about whether there was a link between the unnamed “Italian company” and Beijing Yuan Mansudae Culture.

The art studio may be among a dwindling list of foreign exchange sources for the so-called hermit kingdom.

The sharp decline in imports in September after only a 1 percent drop in August was triggered by China ban on all imports of seafood, iron ore and textiles from North Korea. The ban started on Aug. 15.

“Huge quantities of seafood were imported from North Korea through Hunchun, a city in Jilin Province,” said a professor from Tsinghua University who specializes in Sino-Korean relations. Hunchun is the closest access point to the Sea of Japan from China. “All the aquatic products were left rotting at the port (in late August),” he said.

“It (the ban) has also affected major logistics companies in Dandong (the largest city near the Chinese border with North Korea), and many fishery representative offices have stopped operating,” said the professor, who wished to remain anonymous. “In the past, there were four to five ships bringing in imported aquatic products each week, but after the sanctions, they weren’t allowed to enter the port.”

It will also be hard for Chinese companies to recover the money they invested to build cold-storage facilities and aquatic product processing plants in North Korea, he said.

While the sanctions may affect the supply of seafood in Chinese cities close to the North Korean border, their impact is more deeply felt on the other side.

“The first round of sanctions on coal cut off the most important source of foreign exchange for Pyongyang and cost the country about $2 billion per year,” said Zhao from the Carnegie-Tsinghua center. “Consecutive bans on the import of minerals and seafood will cut foreign currency receipts by another $1 billion per year,” he estimated. “Later, when the restrictions on migrant workers come into effect, the inflow of foreign exchange may shrink to hundreds of millions of dollars per year.”

North Korea’s battle-hardened economy has found ways to survive despite attempts to squeeze its legitimate channels for earning foreign exchange.

“North Korea has developed its own agricultural and manufacturing system from the very beginning, and gradually, its resistance to sanctions has grown stronger,” said Zhao. “It has also developed some abilities to avoid sanctions, including the use of third parties, shell companies smuggling operations and black markets.”

There is no exact data on the extent of cross-border smuggling between China and North Korea.

“Smuggling is an open secret, there are always people hitchhiking across the border, and there will always be a gray zone, before and after the sanctions,” said the Tsinghua professor.

“Some Chinese people who had legitimate businesses have now turned to illegal smuggling because their companies’ have had to close,” said Lü Chao, a research fellow at the Liaoning Academy of Social Science.

China’s porous border with North Korea spans 1,350 kilometers (840 miles), or a little more than the distance from Berlin to St. Petersburg. It’s marked from west to east by the Yalu River, Paektu Mountain and the Tumen River. “Locals still use boats, cars, trucks and several rail lines to carry diesel fuel, silkworms and cell phones back and forth across the Yalu,” according to a Bloomberg report on Sept. 15.

“Apart from fuel, the biggest item that was smuggled in the past from North Korea was drugs (like meth),” Lü said. “Most of the smugglers from China are acting individually, while in North Korea the state may encourage people to do this and turn a blind eye — though they wouldn’t admit it.”

There’s an old Chinese saying that says “while the priest climbs a foot, the devil climbs 10.”

Experts are concerned that illegal activity may proliferate as China tries to curb Pyongyang’s nuclear ambitions with economic sanctions.