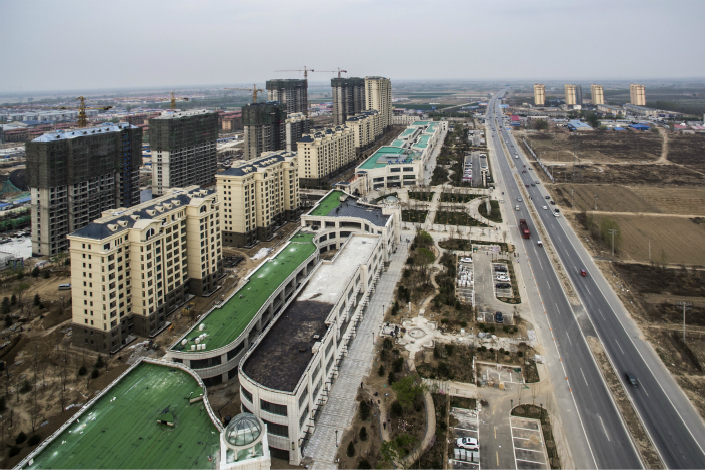 The Xiongan New Area is seen in this April 3 photograph. The Politburo Central Committee said that “significant progress” has been made in the drafting of the blueprint for the area, and a number of major infrastructure projects will be kicked off “at proper times,” Photo: VCG

The Communist Party’s Politburo Standing Committee, China’s top decision-making body, held a meeting on Thursday in Beijing to listen to a report on the drafting of the blueprint for the new area. Xi Jinping, the Chinese president and head of the Communist Party, also attended the meeting.

Xiongan New Area, slightly more than 100 kilometers (62 miles) south of Beijing in Hebei province, was announced in April as a place to catalyze the development of Beijing, Tianjin and Hebei, while also easing some of Beijing’s metropolitan burdens.

The planned new zone has been described as comparable to the special economic zone in South China’s Shenzhen and the Pudong New Zone in East China’s Shanghai, which were established decades ago. The two zones have often been credited as drivers of China’s economic reform and opening-up.

The committee said at the Thursday meeting that “significant progress” has been made in the drafting of the blueprint for the Xiongan New Area, and a number of major infrastructure projects will be kicked off “at proper times,” according to a report from the state-owned Xinhua News Agency.

The authorities have created high expectations for the new area, in which a new city will be built on what was once swamps and farmland. The authorities have said that it will be a smart, eco-friendly city that will foster creativity and technological innovations and be a model for the whole nation.

Thousands of polluting factories have been shut down around the area’s Baiyangdian lake, and hundreds of millions of yuan is being invested to treat its polluted waters. Dozens of state-owned and private companies, including China Telecom, People’s Insurance Company of China, and tech giants Alibaba, Tencent and Baidu, have announced plans to set up branches in Xiongan, according to earlier reports.