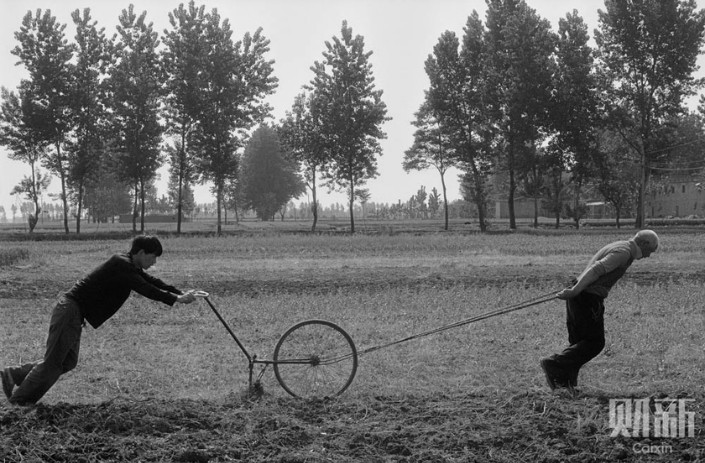 Two farmers plough a field using a tool made from a modified bicycle wheel in 2003 in Ruyang village, Henan province. Photo: Zhang Huibin

China was once the world’s bicycle capital, but rates of bicycle ownership slumped as the economy boomed. However, the rise of bike-sharing services in recent years seems to have reignited China’s faded passion for cycling. Veteran photojournalist Zhang Huibin takes a trip down memory lane to growing in up rural Henan province in the ‘70s and ‘80s, when the humble bicycle still reigned supreme on China’s streets.

I first rode a bicycle when I was 10 years old in 1974. My family and I went to see off my eldest brother at the train station. He was returning to his military barracks after a brief holiday. My father encouraged me to learn to ride my brother’s bicycle. “Go on, have a try,” he urged while we were on our way to the station. I put my left foot on the pedal, while pushing the bike forward with my right foot.

The 28-inch-wheel “Forever bikes” with a crossbar, were the most widely used bicycles at the time. Children who were too short to reach the seat were told to stand on one pedal and poke a leg under the crossbar to reach the other pedal. You’d pedal a little and take your leg off the other pedal, then stick it back through and pedal a little more, creeping along until you got to where you were going.

Brand-new bikes were rarely seen in the ‘70s, and most bikes were rickety, every part creaking except the broken bell. It was common to fix fallen pedals, broken chains, loose pegs and broken spokes, and cyclists became bike-fixing experts over time.

Foot injuries were common among cyclists. The axle that would jut out if a pedal fell off was the most dangerous component. When a bicycle started creaking because one side of the pin connecting the pedal arm to the gear crank had worn off, we would remove the pin and reverse it. The same pin would be used until it had completely worn out and snapped. Apart from this, repairing and inflating tires were also basic skills, while reattaching broken chains was reserved for the real experts. The most difficult task was changing broken spokes and making sure that all spokes were of the same length. Only veterans were able to change the steel ball bearings and the steel wire in the rear derailleur, which controls the gear system.

The ‘bike-riding men’ and ‘oily legs’

It was hard to ride on muddy roads, especially on rainy days when mud clogged the gap between the wheel and the mudguards. When the wheels would get stuck, cyclists would have to remove the mud with a stick or carry the bike on their shoulders. Often our pants got stained with the lubricating oil on bike chains because there were no chain covers, and you would end up with what we’d call “oily legs.” As time passed, we got chain covers, which evolved into chain sets, our level crossbars changed into slant frames, and heavy bikes became much lighter and more fashionable.

When I started learning photography in the early 1990s, I cycled to pig markets in nearby towns, attaching a tripod to the crossbar and putting my camera bag in a big basket. I would cycle anywhere between 5 kilometers (3.1 miles) to 50 kilometers, and my buttocks ached after the long rickety rides.

Pig farmers also cycled to the market with their scales. Big traders often came in trucks or tractors, while others rode bikes with layered baskets on each side of the bike filled with piglets.

Once I saw an old man put one piglet into a bag attached to a bike. However, the piglet died before he left the market in the scorching summer heat. He cried, “How stupid I am! How can I tell my children?”

Some people stood on bikes, turning them into a stage for storytelling near the Paima Street book store. Listeners would sit or stand on their own bikes.

Sometimes I would climb up on to my bike frame to take photos while some villagers held on to the bike to stabilize it. I photographed storytellers carrying drums, string instruments and trumpets to the book market, and those who waded through rivers with their bikes. The way in which bikes were used in the ‘70s was only limited by one’s imagination.

Bikes were nicknamed “donkeys” in rural areas for their load-bearing capacity. Bikes were frequently used for transporting goods rather than carrying people in villages. One had to have the strength and dexterity of a trained circus performer to ride those “donkey bikes” laden with baskets full of goods. People also dated on bikes. You could hug your girlfriend as you zigzagged across crowded lanes with her sitting on the crossbar. It felt more magical than sitting in a racing car, because you could feel the wind in your hair.

One way of showing your love was to ride uphill with sweat rolling down your brow even as your girlfriend insisted on hopping off the bike and walking. Young men would grind their teeth and ride straight to the girl’s doorstep. But, soon after marriage most men would ask their wives to get off the bike even if they are riding over a small hillock, and this became a long-running joke among women.

The bike as a companion

My bicycle had always been my companion. On my way to and from school and work, while I was riding around aimlessly with my girlfriend and when I had to rush my family to hospital or elsewhere after I got married. I experienced so much while on my bike — I’ve fallen, bumped into other bikes and even hit pedestrians. However, my life of pedaling came to an abrupt end after I decided to buy a motorbike when my last bicycle was stolen.

Zhang Huibin is the editor of China Photographers’ Magazine and former deputy editor-in-chief of China Photography Press. His well-known works include “Poetry in the Central Plains,” “Bicycles in the Countryside” and “Beijing at Night.”