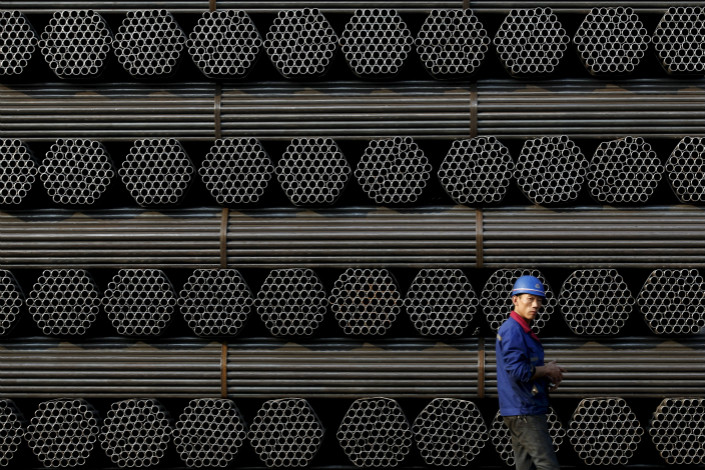 A worker walks past steel pipe in Tangshan, Hebei province on Nov. 3. The city accounted for around 11% of the crude steel produced in China last year. Photo: VCG

One of China’s largest steel-making cities will extend production curbs for another eight months after the end of the current heating season, as part of an effort to maintain improved air quality, according to a government document released Friday.

Tangshan, in northern China’s Hebei province, will require steel mills to avoid using at least 10-15% of their capacity from March 16 to Nov. 14, the city government said.

The city’s steel producers have already been operating under restrictions brought by a nationwide campaign to reduce air pollution. Steel producers in multiple Hebei cities, including Handan, Tangshan and Shijiazhuang, were ordered to keep their blast furnace utilization rates under 50% during the official winter home-heating season, which started in mid-November and is expected to end on March 15.

China’s anti-pollution campaign, which also included restrictions on coal production and transportation, appears to have been effective, with air quality in notoriously smoggy Beijing improving significantly from 2016 figures through mid-winter.

The extended curbs would push down Tangshan’s steel output by 9.875 million tons between mid-March and mid-November this year. Tangshan is one of the country’s major steel production centers. The city accounted for around 11% of the 832 million tons of crude steel produced in China last year.

Although the Tangshan city government is still seeking opinions from industry participants on the rules announced Friday, the curbs outlined in the document are expected to be implemented without much revision.

Industry participants had predicted an upsurge in production after March 15, with daily steel production forecast to reach as high as 2.5 million tons, said Xu Xiangchun, director of market information portal Mysteel.com. However, the newly announced curbs have since lowered expectations, Xu said.