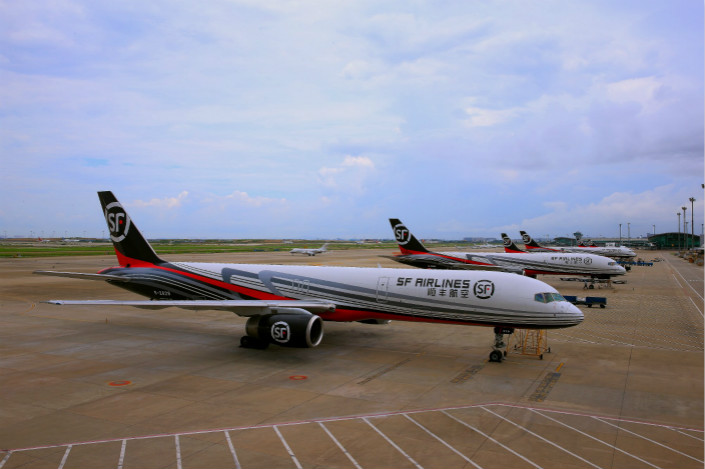 A subsidiary of courier powerhouse SF Express and the Hubei provincial government will primarily fund the new cargo airport, which is slated to cost around 37.3 billion yuan. Photo: VCG

Plans for a cargo airport backed by courier SF Express Co. Ltd. have been approved by the State Council, China’s cabinet, the final regulatory hurdle before ground can be broken.

The airport — which will be built in the city of Ezhou, 98 kilometers (61 miles) from Wuhan, the capital of Central China’s Hubei province — was approved by the Civil Aviation Administration of China (CAAC) in 2016, pending the green light from the State Council.

The airport — which is slated to cost around 37.3 billion yuan ($5.9 billion) — will be mainly funded by SF Express-subsidiary Shenzhen SF Taisen Co. Ltd. and the Hubei provincial government. The CAAC and the National Development and Reform Commission, China’s top economic planner, will also contribute.

The final approval arrived around two months after SF Express said it signed an agreement with the government-affiliated Hubei Transportation Investment Group and the Shenzhen Agricultural Bank to set up a 50 billion yuan joint venture to steer the project. The three companies will hold approximately 46%, 49% and 5% stakes, respectively, in the new company.

The planning phase is complete and construction will begin soon, according to Ezhou government officials, though a specific date for the groundbreaking has not been decided.

The airport will be tailored to the needs of SF Express, but the Hubei government will also invite other freight firms to make use of it. The airport is expected to have an annual cargo capacity of 2.5 million metric tons (2.75 million tons) by 2025, and up to 3.3 million tons by 2030, according to the State Council.

SF Express, which already has partnerships with several airlines and operates more than 50 air routes in China, hopes that the Ezhou airport can act as a hub to further improve its delivery network. The company is now China’s largest courier, with a fleet of 41 aircraft, 15 of which were being leased as of the end of 2017.

Other couriers are also ramping up their efforts to meet booming demand in China’s delivery market.