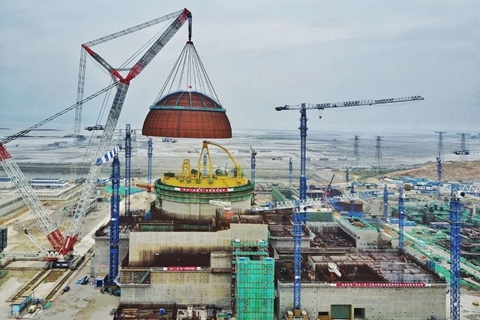 China has given the green light for two of its largest nuclear-power firms to merge as it continues to consolidate state-owned enterprises to reduce overcapacity and improve operating efficiency.

The two companies have been under direct supervision by the China State-Owned Assets Supervision and Administration Commission (SASAC). CNECC will become a subsidiary company of CNNC, according to the announcement by the regulator. The merger will reduce the number of enterprises run by the central government to 97, compared with 117 in 2012.

The merger will create a new nuclear powerhouse with assets worth more than 600 billion yuan ($95.4 billion), according to estimates based on the two companies’ financial statements.

The nuclear merger is among a handful consolidation deals in China’s energy industry.

Mergers have also taken place in other sectors, including tourism and construction materials.

In the steel industry, which has long ben plagued by overcapacity, Baowu Steel Group was formed late last year in a merger between Baoshan Iron and Steel Group and Wuhan Iron and Steel, making it the largest steel producer in China, and the second largest in the world.

A merger between China State Shipbuilding Corp. and China Shipbuilding Industry Corp. is expected to be next, analysts said.