Will Merged Coal, Power Giants Live Happily Ever After? 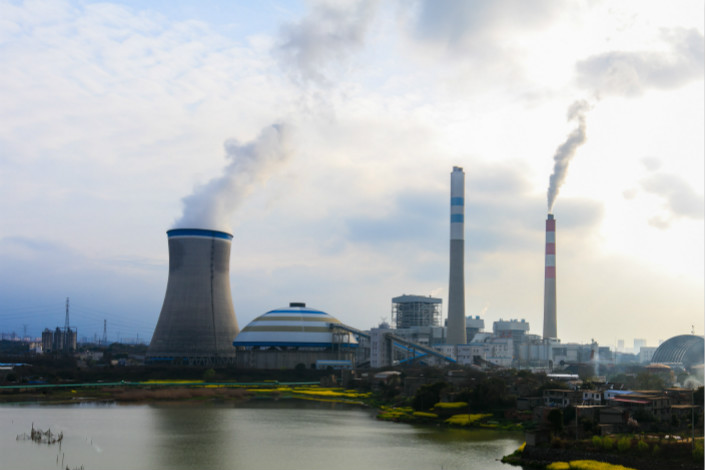 Analysts say that the new conglomerate that will be created by the merger of coal-mining company Shenhua Group Corp. Ltd. and power generator China Guodian Corp. will be the world's biggest power producer. Above, the China Guodian power plant in Jiujiang, Jiangxi province, is seen on March 11. Photo: Visual China

A government-approved plan to merge two energy giants and create the world’s largest electric power company is winning praise from supply-side reformists but drawing concern from analysts who fear what they believe is a marriage of unequals.

With assets of 1.8 trillion yuan ($273 billion), analysts say the new conglomerate, China Energy Investment Corp. Ltd., will have an installed capacity of about 225 gigawatts, eclipsing France’s Electricite de France SA and Italy’s Enel to become the world’s biggest power producer. A date for finalizing the deal has not been announced.

The merger plan marks the latest example of Beijing’s effort to consolidate state-owned enterprises (SOEs) and reduce overcapacity in targeted industries through its supply-side reform initiative. The reform effort’s push into the energy sector has the added goal of cleaning up the nation’s polluted air.

Some analysts say the Shenhua-Guodian marriage is unusual because their business fields, while related, are quite different. Moreover, analysts see potential for conflict since each company has its own culture and background.

As an example of one business relationship that yields fruit, the Guodian side of the new entity should benefit from better cost control via easier access to stable coal supplies from Shenhua’s mines.

Coal prices in China have been largely market-based since 2002. But electricity prices are still strictly controlled by the government through a state-managed regional benchmarking system.

The gap between coal and power pricing systems has led to inter-industry conflicts. If coal prices rise, for example, power producers are not allowed to raise customer prices to offset their increased costs. Coal-fired power plants account for nearly 60% of China’s electricity supply.

These industries also have crossover interests. Coal companies as of this year owned about 180 million kilowatts of installed power capacity nationwide, while the coal output capacity controlled by electric companies exceeded 180 million tons.

From 2004 to 2011, coal prices rose 200% and coal mining company profits jumped tenfold. Power producers, however, did not reap similar benefits, as prices paid by electricity users increased less than 40% during that period. As a result, China’s five largest power producers, including Guodian, reported losing hundreds of billions of dollars between 2008 and 2011.

Small-mine closures through the supply-side reform initiative helped increase the Bohai-Rim Steam-Coal Price Index coal price 56% to around 580 yuan per ton as of early September compared to early 2016.

The Shenhua-Guodian merger will give each side access to the other’s products and facilities, and thus should reduce or eliminate price volatility. How the change will ultimately affect coal prices, however, is unclear.

Nor is it clear whether their marriage will be amicable.

Since the “market-priced coal and state-planned electricity” system will not change, miners and power generators still have the potential for friction, a source familiar with the power industry told Caixin.

“A large-scale of merger such as that between Shenhua and Guodian would not be possible without a strong government push,” a source familiar with the power industry told Caixin. “‘Getting married’ would otherwise be impossible, considering their burdensome issues, arrangements and personalities.”

Another expert from the electricity industry who declined to be named said that the only way to eliminate all conflicts would be for the government to “abolish benchmarks and price plans for electricity.”

That change would “allow the industry to fully reflect not only fluctuations of raw materials such as coal, but also market demand,” the expert said.

A source told Caixin in July that the government’s State-Owned Assets Supervision and Administration Commission (SASAC), which oversees central government SOEs, was drafting a plan aimed at reducing the number of companies under its supervision to about 80 from the current 98.

Streamlining and consolidating SOEs is part of Beijing’s plan to reduce capacity in targeted industries.

SASAC officials say the work of reducing capacity is extremely challenging because the current projects and operations of central government-controlled SOEs are massive in scale and thus difficult to close. SASAC thus plans to shut down projects that have already been suspended or postponed.

For the coal and electricity sectors, the capacity-reduction process will take a much longer time than was needed to trim excess steel industry output, a SASAC official who declined to be named told Caixin.

On the other hand, some analysts note merging Shenhua and Guodian should bring plenty of positive results.

“The merger of two central government-controlled SOEs can at least inhibit their desires to boost investments,” one analyst said. “Now they can get the resources and assets they need from each other.”