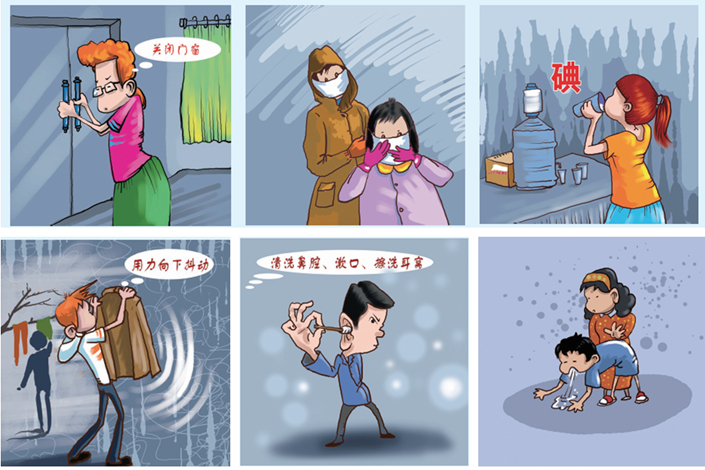 Cartoons about nuclear war published in the Jilin Daily tell people to cover themselves up, keep clean and even induce vomit if they suspect they have consumed contaminated water or food. Photo: Caixin

Chinese social media is buzzing about a full-page advisory with cartoons offering survival tips during a nuclear strike, published in an obscure provincial newspaper on Wednesday.

China’s foreign ministry and state-controlled media have since downplayed the significance of the advertisement, saying it was part of a “usual and routine national defense awareness campaign.”

The full-page ad titled “General Knowledge about Nuclear Weapons and Protection,” was published in the Jilin Daily, a newspaper controlled by the party establishment in the northeastern province, which shares a border with North Korea.

The campaign advised people to shutter their doors and windows if they couldn’t reach an air raid shelter and hide under a table or a bed. But the ad spooked many readers given its timing.

It came less than a week after North Korea claimed that it had successfully tested an advanced intercontinental ballistic missile. It was the 20th ballistic missile launched by the country this year and has escalated tensions on the Korean Peninsula. Many in China are also fearful of a nuclear attack by North Korea, which shares a long border with China.

The Jilin Provincial People’s Air Defense Office, a provincial government agency overseeing infrastructure needed to guard against an air raid in the region, sponsored the page. After it was unexpectedly thrust into the national spotlight, the authority urged the public not read too much into it, saying that it has carried out similar campaigns in the past.

Geng Shuang, a spokesperson for the foreign ministry, also sought to put a humorous spin on the awareness campaign during the ministry’s regular press briefing Wednesday. In response to a reporter’s question he said, “it never occurred to me that you’re a reader of the Jilin Daily,” in an implicit reference to the paper’s limited readership outside party cadres in the region.

Global Times, a newspaper affiliated with the Communist Party’s flagship People’s Daily, also jumped in with an editorial to reassure the public, saying the government was tracking the situation closely and has made adequate preparations for all kinds of emergencies. The possibility of a direct attack on China, either by North Korea or the United States, is almost nonexistent, it said.

However, the paper pointed out that the situation on the Korean Peninsula was deteriorating and that “it’s necessary to prepare for the worst situation.”

“In particular, if war breaks out, the possibility of nuclear contamination on the peninsula cannot be ruled out,” it wrote in the article which has been taken down as Thursday. “This in particularly requires serious research into countermeasures, and we should also be frank and inform people about the real situation.”