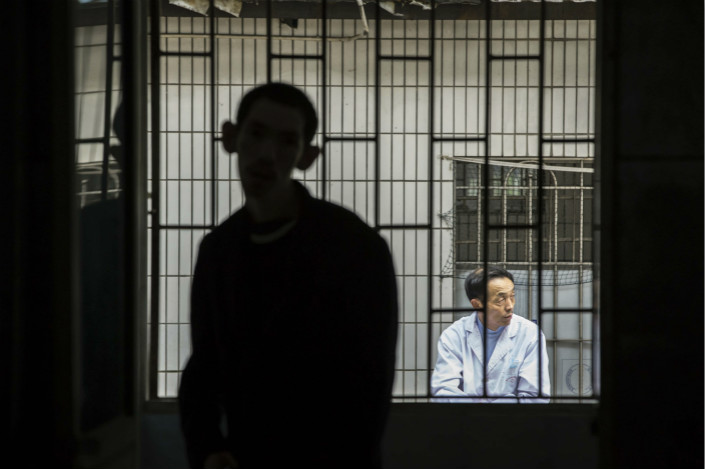 A patient and a staff member in a Guangzhou mental hospital. Under the new guidelines, prosecutors at all levels are obliged to conduct in-depth interviews with suspects who were detained in mental health wards before they were charged. Photo: VCG

The Supreme People’s Procuratorate released a regulation on Monday detailing requirements for prosecutor’s offices around the country to closely scrutinize police use of mental hospitals for detention of suspects and references in police reports to suspects’ mental health condition.

Under the new guidelines, prosecutors at all levels are obliged to conduct in-depth interviews with suspects who were detained in mental health wards before they were charged. They are also required to question police officers, hospital staff involved in the institutionalization, doctors, counselors and immediate family and relatives to uncover potential abuses.

Prosecutors should order corrections if a questionable diagnosis is offered by mental health facilities or there are doubts about police claims regarding a suspect’s mental disability, according to the document.

The guidelines are an addition to a similar set of rulings released tentatively by the supreme procuratorate in 2016 though the top prosecutor’s office didn’t say what has prompted the latest move.

However, it comes amid reports that say petitioners and activists are being locked up in psychiatric facilities by police to prevent them from airing their grievances heard or to put a stop to their activism.

In one high-profile case, Xu Lindong, a farmer-turned-petitioner in Luohe, Henan province, was locked up in a psychiatric hospital without a proper mental health assessment by accredited psychiatrists in late November 2003 — and remained there for 6 1/2 years — at the order of local police in collusion with the government-run facility.

It wasn't until July 2007 that he was able to see his family, who petitioned various authorities to secure Xu’s release some two years later.

There have also been reports in recent years showing suspects with personal connections to the police and mental hospitals, mostly run by the government, were abusing the mental hospital system to evade justice.

Although a revision to China’s criminal law in 2012 allows for the involuntary locking-up of suspects who are diagnosed with mental health problems at psychiatric hospitals, it only applies to those who continue to pose a threat to public safety.

Cases where mental hospitals are abused by police crop up from time to time, according to Zhang Jianwei, a law professor at Tsinghua University in Beijing. Most of the suspects who are incarcerated in such facilities are individuals who aren’t formally charged like petitioners who submit complaints to government agencies and judicial authorities when their rights are violated by local officials, Zhang said.

Tackling abuses at psychiatric facilities before prosecutors step in remains a challenge for law enforcement officials, according to Zhang.