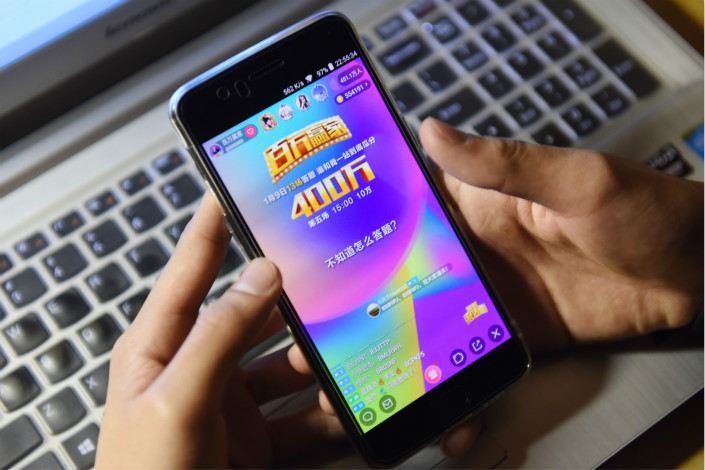 Baidu Inc. and Sohu.com Inc. became the first internet companies to put online quizzes back online after the central government suspended all such apps earlier this month. Photo: VCG

The quizzes were inspired by the popular New York-based HQ Trivia app. Players on these livestreaming apps answer multiple-choice questions in order to get a share of a cash prize that can reach as much as hundreds of thousands of dollars. Those who get the questions correct within the 10-second limit move on, and the rest are eliminated until a final few winners remain.

These games were available on about a dozen apps in China, which became very popular as the year began. But the quizzes encountered a hurdle on Feb. 14 when the top press and television regulator announced (link in Chinese) it would “clear and rectify” the nascent industry.

Some of the trivia apps didn’t have the official certificate required to host online livestreaming shows, and some asked “vulgar” and “sleazy” trivia questions to drive traffic, according to the State Administration of Press, Publication, Radio, Film and Television.

All apps that ran livestreaming quizzes subsequently suspended their offerings. Some of the apps had recently been released to ride the games’ wave of popularity without obtaining any official certification.

Internet giants Sohu and Baidu, which had both acquired the critical certificate by the end of 2016, according to a list released by the regulator, reopened their trivia games over the weekend. The others are reportedly in negotiations with the government.

Authorities have previously criticized these quizzes on a smaller scale. In January, one such operator, Huajiao, was ordered by the Beijing internet regulator to amend a question in which Hong Kong and Taiwan were categorized as countries.