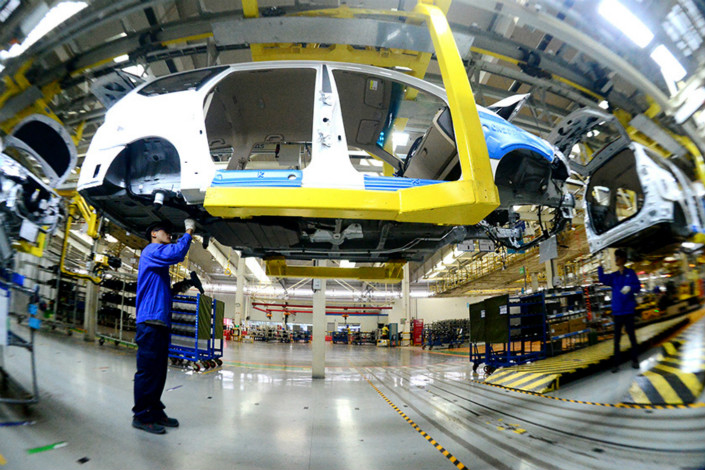 An NBS analyst attributed the slowing expansion in both manufacturing and services to the Lunar New Year holiday. Photo: VCG

*China’s official manufacturing PMI declines to 50.3 in February from January’s 51.3

*China official nonmanufacturing PMI drops to 54.4, down 0.9 points from January

(Beijing) — Expansion in China’s manufacturing sector hit a 19-month low in February, as the still-robust areas of services and construction lost some momentum, official data showed on Wednesday.

The official manufacturing purchasing managers index (PMI) declined for the third straight month in February to 50.3, down from 51.3 in January and marking its lowest reading since July 2016, according to figures from the National Bureau of Statistics (NBS). A number above 50 indicates that activity expanded, while anything below that means a contraction in manufacturing activity.

The official nonmanufacturing PMI, which covers both the services and construction industries, dropped to 54.4 in February from January’s 55.3, which was the highest reading since September, according to the NBS.

An NBS analyst attributed the slowing expansion in both manufacturing and services to effects of the seven-day Lunar New Year holiday, which fell in February this year.

“Based on the historical data, PMI figures could see a correction during the month of the Spring (New Year) Festival. The decline of the index in February is within the normal range,” Zhao Qinghe, a senior analyst with NBS, said in a research note.

But other economists seemed more pessimistic about the sharp decline in the growth of manufacturing activity, arguing it shows “a broad weakening in demand,” according to a research note from research firm Capital Economics.

“The lower PMI readings for February may be partly due to Chinese New Year,” Julian Evans-Pritchard, senior China economist with research firm Capital Economics, said in a research note. “But even if we account for such volatility by averaging across the first two months of the year, the data still point to a clear slowdown in early 2018,” he added.

“Although a recovery looks possible in the short-run as the anti-pollution campaign winds down, the risk is still that the economy faces worse this year than is generally expected,” Julian said.

Deng Haiqing, an analyst with JZ Securities, also predicted that the Chinese economy will face more downward pressure in 2018, as the economic recovery, which started in 2016, has passed its peak.

“The sharp decline in February’s official manufacturing PMI from the previous month reflected a weak economic start in 2018,” Deng Haiqing said in a research note. “The lowest reading of (official PMI) since 2016 July was due to the sharp drops in output and new orders,” he added.

The output sub-index fell to a two-year low of 50.7 in February, down from January’s 53.5 and 3 points lower than the same period a year ago. The new orders sub-index also logged its lowest reading since September 2016.

“Meanwhile the price indexes also pointed to a further easing of producer price inflation,” Julian said, writing that the fact that the input costs and output prices sub-indexes declined from January’s levels may suggest that industrial profits may be squeezed in the following months.

The independent Caixin manufacturing PMI will be published on Thursday and the Caixin China General Services Business Activity Index will be released on Monday.