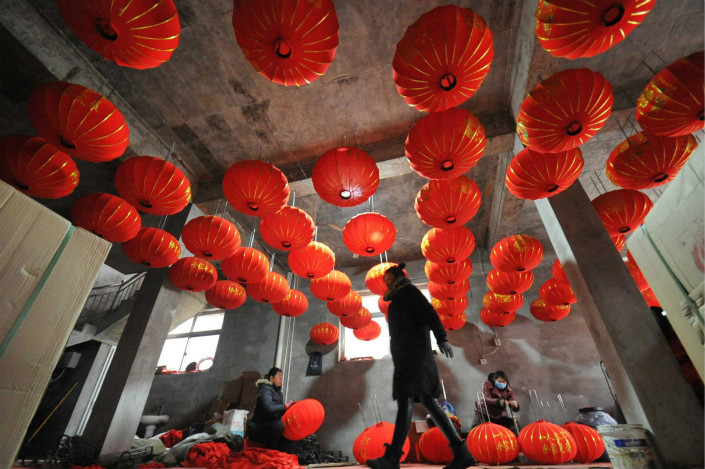 Workers step up production of red lanterns at a factory in Yuncheng, Shanxi province, on Tuesday. While the official manufacturing purchasing managers index (PMI) declined for the second straight month in January, the official nonmanufacturing PMI rose for the third month in a row. Photo: VCG

The official manufacturing purchasing managers index (PMI) declined for the second straight month in January to 51.3, the lowest reading since May, according to figures from the National Bureau of Statistics (NBS). A number above 50 indicates that activity expanded, while anything below that signals it contracted.

But the official nonmanufacturing PMI, which covers both the services and construction industries, rose for the third month in a row to 55.3 in January, the highest since September, according to the NBS.

The strength in nonmanufacturing sectors cushioned the impact from the slowing growth in manufacturing, with the composite PMI output index — formally unveiled by the NBS on Wednesday to measure changes in production and business volumes across the two industries — coming in at 54.6 in January. The NBS also published figures of the index for the 12 months prior to January. This month’s reading was unchanged from December’s.

The decline in January’s manufacturing PMI was mainly the result of softening growth in new orders, particularly as foreign demand contracted for the first time in 15 months.

“External demand growth retreated following the rush of the holiday season orders,” they said in a note. “The export growth in January-February may be distorted by the shift of the Lunar New Year.”

The Lunar New Year, also known as the Spring Festival, falls on Feb. 16 this year, more than two weeks later than in 2017.

Growth in production at manufacturing companies also slowed in January, and the size of their aggregate payroll shrank further. Inflation in both input costs and output prices eased by similar margins.

NBS analyst Zhao Qinghe said that more companies reported a short supply of labor this month as the Spring Festival approached. He added that a higher percentage of manufacturers than in December said “volatilities” in the Chinese currency “impacted on their business activity negatively.”

In the onshore spot market in January, the yuan appreciated by more than 3% against the U.S. dollar, the biggest monthly gain since its revaluation in 1994. The strengthening of the redback means Chinese exports were more expensive and less competitive to price-sensitive consumers.

The resilience in the nonmanufacturing sector was underpinned by stable demand and prices charged, as well as companies’ growing optimism about their prospects.

However, economists remained concerned that cooling expansion in manufacturing could be a sign of weakening growth in the overall economy.

“As the official activity data (industrial production, fixed-asset investment and retail sales) are largely related to growth in the manufacturing sector, we still believe overall growth momentum in January is likely to moderate,” Nomura International analysts Zhao Yang and Wang Lisheng wrote in a report.

The Chinese economy grew 6.9% last year, the first acceleration in seven years. But many analysts expect expansion to slow this year due to trade tensions with the U.S., as well as the Chinese government’s drive to deleverage the financial sector and reduce pollution.

Julian Evans-Pritchard, an analyst with research firm Capital Economics, said manufacturing activity may recover after the government’s anti-pollution campaign, which has forced many factories in northern China to suspend production in winter to reduce smog, comes to an end. However, he warned such a recovery may not last due to policies to rein in debt growth, which are set to restrict the credit supply and affect the real estate market.

“But any rebound is likely to prove short-lived given that the drags on economic activity from slower credit growth and the cooling property market are set to intensify this year,” he said in a report.

The independent Caixin manufacturing PMI will be published on Thursday, and the Caixin China General Services Business Activity Index will be released on Monday.