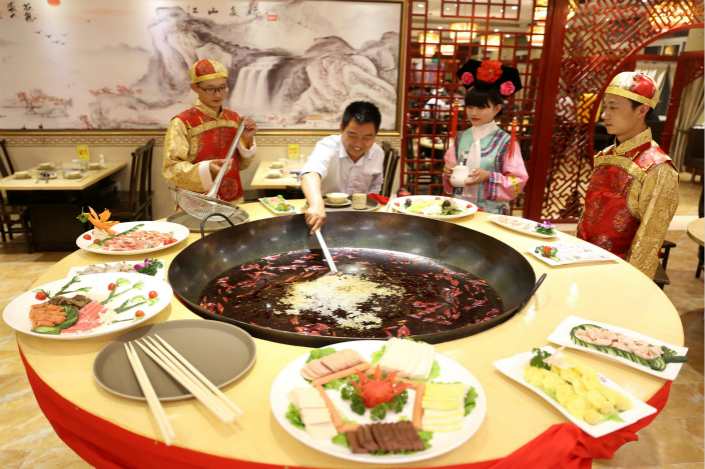 Rising business requirements led services providers to continue to expand their payrolls in December, although the rate of job creation was moderate. Photo: Visual China

China’s service activity expanded at its quickest pace in more than three years in December, a Caixin survey showed Thursday, a further sign of resilience in the world’s second-largest economy.

The Caixin China General Services Business Activity Index rose to 53.9 in December, up from 51.9 in the previous month and the highest reading since August 2014. A number above 50 indicates an expansion in activity, while a figure below that points to a contraction.

The services sector includes finance, real estate services, marketing, transportation and retailing. Also known as the tertiary sector, it accounted for 54.1% of the country’s economic output in the first half of last year, up from 51.6% in 2016 and 50.2% in 2015, according to the National Bureau of Statistics. The services sector is more labor-intensive than manufacturing, and policymakers are counting on it to create jobs.

Services providers last month enjoyed the strongest upturn in new orders since May 2015, with around 14% of monitored firms reporting an increase. The rising business requirements led the companies to continue to expand their payrolls in December, although the rate of job creation was moderate.

The increase in average input prices for the services sector matched the rate seen in March last year and was the fastest in nearly four years, as costs of raw materials, transportation and salaries went up. Service providers continued to raise prices in an attempt to pass on a greater share of their costs to customers, though at a rate similar to those seen in the previous two months.

The Caixin China General Manufacturing Purchasing Managers’ Index (PMI), which was published on Tuesday, came in at 51.5 for December, the highest in four months.

The solid expansions in manufacturing and services pushed the Caixin China Composite Output Index, which covers both manufacturers and service providers, to increase to a one-year high of 53 in December.

But he cautioned that uncertainties remain mainly due to potential changes in government policies. “Special attention should be paid to whether future policies will become tighter than expected.”

The Chinese government has listed curbing risks, especially financial risks, as a priority for the next three years, as well as reducing poverty and pollution. At last month’s annual Central Economic Work Conference, which was chaired by President Xi Jinping, top policymakers vowed to keep a tighter grip on the money supply — a more hawkish message than at the previous year’s meeting — as they pledged to focus on creating “high quality” growth.

China’s gross domestic product (GDP), a measure of economic growth, rose by 6.8% year-on-year from July to September, slowing from a 6.9% pace in the first and second quarters. It was the first slowdown in growth since early 2016.

Analysts widely expect the government to marginally lower its economic growth target and stick to a tightening monetary policy stance in 2018, although it will be ready to open the lending tap if the economy flags more than policymakers are prepared to tolerate.

The government is scheduled to release GDP growth figures for the fourth quarter on Jan. 18.