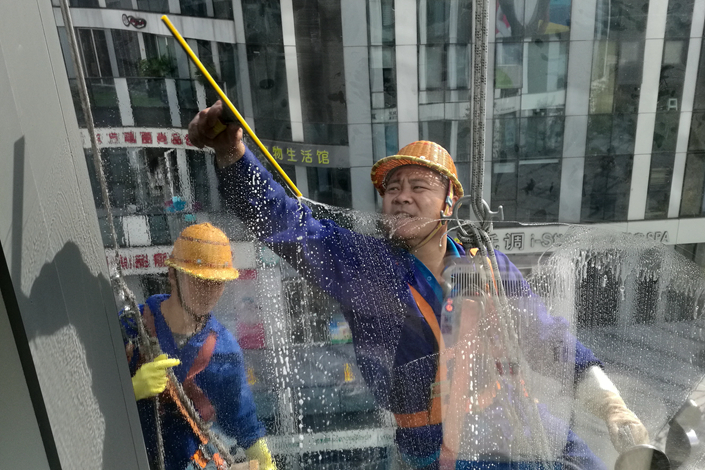 Window cleaners at work outside a building in Beijing on Oct. 12. Photo: Wu Gang/ Caixin

Activity in China’s services industries expanded at the fastest pace in three months in November, providing some support for the economy amid a slowdown in the manufacturing sector, a Caixin survey showed Tuesday.

The Caixin China General Services Business Activity Index rose to 51.9 last month from 51.2 in October, marking the second month of acceleration and the highest reading since August. Even so, November’s reading was still significantly weaker than the historical average of 54.6.

A number above 50 points to an expansion in activity, while anything below that indicates a contraction.

Bolstered by the improvement in the service sector, the Caixin China Composite Output Index, which covers manufacturing and service companies, rebounded to 51.6 from October’s 16-month low of 51.

The Caixin China General Manufacturing Purchasing Managers’ Index, released on Friday, dipped to 50.8 in November from 51 in October on slower growth in new orders, while companies’ confidence in the business outlook sank to a record low.

“The Caixin PMI readings in November showed the economy has maintained stability, and there was no imminent risk of a significant decline in the growth rate,” said Zhong Zhengsheng, director of macroeconomic analysis at CEBM Group, a subsidiary of Caixin Insight Group. “But we should be cautious because the economy may come under rising inflationary pressure at the start of next year due to continued price increases.”

New orders received by Chinese services providers rose at the fastest rate in three months in November, with a number of firms attributing increasing sales to new client wins and promotional activities, the survey showed.

Greater operational requirements contributed to quicker job creation in the services sector, with the employment subindex rising to the highest level since August.

The services sector — which includes finance, real estate services, marketing, transportation and retailing — has become an increasingly important part of the Chinese economy, reflecting a shift away from traditional heavy-industry manufacturing and exports.

Also known as the tertiary sector, it accounted for 51.6% of the country’s economic output in 2016, up from 50.2% in 2015, and contributed to nearly 60% of growth in the gross domestic product, according to the National Bureau of Statistics. The services sector is more labor-intensive than manufacturing, and policymakers are counting on it to create more jobs.