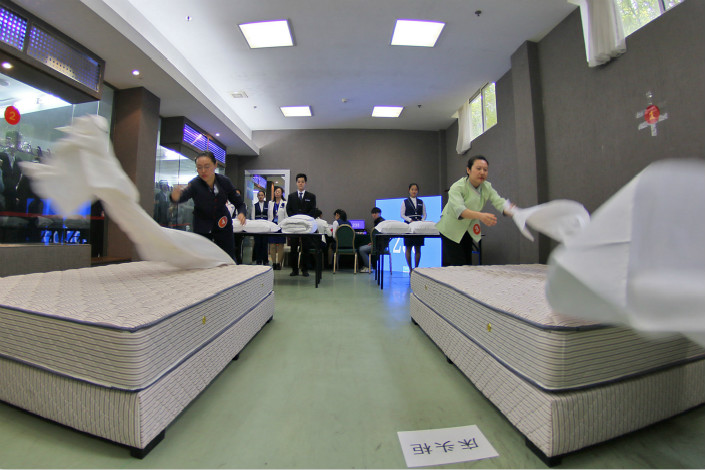 Expansion in China’s services activity picked up in October but was among the weakest rates in nearly two years, another sign of the cooling of the world’s second-largest economy, a Caixin survey showed Friday.

The Caixin China General Services Business Activity Index rose to 51.2 last month from 50.6 in September, which was the worst reading since 50.2 in December 2015.

While it still sat above the “50” mark that divides expansion from contraction, October’s reading marked the second-slowest rate since the end of 2015.

Despite the uptick in the services sector, the Caixin China Composite Output Index, which covers manufacturing and services companies, fell to 51.0 — the weakest expansion in 16 months — from 51.4 in September, hit mainly by a slowdown in production by manufacturers, the survey showed.

October’s Caixin China General Manufacturing Purchasing Managers’ Index, published on Wednesday, came in at 51.0, unchanged from September, with strict government environmental policies fueling inflation and contributing to delays in the delivery of supplies. The subindex of output weakened to a four-month low.

“The Caixin PMIs for October showed that the economy had a relatively weak start to the fourth quarter,” said Zhong Zhengsheng, director of macroeconomic analysis at CEBM Group, a subsidiary of Caixin Insight Group. “However, monetary policy is unlikely to be loosened unless major downside risks emerge.”

Chinese officials have signaled a shift in priorities regarding economic growth, with more emphasis placed on quality than speed. The change could see the government become more tolerant of slower expansion and less likely to resort to stimuli.

The Chinese economy grew 6.8% year-on-year in the July-through-September period, down from a 6.9% pace in the first and second quarters and the first moderation since early 2016. Analysts expect the slowdown to continue as investment growth cools, industrial output is held back by official campaigns to remove excess capacity and cut pollution, and the government maintains curbs on the property market.

The survey of the services sector, sponsored by Caixin and compiled by international information and data analytics provider IHS Markit Ltd., showed that new business increased at the slowest rate in three months in October while job creation accelerated only moderately from September.

Input cost inflation hit its highest point in four months while services providers raised the prices they charge at the fastest rate since August 2015, although the pace remained modest.

The services sector — which includes finance, real estate services, marketing, transportation and retailing — has become an increasingly important part of the Chinese economy, reflecting a shift away from traditional heavy-industry manufacturing and exports.

Also known as the tertiary sector, it accounted for 51.6% of the country’s economic output in 2016, up from 50.2% in 2015, and contributed to nearly 60% of growth in the gross domestic product, according to the National Bureau of Statistics. The services sector is more labor-intensive than manufacturing, and policymakers are counting on it to create more jobs.

The official manufacturing PMI, which covers the services industry and the construction sector, declined to 54.3 in October from September’s over-three-year-high of 55.4, according to NBS announcement on Tuesday.