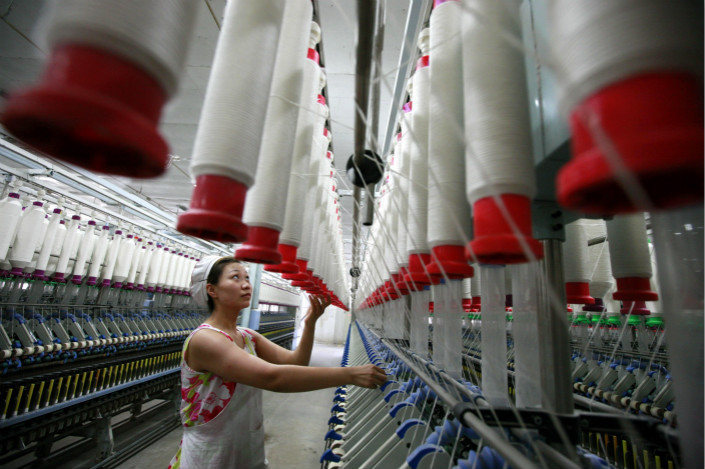 The official Manufacturing Purchasing Managers Index fell to 51.6 in October, the weakest reading since July. Above, a textile mill in Huaibei, Anhui province, creates textile products that are exported to Europe. Photo: Visual China

China’s manufacturing activity expanded for the fifth consecutive month in October, with strict government environmental policies fueling inflation and contributing to delays in the delivery of supplies, a Caixin survey released on Wednesday showed.

The Caixin China General Manufacturing Purchasing Managers’ Index — closely watched by investors as one of the first available barometers for the health of the world’s second-largest economy — was 51.0 last month, unchanged from September. A number above 50 indicates an expansion in activity, while a reading below 50 points to a contraction.

An acceleration in new orders, including those placed by overseas customers, was offset by a decline in the production subindex, which had its weakest reading in four months.

“China’s manufacturing sector expanded steadily in October,” said Zhong Zhengsheng, director of macroeconomic analysis at CEBM Group, a subsidiary of Caixin Insight Group. “But the stringent production curbs imposed by the government to reduce pollution and relatively low inventory levels have added to cost pressures on companies in midstream and downstream industries, which could have a negative impact on production in the coming months.”

The government has been intensifying its nationwide campaign to cut pollution, which has led to stricter controls on capacity and on production by high energy-consuming and polluting industries such as coal, steel and aluminum. Additional curbs are being imposed on these sectors over the winter months starting in mid-November as the heating season exacerbates the smog over northern China.

Xi Jinping, the head of the ruling Communist Party and China’s president, last month listed “a fundamental improvement in the environment” and “building a beautiful China” as some of his main goals for the country’s development through 2035.

The central government has carried out four rounds of “environmental protection inspections,” starting in July 2016, sending officials across the country to crack down on illegal discharges and emissions. The latest round, which started in August, has seen more than 360 people detained and 9,100 firms punished, with fines topping a total of 465 million yuan ($70.1 million) by mid-September, the government has said.

Companies who took part in the Caixin PMI survey said that environmental inspection policies and low stock levels among suppliers were a factor in delays in companies receiving the raw materials and components they needed in October and contributed to a spike in average purchasing costs.

The subindex of suppliers’ delivery times in October’s survey remained below 50, where it’s been since September 2016, while the gauge of input prices, although slightly lower than in September, showed one of the highest readings since early 2011.

Inflationary pressure eased slightly in October, with manufacturers raising their selling prices to protect their margins but at a slower rate than the previous month, the survey showed. Employment in the manufacturing sector also continued to fall, extending the current stretch of job-shedding to a full four years.

Optimism about business prospects over the next 12 months waned in October, with the future-output subindex dipping to a three-month low and showing the second-weakest reading since August 2016, the Caixin survey showed.

China’s gross domestic product (GDP), a measure of economic growth, rose by 6.8% year-on-year in the July-through-September period, down from a 6.9% pace in the first and second quarters and the first moderation since early 2016.

Although growth is still set to exceed the government’s full-year target of “around 6.5%” this year, analysts expect further moderation in the fourth quarter and in 2018 as the government deepens its supply-side reforms, maintains a tight grip on the property market and continues with a campaign to rein in mounting debt levels in the economy.

The country’s leaders have signaled a shift in priorities regarding economic growth, with more emphasis placed on quality than speed. In a speech last month to the 19th Party Congress outlining his vision for China over the next three decades, Xi stopped short of following his predecessors in setting a long-term target for GDP growth.

The latest reading of the Caixin manufacturing PMI compares with a decrease in the official PMI released by the National Bureau of Statistics (NBS) on Tuesday. The NBS gauge dropped to 51.6 from 52.4 in September.

Zhao Qinghe, an analyst with the NBS, also attributed the decline partly to local authorities’ strengthened efforts to fight pollution, noting that the PMI reading for high energy-consuming and highly polluting industries falling to 49.2 last month from 51.3 in September as the enterprises cut or suspended production to comply with government orders.

The Caixin PMI, sponsored by Caixin and compiled by international information and data analytics provider IHS Markit Ltd., focuses more on light industry, while heavy industry makes up a larger share of the NBS survey. The geographic distributions of the companies covered in the two polls are also different.

The official nonmanufacturing PMI, which covers the nation’s services and construction sectors, fell to 54.3 in October from 55.4 in September. The Caixin China General Services Business Activity Index will be published on Friday.