China Sees No Letup in Inflation 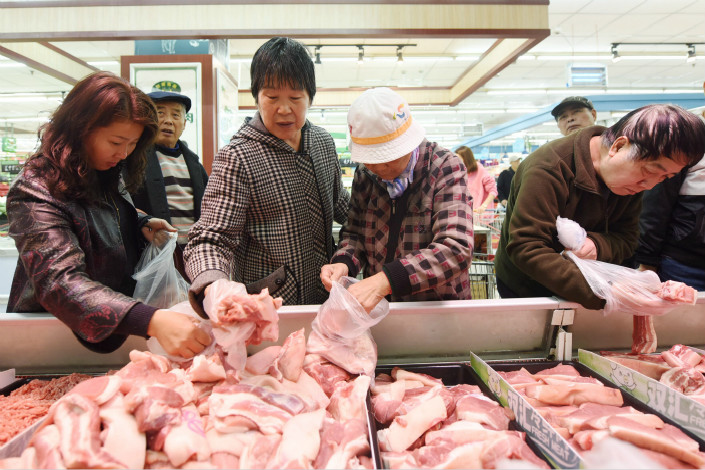 Food prices in China dropped 0.4% in October from a year ago, dragging the consumer price index down 0.08%. Above, supermarket customers buy pork in Hangzhou, Zhejiang province, on Thursday. Photo: IC

China’s consumer inflation hit a nine-month high in October while the increase in industrial prices remained elevated, official data showed on Thursday, but some analysts say inflationary pressure is unlikely to last long given the slowing momentum of growth in the world’s second-largest economy.

The consumer price index (CPI) jumped 1.9% in October from a year ago, the biggest increase since January’s 2.5%, the National Bureau of Statistics (NBS) said. Although the number beat the median forecast of 1.8% in a Bloomberg News survey of economists, it remains well below the government’s full-year inflation ceiling of around 3%.

The producer price index (PPI), which measures changes in the prices of goods bought and sold by manufacturers and mining companies, rose 6.9% year-on-year last month, the same pace as in September which was the fastest gain since March, NBS figures showed. It also exceeded economists’ median estimate of a 6.6% increase.

“Price pressures may remain strong for a while longer as the anti-pollution campaign keeps commodity prices elevated and this feeds through into core inflation. But with the economy likely to slow in the coming quarters and commodity prices set for an eventual correction, price pressures should start to ease before they trigger a policy response.”

Food prices, which have been declining since February, have been the main factor influencing the CPI. The drop in the food component of the CPI narrowed significantly in October, slipping by just 0.4% year-on-year after a 1.4% decrease in the previous month. The NBS said food, liquor and tobacco prices combined contributed almost 0.1 percentage point to the CPI reading in October.

Inflationary pressure was stronger outside of the food sector. Non-food prices rose 2.4% year on year last month, the same pace as September and the highest since January. Core CPI, which excludes the more volatile food and energy prices and which economists say better reflects the long-term trend in inflation, climbed 2.3%, unchanged from September’s pace which was the strongest level in six years.

Prices of transport fuel jumped 7.5% year on year in October, while the health care CPI, which includes medicines and medical services, rose by 7.2%, NBS figures showed.

Prices of medicinal ingredients such as vitamin D3 have surged this year as the pharmaceutical sector is one of the targets of the government’s anti-pollution campaign, the Beijing Business Today newspaper reported in September.

The medicinal ingredient industry is highly polluting as the manufacturing process leads to emissions of volatile organic compounds (VOC) — chemicals such as formaldehyde that can harm human health and the environment.

In the 28 northern cities targeted in a government campaign to curb air pollution, authorities ordered the sector and other VOC-intensive industries such as packaging and printing to upgrade their facilities to meet emissions requirements by the end of October. Those who failed to comply would be forced to suspend production, the Ministry of Environmental Protection said in August.

Producers of aluminum, steel and construction materials in these cities have also been ordered to reduce their output during the winter heating season that normally starts in mid-November and lasts for four months. The NBS figures showed that increases in prices of steel, non-ferrous metals, coal and paper led the year-on-year growth in PPI last month.

Zhong Zhengsheng and Zhang Lu, analysts with CEBM Group, a subsidiary of Caixin Insight Group, said they expect PPI growth to taper off due to ebbing demand and a high comparison base last year, while the CPI will see strong upward momentum over the next few months as the subdued inflation environment this year provides a low base for comparison in 2018.

"The focus of inflation expectations (in the coming months) will gradually shift back to CPI (from PPI), which will place more constraints on monetary policy," they said in a report.

Central banks are wary of accelerating consumer price inflation and can raise interest rates if it rises above their targets. The People’s Bank of China is unlikely to hike benchmark interest rates, especially as the headline CPI reading is still well below the government’s ceiling and economic growth is expected to ease next year. But it could maintain its tightening bias in monetary policy in spite of expectations for weakening economic expansion as the government continues its campaigns to deleverage the financial sector and slow the growth in corporate debt.

Analysts at China International Capital Corp., a Beijing-based investment bank, said there is potential for monetary policy “fine-tuning” with the latest CPI and PPI data indicating that inflationary pressure continues to build and may persist in the run-up to the Chinese New Year festival in February as food prices recover.

The government’s drive to curb excess industrial capacity and control pollution may also keep the PPI at a relatively high level as demand remains robust, they said.