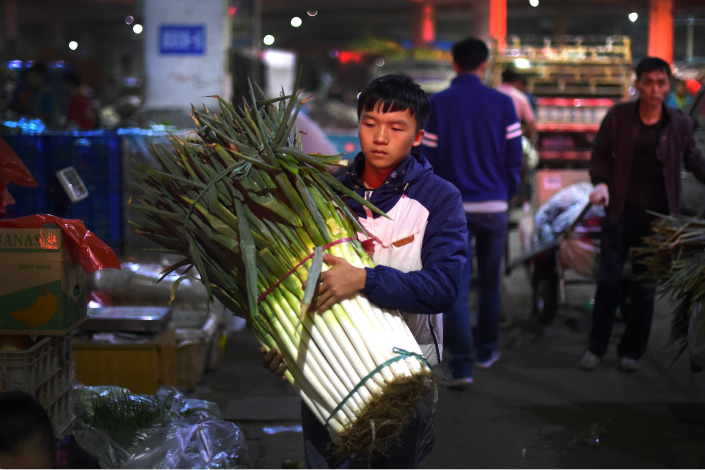 The consumer price index — a gauge of prices of a basket of consumer goods and services — rose 1.4% year-on-year, marginally lower than the 1.5% pace in June, as food prices continued to fall and nonfood costs increased the least this year. Above, a man carries scallions in Qingdao, Shandong province, in October. Photo: Visual China

(Beijing) — Increases in China’s prices at factory gates stabilized in July while consumer price gains eased, official data showed on Wednesday, suggesting that the surge in industrial inflation over the past year is subsiding.

The producer price index (PPI) — a measure of prices at the factory gate — rose 5.5% year-on-year last month, the National Bureau of Statistics said. That was the same rate as in May and June, and down from an eight-and-a-half-year high of 7.8% in February that was driven by a surge in global commodity prices and a recovery in China’s economy.

On a month-on-month basis, however, the PPI increased by 0.2%, returning to positive territory after falling for three straight months.

The consumer price index — a gauge of prices of a basket of consumer goods and services — rose 1.4% year-on-year, marginally lower than the 1.5% pace in June, as food prices continued to fall and nonfood costs increased the least this year. But the CPI rose 0.1% from June, the first month-on-month gain since April.

“Judging from the July data, CPI inflation pressure remained mild, with a modest sequential momentum,” Goldman Sachs economists led by Song Yu, wrote in a report, pointing to limited spillover into consumer prices from the jump in PPI inflation. “With a mild inflation environment, we expect the government to continue to maintain relatively steady … liquidity condition(s) to support growth, and we expect this bias to be maintained at least until the end of the Party Congress.”

China’s ruling Communist Party will hold a once-every-five-year Party Congress in the autumn, at which many senior leaders are expected to retire and be replaced.

China’s PPI returned positive territory in September on the back of a recovery in international commodity prices following a 54-month stretch of declines. The index has eased from February’s high as the commodity-price boom ran out of steam.

Meanwhile, domestic steel and coal prices have been soaring since the government embarked on an overcapacity reduction campaign last year to shut down money-losing and debt-laden steel mills and coal mines, causing a squeeze in supply of the materials.

The growth in steel prices has picked up since June, with the average spot price of 25mm domestic rebar, a key building material, hitting a more-than-five-year high of 4,000 yuan ($596) per ton at the end of July, according to Beijing-based metals information provider Antaike.

However, rebar sales volumes in the spot market have trended down recently because steel plants are reluctant to lower prices, given the favorable policy environment and the fact that downstream buyers are taking a wait-and-see approach after the rapid run-up in prices, economists with CEBM Group, a subsidiary of Caixin Insight Group, said in a report on Monday. “This has led to an uptick in steel inventory and will probably significantly contain rebar price rises,” they wrote.

Julian Evans-Pritchard, a Singapore-based analyst with research firm Capital Economics, said PPI growth last month was “almost entirely” driven by the recent rally in domestic steel prices that is “unlikely to be sustained,” adding that broader price pressures “appear to have cooled.”

“We expect the reflation of the past year to continue to fizzle out in coming quarters as policy tightening dampens economic activity,” he wrote in a research note. “This will disappoint those hoping for a sustained period of reflation that could help to erode corporate debt burdens.”

The jump in the PPI over the past year has been good news for companies in the heavy-industry and mining sectors as surging prices of commodities and industrial goods such as steel have boosted profits and help indebted businesses repay their debts. It’s not been a boon for manufacturers at the other end of the industrial chain, however, as they have been unable to pass on higher costs to consumers — the CPI has averaged 1.4% this year and was 2% last year.

Consumer price inflation remains benign, well below the government’s upper limit of 3% for 2017, with food costs continuing to drag on the CPI. Food prices have dropped for the last six months and fell by 1.1% year on year in July, while nonfood prices rose 2.0%, the weakest rate seen this year, NBS figures showed.

“Given low food prices and high PPI base from last year, overall inflation pressures should remain benign in 2017,” Ma Xiaoping, an economist with HSBC in Beijing, said in a note.

But ANZ economist David Qu said he expects year-on-year PPI to remain robust in the coming months as the campaign to cut excess capacity expands beyond coal and steel to include nonferrous metals, and as infrastructure investment holds up.

“The strong PPI indicates decent growth in corporate profits, especially for SOEs, leaving the authorities room for deleveraging,” he wrote in a report, referring to a government strategy to prioritize the reduction of debt ratios among state-owned enterprises.