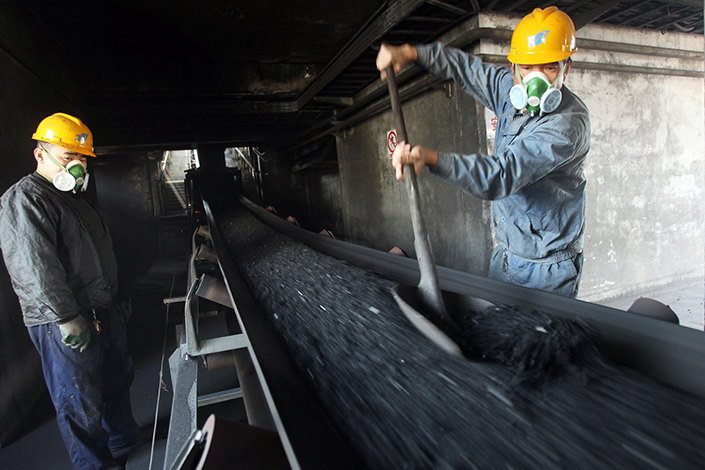 The producer price index gained 5.5% last month from a year ago and unchanged from May’s increase, which was a five-month low. Meanwhile, the consumer price index was up 1.5% year-on-year last month, and was the same as the increase in May. Photo: Visual China

(Beijing) — Inflation in China stalled in June as food prices declined while increases in the costs of key commodities, including coal and oil, slowed sharply from the previous month, official data showed on Monday.

The producer price index (PPI) — a measure of industrial inflation — gained 5.5% last month from a year ago and were unchanged from May’s increase, which was a five-month low, according to figures released by the National Bureau of Statistics (NBS).

The reading was in line with a median forecast of a 5.5% increase in June’s PPI by 11 economists polled by Caixin. The PPI had dropped for the previous three months in a row after peaking at 7.8% in February, dampening companies’ confidence in economic outlook and their profitability.

The consumer price index (CPI), which measures prices of a basket of consumer goods and services, was up 1.5% year-on-year last month, and was the same as the increase in May, which was the strongest since January. It also met the median projection for the CPI in the Caixin poll.

Beijing in March set this year’s target for CPI growth at around 3.0%. But the indicator has been lingering below that level for more than three and half years, triggering concerns over the potential for deflation, which is bad for economic growth because it will discourage consumers from spending in hopes that prices could go further down.

“Price pressures appear to have stabilised in June,” Julian Evans-Pritchard, an analyst with research firm Capital Economics, wrote in a report.

But he expects inflation to ease soon because softening credit expansion is likely to “weigh on economic activity in coming quarters.” A weakening PPI is set to add pressure on firms as the boost from higher commodity prices to their bottom line tapers off, he added.

“This will disappoint those hoping for a sustained period of reflation that could help to erode corporate debt burdens,” he said.

China’s broader money supply, or M2, grew at a record-low pace of 9.6% in May from a year ago, according to latest available data from the central bank. The slowdown came as regulators move to mop up the excesses within the financial system, which is sitting on a massive debt pile — as well as default risks — after years of credit-fueled economic growth.

M2 refers to cash and checking deposits — the so-called M1 — plus assets such as money market securities and mutual funds that can be converted quickly into cash.

In June, food prices, led by those of pork and eggs, declined 1.2% year-on-year. But the impact was offset by a 2.2% gain in nonfood prices such as education and medical care, NBS analyst Sheng Guoqing said in a statement.

However, they believe year-on-year growth in the PPI will fall further in the coming months as the comparison base in 2016 increases.

“Monetary policy is likely to remain neutral,” they wrote.

Costs of minerals and energy remained the main drivers of PPI, with coal leading the increases with a 33.2% surge. But prices charged by downstream sectors, including food manufacturing and textile, were still subdued with single-digit increases. That suggests consumer-goods producers were still having difficulties passing on climbing costs to their customers.

Meanwhile, even though prices of natural resources continued to go up, the increases in some of the key commodities such as coal, oil and natural gas slowed far more rapidly than the acceleration of gains in other goods, including ferrous metals and nonmetallic mineral products, dragging overall PPI growth.

Wen Bin, an economist with China Minsheng Bank, predicts PPI growth will decline to below 4% in the second half of the year when “the downward pressure on the economy becomes more evident and the demand for commodities drops.”

The NBS is scheduled to publish gross domestic product growth in the second quarter of the year next week. Economists widely expect it will retreat from 6.9% in the January-through-March period. The Chinese government has set a growth target for 2017 of “around 6.5% or higher if possible in practice.”