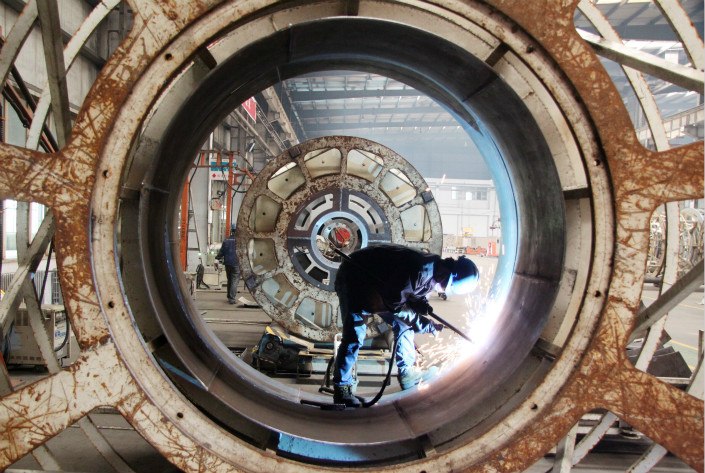 Optimism about business prospects over the next 12 months declined for the third consecutive month, with the future-output subindex falling to the lowest level since the indicator was included in the PMI report in April 2012. Photo: Visual China

China’s manufacturing activity expanded at its weakest pace in five months in November amid slower growth in new orders, while companies’ confidence in the business outlook sank to a record low, a Caixin survey showed on Friday.

The Caixin China General Manufacturing Purchasing Managers’ Index (PMI) dipped to 50.8 in November, down from 51 the previous month and the lowest reading since June.

The indicator is closely watched by investors as one of the first available monthly barometers of the health of the world’s second-largest economy. A number above 50 indicates an expansion in activity, while a reading below 50 points to a contraction.

While output expanded at a faster rate in November than in the previous month, new orders increased more slowly amid relatively subdued demand at home and abroad, according to the survey which is based on responses from more than 500 manufacturing companies.

Optimism about business prospects over the next 12 months declined for the third consecutive month, with the future-output subindex falling to the lowest level since the indicator was included in the PMI report in April 2012.

Zhong Zhengsheng, director of macroeconomic analysis at CEBM Group, a subsidiary of Caixin Insight Group, said that while the manufacturing sector was stable overall, the November manufacturing PMI pointed to some “signs of weakness.”

“In the fourth quarter, the economy is likely to maintain the stability observed since the start of the second half of the year,” he said. “Economic growth in 2017 is expected be higher than last year’s, but it may come under downward pressure in 2018.”

The government has imposed restrictions on output by many heavy-industry sectors such as steel and coal, and put curbs on road transportation, which creates more emissions than rail transport, to reduce air pollution in northern regions over the winter. These policies continued to have a negative impact on delivery times.

The delays, combined with higher raw material prices in international markets, kept the input price sub-index at an elevated level last month, although it rose at a less rapid rate than in the previous month. Companies responded by raising the prices they charge customers, although prices grew more slowly than input costs.

As demand cooled and cost pressure increased, manufacturers continued to reduce payroll numbers in November, with the rate of decline accelerating to the fastest in three months.

China’s official manufacturing PMI rose to 51.8 in November from 51.6 the previous month, as new orders and output expanded at a faster pace, the National Bureau of Statistics announced on Thursday.

The official non-manufacturing PMI, which covers services and construction industries, ticked up to 54.8 in November from 54.3 in October, according to the NBS. Activity was boosted by the annual Singles’ Day internet shopping spree that falls on Nov. 11, strong growth in sectors including internet software, information, and technology services and logistics, and increasing demand for construction. Caixin will release its services PMI on Dec. 5.

China’s gross domestic product (GDP), a measure of economic growth, rose by 6.8% year on year in the July-to-September period, down from a 6.9% pace in the first and second quarters and the first moderation since early 2016. Analysts widely expect a further moderation in the final three months of the year, although the full-year growth rate is still likely to exceed the government’s target of “around 6.5%” set in March.

The slowdown will continue into 2018 as the government moves forward with its supply-side structural reforms that include curbs on capacity in many industrial sectors.

Growth is also likely to be affected by the continuing efforts to control property prices to prevent a resurgence in housing inflation, the campaign to rein in the risky activities of financial institutions and policies that aim to slow the growth in corporate and local government debt.

Investment bank Goldman Sachs estimates the GDP growth rate will inch up to 6.8% this year from 6.7% in 2016 but will drop to 6.5% next year. Louis Kuijs, head of Asia economics research firm Oxford Economics, which also estimates GDP will increase by 6.8% in 2017, sees a slightly bigger slowdown in 2018 to 6.4%.