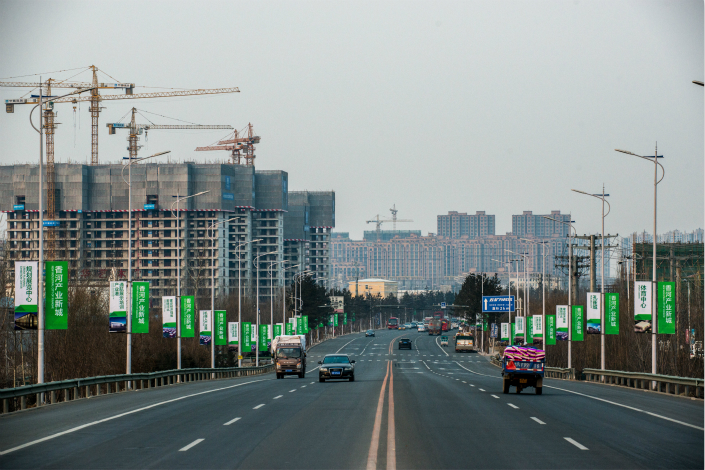 At the annual Central Economic Work Conference, Chinese policymakers usually decide on a target for growth in real gross domestic product, which is then announced in March by the premier at the National People’s Congress. Photo: Visual China

The Chinese government will probably lower the target for economic growth by a marginal amount and stick to a tightening monetary policy stance in 2018, although it will be ready to open the lending tap if the economy shows signs of flagging more than policymakers are prepared to tolerate.

That’s the consensus view forming among analysts ahead of the Central Economic Work Conference (CEWC), an annual meeting of top Communist Party and government officials and advisers to discuss economic policy priorities and goals for the coming year. The event usually decides on a target for growth in real gross domestic product (GDP), which is then formally announced by the premier at the National People’s Congress, China’s parliament, in March.

Although no date for the meeting has been officially announced, media reports have said it could begin as soon as Monday and last for three days.

Xi Jinping, the head of the Communist Party and the country’s president, has already given a hint of his priorities and set the tone for the CEWC. The all-powerful Politburo, a group comprising the party’s top 25 leaders chaired by Xi, met Dec. 8 to discuss economic work for next year. A report of the meeting carried by the official Xinhua News Agency said the most pressing task next year will be “warding off and addressing major risks to effectively control the macro leverage ratio,” a reference to the high debt levels in the country, especially among companies. Making the financial industry better serve the real economy was also at the top of the list.

Policymakers will continue to strike a balance between stable growth and risk control while pushing ahead with structural reforms, the report said. Instead of pursuing high growth numbers, the “fundamental objective” of economic policymaking will be to promote “high quality development,” the Politburo decided.

The meeting and statements by Xi since the 19th Party Congress in October have led analysts to expect the CEWC will set a slightly lower growth target and focus more on deleveraging the economy as the leadership prioritizes the need to keep financial risks in check.

The economy only needs to grow 6.3% annually to achieve the government’s goal of doubling GDP in 2020 from a decade ago, UBS economist Wang Tao said in a report last week. “As such, and since the government is also keen on continuing supply side reform and deleveraging, we think the growth target will be set lower and deemphasized,” she said.

Authorities could show flexibility by providing a growth range, or maintaining the “around 6.5%” goal set for this year but omitting the phrase “strive to achieve more,” she said.

Goldman Sachs forecasts a target of “around 6.5%,” as do economists at Mizuho Securities.

Many analysts believe policymakers will maintain a tightening bias in monetary policy in 2018 as they continue with efforts to deleverage the financial industry and possibly expand the drive to target the corporate sector, whose overall debt to GDP ratio is among the highest in the world.

“Both the fiscal and monetary policy will focus on debt control,” Raymond Yeung, ANZ’s Greater China chief economist, said in a note this week. “In addition to interbank liabilities, we believe the authorities will also target corporate deleveraging which will be regulated through macroprudential measures.”

ANZ forecasts the People’s Bank of China could raise key interest rates in the interbank market, the main source of funding for financial institutions, by 35 basis points next year, after hiking interbank borrowing costs by 5 basis points on Thursday, the first increase since March. The central bank acted hours after the U.S. Federal Reserve announced it was raising its benchmark interest rate by 25 basis points.

Economists at Standard Chartered bank predict the PBOC will increase interbank rates by 20 basis points in total next year through two or three small hikes to prevent the gap between U.S. and Chinese interest rates from widening too much.

“At some point in 2018, we think that the policy stance has to turn to easing to avoid an overly sharp real economic slowdown,” Societe Generale analysts Yao Wei and Claire Huang said in a report last week. “The timing really depends on policymakers’ pain threshold.”

Wang of UBS forecasts the government could loosen controls on infrastructure financing, for example, by allowing more issuance of project-specific local government bonds, and backing off on environment-related restrictions on industrial production.

Mizuho economist Shen Jianguang said more measures to improve the environment are expected to be imposed after the current government campaign to reduce air pollution in northern China ends in March.

“There will likely be more details on stringent emission controls after the CEWC meeting, which will put downside pressure on industrial production and manufacturing investment, especially in heavy and traditional industries,” he wrote in a report this week.

The Politburo meeting also agreed to “speed up the establishment of a long-term, effective mechanism” for the housing market, which has fueled expectations that policymakers may accelerate preparations for the introduction of the long-awaited national property tax — a tool that its backers believe could prevent the repeated cycle of property speculation and runaway price rises in big cities.

But ANZ’s Yeung was skeptical that the property tax, already in place on a trial basis in some cities, could be rolled out nationwide any time soon.

“We believe the government will still be cautious in executing such a proposal given the macroeconomic importance of the real estate sector,” he said.

Even if the government pushes for nationwide imposition of the tax, some regions will likely be exempt from the levy, he added.